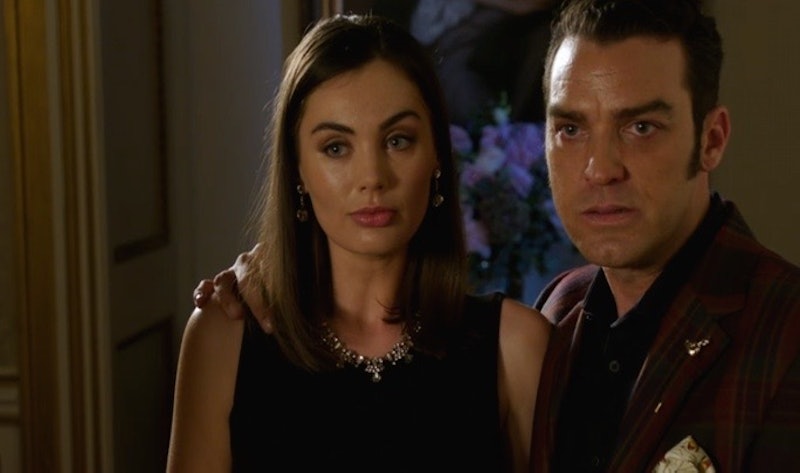 King Cyrus, even while battling cancer, was finally finding happiness on The Royals in the form of his maid Violet. But after his love was poisoned by the Grand Duchess, he moved on to plan B — bringing back Prudence to the palace on The Royals . Prudence revealed in the Season 1 finale that she was pregnant with Cyrus' child (from him using blackmail on her to perform sexual acts) and she showed up in the Season 2 premiere with a large baby bump asking Cyrus to make her son legitimate. But since then, Cyrus has been preoccupied by ruling his kingdom and loving Violet, and Prudence's appearance was an end-of-episode shocker in Jan. 3's "Be All My Sins Remembered."

Not only did Prudence return to the palace, but Cyrus announced he was going to marry her. And since the main reason that the Grand Duchess poisoned Violet was because she believed that Cyrus was going to propose to Violet, he also stunned her with this information. While his engagement to Prudence may just be a major revenge plot for the Grand Duchess killing Violet, it doesn't change the facts: Cyrus is engaged to Prudence and Prudence is going to have his son. That means that Cyrus will now have an heir (that isn't Penelope or Maribel) and a soon-to-be wife, which completely messes with Helena and the Grand Duchess' plans of making Helena queen.

I'm a big believer that if I don't see a body, the character can't be dead, so I'm not sold that the sweet maid Violet is actually dead. (Ted Pryce found her car with blood in it, but no body.) And I hope she's not dead since she did show a softer side of Cyrus. But let's be real — Cyrus is at his best when he's spewing hateful words and Violet's death may just be worth it since he got to deliver this line to Joan Collins: "Congratulations. You killed the wrong maid, bitch."

I don't think that Cyrus will be dillydallying with his marriage to Prudence since she is already pregnant with his baby, so it's sure going to be fun watching Helena and the Grand Duchess squirm. However, I don't think Prudence will be the solution to sustaining Cyrus' reign. Either the paternity of the baby is going to prove that Cyrus is not the father (hey – wasn't Prudence getting close to King Simon around that time?) or the paternity of Prince Liam is going to prove that King Simon is his father ... pretty much I think every child was fathered by King Simon. But if either of those scenarios happen, Cyrus will no longer be king and his revenge plan will have massively backfired. Plus, I'm hoping that Prudence gets to exact a revenge plan all on her own.