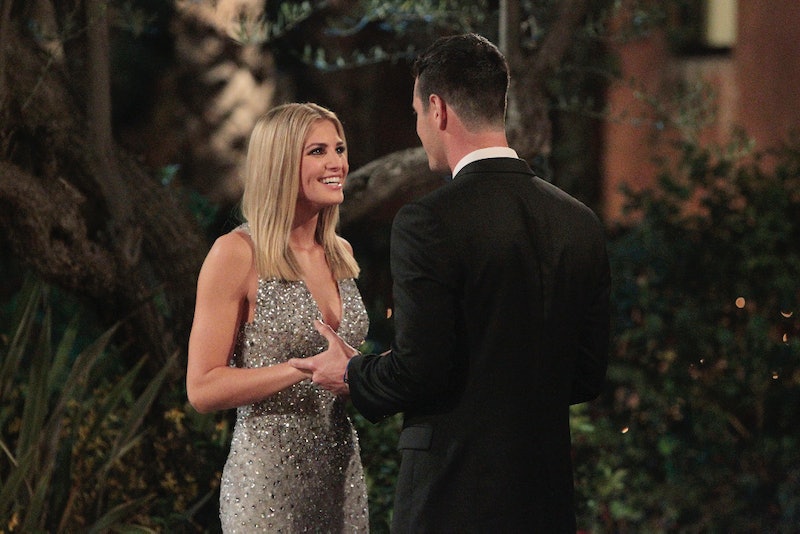 It’s become a three-year trend that at least one Bachelor contestant is a journalist of some type. First we had newscaster Amy Long attempting to charm Juan Pablo Galavis, then freelance journalist Ashley I. was ready to give it all up to move to Iowa with Chris Soules, and now we’re meeting broadcast journalist Olivia Caridi who wants to win over Ben Higgins. The Season 20 premiere of The Bachelor will introduce us to newscaster Olivia, but before that happens, which news station does Bachelor contestant Olivia work for? I did a bit of research, and while she took a bit of a break (presumably to film the show) she seems to be back at her old job.

After graduating from TCU in 2014, she moved out to Virginia where she became an on-air reporter at NBC’s WCYB affiliate. According to the news station's website, she anchored the weekend news and reported during the evening news during the week. It seems like this was her first full-time job since she graduated college. Before that she was a summer intern at WFAA-TV in Dallas and Fox Sports Southwest. So, what’s she been up to since the show stopped filming?

Her Instagram is somewhat new since her old account was linked to the news station. Her new account shows she’s been having a good time, and may have gotten back to work this week. She posted a photo from Virginia of her with a bunch of children. She captioned the photo, “My job is a blessing because I get to meet extraordinary people and spread the word about topics like child hunger. These angels from Wise Primary in Virginia go to school hungry, but because of some generous parents and the Lunchbox Project, they get a free snack at school.”

But, since her Facebook page still lists her as a former WCYB anchor, and she's talked about missing the station, perhaps she found work with another tv news affiliate. It looks like she’s back to the grind, but before that she took a bit of a break and did some of these things instead. Perhaps she was eliminated early from the show and thus found herself with time to spare before needing to return to work.

She Traveled A Bit

A little over a month ago, Olivia went on an Italian vacation to Rome, Florence and Pisa. She documented the trip at places like the Colosseum and The Trevi Fountain and she even attempted to push up the Leaning Tower of Pisa.

This year she celebrated the holidays with her family in her home state of Texas. She posted an adorable holiday photo of everyone together. “Last year, I anchored the morning show in Bristol, went to my apartment, sat next to my little Christmas tree and Skyped my family back home. This year, I'm blessed to be celebrating the holidays with them at home,” she wrote.

She’s been spotted supporting the volleyball team at University of Texas.

She knows how to shoot!

She also did a little Kayaking at the Muleshoe Bend recreation area.

Basically, Olivia has been living it up since her time on The Bachelor, and now she's back to the job she loves at another news outlet.