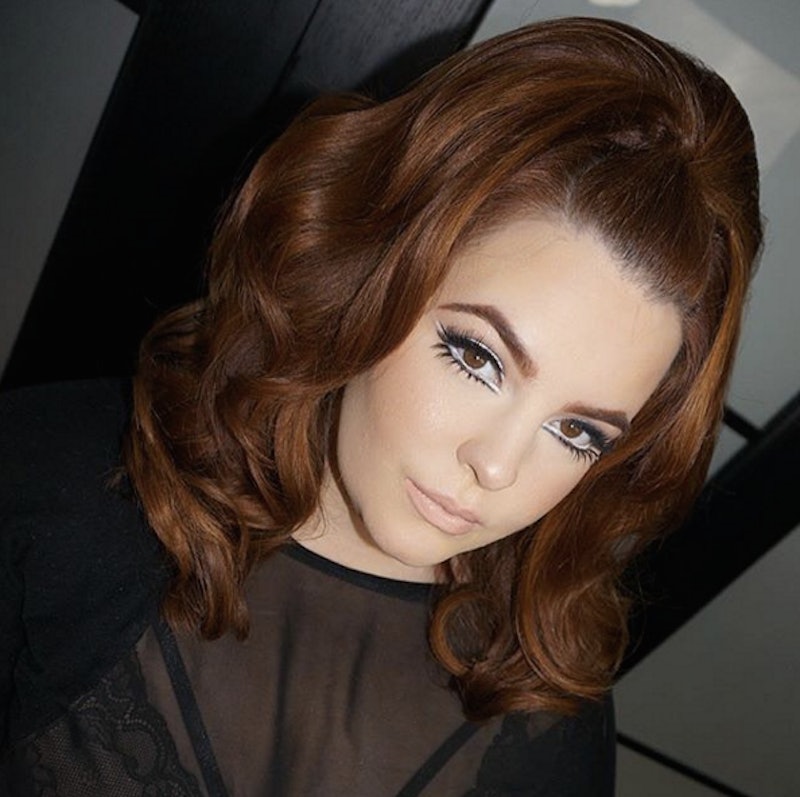 Throughout 2015, it seemed that story after story about plus size model Tess Holliday was hitting our news feeds — most of them quite positive. But in the last month or so, headlines about the model have revolved around a controversy that members of the body pos community have been discussing amongst themselves for over a year. A post on Reddit from early December aimed to shed light on discrepancies in the sales and delivery of Holliday's "Eff Your Beauty Standards" T-shirts, which she held pre-sales for in 2014 and of which an undisclosed percentage of proceeds were meant to be donated to the National Coalition Against Domestic Violence.

After Holliday sent an official statement to the publication, Refinery29 reported, "The scathing [Reddit] post accused Holliday of being a 'scam artist' for not delivering merchandise to 'hundreds of fans' (and of blocking those who reached out to Holliday via social media about their missing shirts), and that 'not a single cent went to charity.'"

The failure of approximately 140 orders compared to about 3,000 that were successfully delivered to customers came down to a number of factors, Holliday tells me in a phone conversation. During our chat, she never denies that T-shirt sales were not handled nearly as well as they should have been, noting, "One of the biggest problems was that our software was showing payment not received when people had paid for it." Other issues included Holliday and her team's inexperience handling such a large-scale operation. "I'm not a businesswoman, I had no idea of the realities of the task I had bitten off," she wrote in her statement. To the allegation in the same Reddit post that she blocked customers simply for bringing up issues with their orders, however, Holliday tells me, "People were saying I blocked them for complaining about not getting a shirt. But I was blocking people who were also telling me I should die, that I should take my own life, that I was scum."

When the Refinery29 article was published, many of the now 900+ members of Facebook group "Eff Your Customer Service" felt disheartened about the publication allegedly not reaching out for comment to customers. One member wrote, "I am wondering if we should go back to Refinery29 with a statement from the group telling our side of the story as they did not contact any of us to get the whole truth." This Facebook page was initially started as a platform for customers hoping to share their inquiries and concerns regarding lost merchandise, and who subsequently felt that the R29 story was "a bias piece that [...] wouldn't bother hearing us out," according to the same member's public post.

The author of the R29 story has yet to respond to Bustle's request for comment about whether or not the customers were contacted. And when I posted a request for comment for this article on the Eff Your Customer Service page, only a handful of people came forward to discuss their experiences with T-shirt sales, despite one of the page's moderators commenting on my post to say, "I'd hate for [this] to get lost in the shuffle given how badly some women here wanted the opportunity to tell their whole side of the story when R29 came out."

Of the four individuals I heard from, one group member wanted to discuss her opinion that Holliday's "story from being bullied at high school is based on a lie." Another simply told me, "I pretty much gave up on getting any money back a while ago," but wasn't able to add whether she'd requested a refund through Rachel Kacenjar, owner of Re/Dress boutique, the current drop ship point for Eff Your Beauty Standards merchandise. Kacenjar had publicly posted, "If you didn't get your stuff, please contact me! customerservice@redressnyc.com," on the group page. And two customers expressed concerns about the lack of a public apology by Holliday herself.

As group member Mel Daugherty tells me in the comments of the public inquiry I posted on the page, "I'm glad that people love her and find her to be a positive influence, but I also wish that people would stop thinking that a role model needs to be infallible or untouchable [...] I personally just want her to acknowledge that she messed up." Group member and YouTuber Mere of Ladygrumbles also sent me a direct message on Facebook. Although we were unable to chat further about her experiences with the tees, her "I'm Not Buying, Tess" video also touches upon the desire for an apology and transparency.

Holliday did apologize in the official statement she sent to me (and, she alleges, to R29), saying, "I’m sorry that I have disappointed some of you, and I’ve learned a lot through this experience. This has been a difficult year, but I can say with 100 percent certainty that my team and I are on solid footing and appreciate everyone’s understanding and continued support. I will continue to spread the message of self love." In the phone conversation with me, she adds, "I’m sorry for everything that’s happened, and I wish that things hadn’t gone this way. I wish everyone had gotten their order seamlessly. I wish I had had more knowledge before going into this. It’s really hard to see EYBS associated with something so negative, but I will continue to work on the issue."

The T-shirts were the largest scale production Holliday had ever overseen. Although she has run a successful Depop shop for some time now, where she has five-star ratings, the gravitas of these sales combined with a faulty operating system led to merchandise discrepancies. In May of this year, however, Re/Dress became the drop ship point for the Eff Your Beauty Standards tees, with Rachel Kacenjar at the helm. Besides helping elevate the voices of independent artists and designers through her plus size-centric boutique, Kacenjar is vocal about feminist and body positive issues on her personal social media pages.

As a business owner with additional experience as a freelance and small business consultant, Kacenjar tells me via email, "I chalk up the mistakes to inexperience, taking on more than one person can handle, not having the right equipment/tools, and then not being prepared to handle the aftermath or even just the day-to-day customer service that comes with a business that is fulfilling hundreds of orders at once." On her social media accounts, Holliday had also mentioned concerns over international orders being lost, to which Kacenjar says, "I think [she] was under the impression that there were a handful of orders that got lost in the mix due to an international shipping snafu, but it turned out that there were a lot of backend issues with TessMunster.com that needed handling."

Since the two began working together, Kacenjar tells me that the amount of outstanding customer issues remaining is "less than 1 percent of total orders we've received. It's possible someone has fallen through the cracks, but between my retrieval of past order data and emailing folks to make sure they got their stuff and the Eff Your Customer Service group finding folks, we've been able to reach nearly all of Tess' past customer base." She adds, "After folks have been disenfranchised to some extent, its been nice to be able to make some part of the resolution easy on them."

In terms of the donation Holliday promised to make to the National Coalition Against Domestic Violence, Kacenjar confirms that Holliday had been "planning to give at the year's end once the T-shirt orders had been replaced and taken care of and her total taxes were accounted for." NCADV's Development Manager Dina Coates Koebler confirms to me via email, "A donation in the amount of $1,000 was made to our organization on 12/13/2015 by Ms. Hoven," (Holliday's birth name being Ryann Maegen Hoven).

Moving forward, both Holliday and Kacenjar are committed to rectifying any remaining order issues. A "Missing Order Form" is available online now, and inquiries can still be sent directly to Re/Dress' customer service email address (customerservice@redressnyc.com). Holliday tells me that this has all "been a very humbling and I’ve learned a lot," and while the Eff Your Beauty Standards tees are no longer available for sale, she does have a body positive clothing collection in the works. "I'm working hard to make sure [plus size women] don’t have to wear terrible prints," she tells me. "I’ve just been working hard to make people happy."