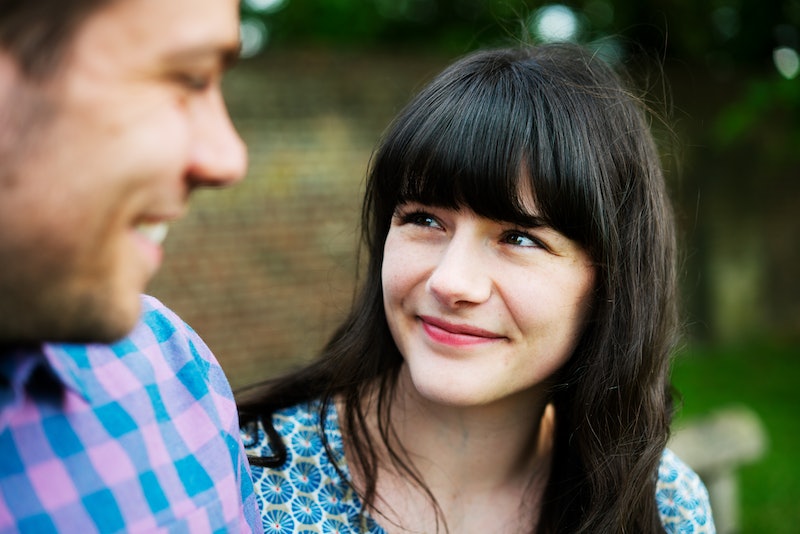 Even the most confident of us enjoy getting compliments from our partners and giving our partners compliments ourselves. But when there's so much complimenting going on, someone is bound to slip up at some point and say something insensitive — and backhanded compliments from your significant other can hurt even more than insults. When they criticize you, you can write it off as stemming from anger or moodiness, but when they accidentally imply something negative about you, you can start to suspect they actually think it.

As a warning, some people — most commonly pickup artists — intentionally give backhanded compliments in order to lower someone's self-esteem. For example, the pickup artist site Seduction Science advises men to feed women lines like “Your nose is a little red. You’re like an Eskimo. Cool.” If you ever get the sense that somebody is intentionally giving you backhanded compliments, run in the opposite direction. (Doubly so if they use the word "Eskimo," which is problematic all on its own.)

For the most part, though, I'm not talking about pickup lines. This list is focused on insults people give without knowing they're insults, including things that even you might say without realizing what it means. Here are some "compliments" that you probably shouldn't give your significant other.

This comment is often directed toward people who love their jobs and therefore spend a lot of time working or homebodies who prefer not to engage in highly social activities like clubbing. Really, only you can know if you're having enough fun, and if you're happy with your life, nobody else has the right to tell you that you should live it differently.

Telling someone you like them because of what they're not usually just insults other people rather than complimenting your significant other. For example, telling someone that you like that they're not superficial usually indicates that you've dated a lot of superficial people, not that they're particularly profound. When you compliment a woman on not having qualities that "your typical girl" has, you're also insulting women and therefore insulting her for being a woman.

This one also usually says more about your exes than it does about the person you're complimenting. It also implies that you don't like it when your significant other does call you out on something, and discouraging someone from confronting you is not the foundation of a healthy relationship. Maybe people who get mad "easily" are mad for a reason, and you should take their anger as an opportunity to improve your own behavior.

There comes a time in most relationships where you see each other drunk for the first time. During this time, for better or for worse, you may notice a new side to your significant other. Do not, however, imply that it is a better side, or they might feel boring when they're sober around you.

6. "You Look Good When You Wear Your Hair Like That."

After you say this, your significant other might be hesitant to wear their hair (or makeup or clothes or whatever you complimented) differently, since they now know you'll like it less. So just say "You look good," period.

This one's more of a euphemism than a compliment — because it's often a code for "I wish we didn't have to talk about your feelings so much." If you sign up to be in a relationship with someone, you've signed up to hear their feelings, no matter how many they have. That should be a good thing; it's healthy for your partner to communicate with you. So only mention it as a compliment if you mean it.

Nothing wrong with speaking your mind, but I have noticed that women often get this compliment just for having opinions. For this reason, the comment often an implied "unlike your typical girl" attached to it. Again, if someone's so extraordinary for having these basic positive traits, maybe you've just been dating the wrong people — and that's not a compliment to the person you're with now.

More like this
18 Hinge Prompt Answers To Try If You’re Looking For Something Casual
By Lexi Inks
12 Active Date Ideas That'll Get You & Your Boo Outside
By Lexi Inks
Here’s What TikTok's "Mascara” Trend Is *Really* About
By El Hunt
The 3 Zodiac Signs Most Likely To Get Married Later In Life
By Kristine Fellizar
Get Even More From Bustle — Sign Up For The Newsletter
From hair trends to relationship advice, our daily newsletter has everything you need to sound like a person who’s on TikTok, even if you aren’t.