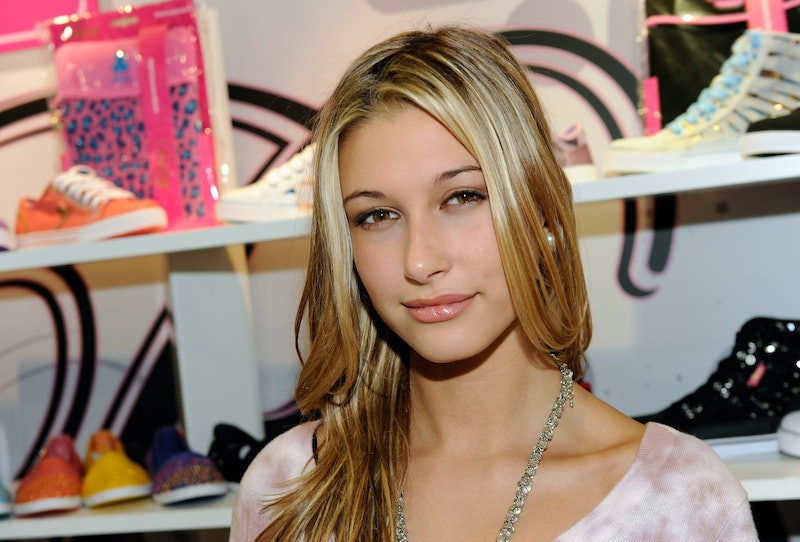 If you follow Hollywood news at all, it is almost impossible to not be aware of the rumors when it comes to Justin Bieber's love life. He has been repeatedly connected to his ex-girlfriend Selena Gomez, models from his music videos, models from Instagram, and, most shockingly, Kourtney Kardashian. It seems like all of young Hollywood agreed that New Year's Eve was the time to unveil their relationship statuses, because along with photos of Kendall Jenner on a yacht with Harry Styles, Justin Bieber and Hailey Baldwin kissed in a photo that was posted on the pop star's Instagram. This kiss was a long time coming, but how did Justin Bieber and Hailey Baldwin meet in the first place?

Until recently, I wasn't really sure who Baldwin was or what she did, but I definitely recognized her last name. The up-and-coming model and daughter of Stephen Baldwin got her family's good looks and started popping up in Kendall Jenner and Gigi Hadid's inner circle. And when she started hanging out with Bieber all over social media, it inevitably led to some romance speculation. But contrary to what you might have guessed, Bieber and Baldwin have been friends since they were young teens.

Being ridiculously good looking isn't the only perk of being a member of the Baldwin family, you also get to hang out on red carpets and meet your favorite pop stars. Her father introduced Baldwin to Bieber way back in 2009, when she was only about 13 years old (this would make Bieber about 15 at the time.)

My favorite part about the video of them meeting is how unenthusiastic Baldwin looks when meeting Bieber, which is very indicative of a normal 13-year-old. There are very little things that are impressive at that point in your life, even meeting one of the biggest pop stars in the world who millions of girls would die to meet is of little consequence.

Baldwin gave her own account of their friendship to E! News last year:

I've known him since I was so young — since I was like 13 — and we've just been good friends over the years... We have just stayed close and there's nothing more to it than that.

It seems like once she started hanging out with Kendall and Kylie Jenner that her relationship with Bieber got even stronger, since they are all part of the same friend group. Come to think of it, both Kendall and Kylie have also been rumored to date Bieber at some point, so they must have had some very interesting girl talks these past two years or so. Last year, Bieber even shot down rumors of he and Baldwin being a couple by uploading a photo with the caption, "People are crazy. I'm super single and this is my good friend u would know otherwise."

The current status of the 19-year-old model and 21-year-old singer seems to be a natural progression of their friendship. And judging by those NYE pics, they are ready to share the news of whatever is happening — whether permanent or just fun — so congrats to them!

More like this
Hailey Bieber Wore A Lacy Bustier & Matching Thong In New Campaign
By Allie Fasanella
Who Is Camila Cabello Dating? She's Getting Cozy With Lox Club CEO Austin Kevitch
By Radhika Menon
Kim Kardashian & Pete Davidson’s Relationship Timeline From Start To Finish
By Jordyn Tilchen and Bustle Editors
'A League Of Their Own' Star Abbi Jacobson Is Engaged To Jodi Balfour
By Jake Viswanath
Get Even More From Bustle — Sign Up For The Newsletter