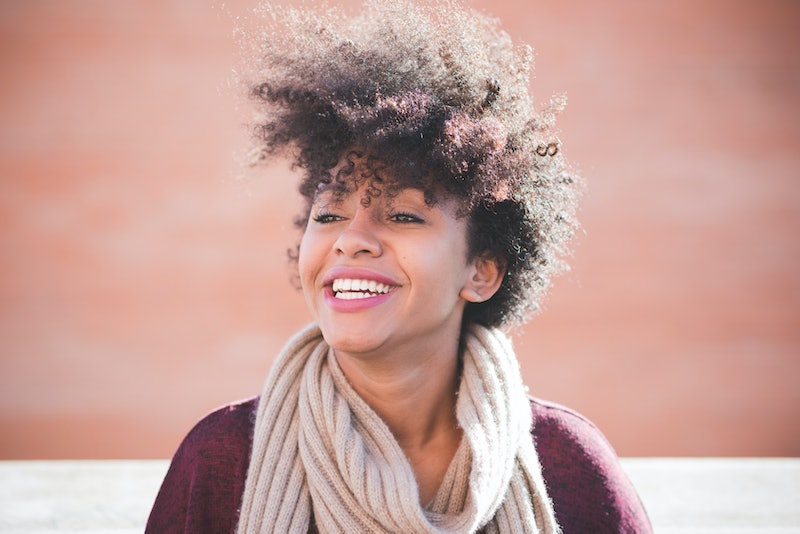 On New Year's Day a few of us went out for a late lunch, hungover and sleep-deprived, and the conversation turned, inevitably to being single and frustrated with dating. I was there with my girlfriend, whom I met on Tinder, and two of the other women were avid Tinder and online dating sites users. And one of my friends is planning on joining online dating for the first time this month. Or at least, she was.

Because listening to us talk about ghosting, dick pics, boring chat, awkward first dates, and being cancelled on, was, as she put it "super depressing." Whoops. And I get it, sometimes the dating world can seem really disappointing— especially if you've had a run of bad dates. But fear not, because the truth is, it's just not as bad as it seems. And I'm not just staying that because I met my girlfriend on Tinder, or because one of my friends recently got engaged to someone she met there, I'm saying it because of SCIENCE.

That's right, there's a whole lot of science that says the dating world isn't a gloomy place at all. Although single's guides and women's magazines like to make us all feel like lost spinsters with the odds stacked against us, I say BS. In fact, there are a lot of facts out there that will make you feel damned good about dating. Here are just a few:

1. Just Because You Aren't Attracted To Someone Initially, Doesn't Mean You Won't Be

That's right, before you get depressed that you don't have a spark with someone (or anyone!) initially, know that they may still be a viable option if you give it some time. In fact, Dr. Helen Fisher did a study of 5,000 Americans and according to BuzzFeed found that "54 percent of singles say they fell in love with someone they didn’t initially find attractive after a great conversation, or when they found they had a lot of common interests". There are a whole lot more options out there if you think nearly half of people have straight up fallen in love with someone they weren't initially attracted to. The world is full of possibilities.

If, like my friend, you tend to get a little down and think of apps or online dating as a last resort that means you've somehow failed, it's time to stop. For some reason the stigma with online dating hasn't quite disappeared, but it should. According to Aziz Ansari's Modern Romance "[B]etween 2005 and 2012 more than one third of couples who got married in the United States met through an online dating site. Online dating was the single biggest way people met their spouses. Bigger than work, friends, and school combined." So if you're feeling like you are alone, you really, really aren't.

Oh and guess what? That number jumps to nearly 70 percent when discussing LGBT couples. Really just as a numbers game, it's harder to meet people in real life, so the vast majority of those relationships form online. I can agree with this wholeheartedly, as a bisexual I met way more men than women in real life, but on apps it was split 50/50. If anything, it was just a more efficient way to meet other women interested in women.

4. But So Can Dating Someone You've Known For A Long Time

If online dating isn't your friend, have no fear. According to a Mic survey of 2,373-person 18- to 34-year-olds, 40 percent of couples said they were "platonic friends first" before getting together.

5. Men Really ARE Looking For A Relationship, Too

We often act like women are hunting for a relationships, trying to 'trap' unsuspecting men into 'settling down'. Bull. According to Dr. Fisher's survey only 12 percent of single men want to be single— meaning a whooping 88 percent of men are looking to get into a relationship.

6. If You're Single And Not Dating As Much As You'd Like — You're Not Alone

Bummed you haven't been on any dates recently? Don't worry, being single is certainly not like it is on Sex and The City. It's totally normal to not be going on dates every Friday night. According to chairman and co-founder of eHarmony, Neil Clark Warren, over half of single people haven't been on a date in two years.

7. You Can Be In Control— Make A Move

A lot of my female, heterosexual friends sort of wait for their love lives to happen to them. Whether it's waiting to meet someone in real life, or going through the trouble of joining a dating app and then refusing to message someone or ask them out first, they're just waiting for it. And waiting takes a whole lot more time than doing. Well, you know what, 90 percent of men that Dr. Fisher surveyed were A-OK with a woman asking them out —90 percent! And the other 10 percent are idiots, so you wouldn't be asking them out anyway. The whole dating thing is a lot less daunting if you know you can just go for what you want.

8. You Don't Have To Believe In Soulmates

Feeling like it's impossible to find the perfect person out there? Plenty of people think the idea of "The One"— that there is just one person out there for everyone, is total BS — and you can too. Why? Look how many fish there are in the sea! How can you be expected to find this one person? And, according to a University of Houston study, believing that there are many potential partners out there for you actually makes it easier to get over a relationship doesn’t work out with someone.

Well, a long time at least. If you're bummed about your single status, remember this: A 2005 study from Queensland universities found that divorced, widowed, and single women in old age were healthier than their married counterparts.

Truthfully, there will be ups and downs when you're single and dating, but this happens when you're in a relationship or married, too. Don't forget to take the time to enjoy being single, because it can be pretty awesome.