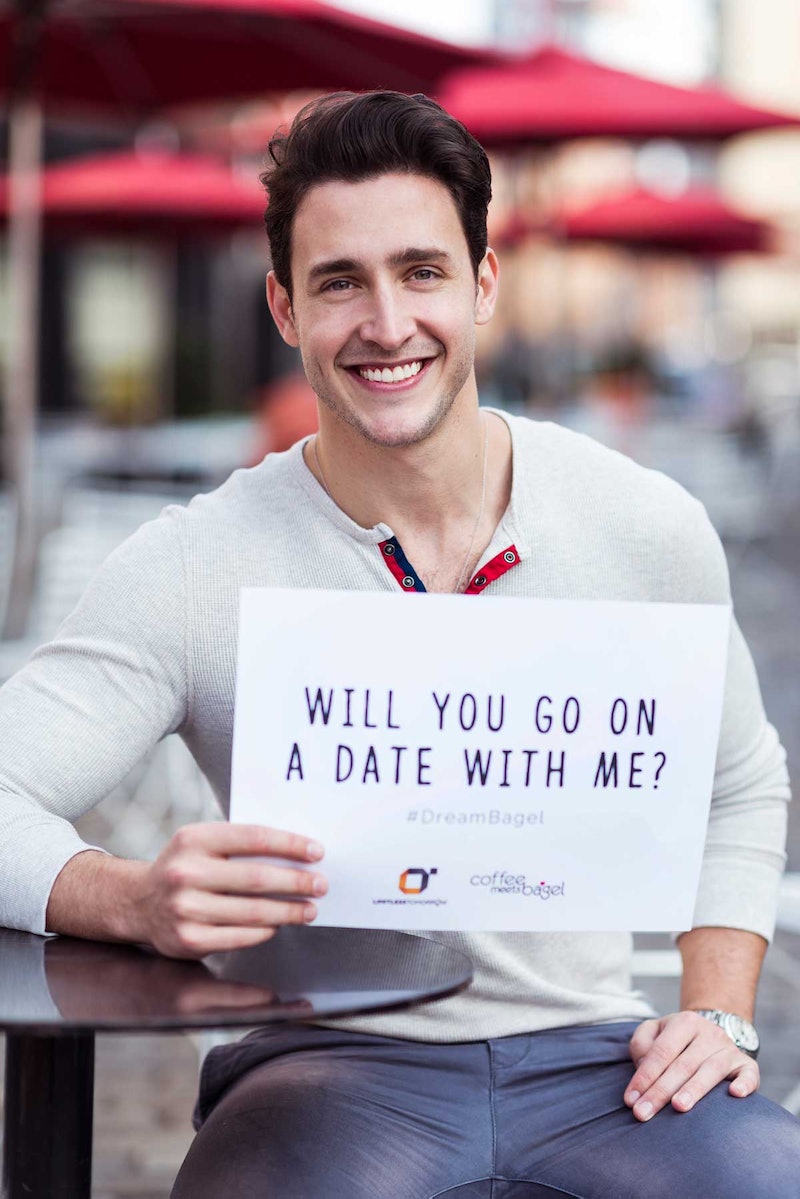 Starting Jan. 6, you can win a date with the person of your dreams — aka Dr. Mike, of the Hot Doctor Instagram and actress/model/author Julia Conley — and it's all for charity. Dating app Coffee Meets Bagel (CMB) is giving members the opportunity to win an all-expenses-paid date with Dr. Mike or Conley when they donate at least $10 to charities that the two celebrities chose. For every $10, participants will get 100 entries (!). Sounds great, right?

Though the details of the date will be a surprise, it’ll take place in NYC and, who are we kidding, NYC city is a-ma-zing. And if you don’t live there, NBD. CMB will pay for your flights. It’s a win-win for everyone.

CMB is a free app where you get one bagel, or match, a day at noon, so it’s not a sea of endless swiping. Once a day, you’re “introduced” to a friend of a friend and you can “like” or “pass” on them. Matches are based on attraction, geography, and common interests, and you only have 24 hours to decide if you “like” or “pass” on someone. If it’s a match, you’re connected and can chat, but you must within seven days or else the match disappears. (I think this is great; after all, none of us just want matches without messages!) CMB is responsible for more than one million (!) dates, resulting in about 20,000 relationships, 500 new couples each week, and over 200 marriages. Not bad!

“When CMB originally reached out, I was quite skeptical about the idea of auctioning off myself on the Internet,” Dr. Mike tells Bustle. “However, as I got to know more about the app and how it works, I quickly became a fan. The idea of helping my new foundation, Limitless Tomorrow, get its feet of the ground through such a positive means was captivating. I thought of no better way to make use of my label as ‘Sexiest Doctor Alive’ from People Magazine (still shocking) than to raise money for charity by partnering with CMB.”

Conley agrees. “I was really excited to get involved with Coffee Meets Bagel for this sweepstakes because of the charity aspect,” she tells Bustle. “Having a platform to be able to raise money for the Kering Foundation is really a great thing!”

“Dr. Mike and Julia were ideal choices for this philanthropic initiative,” said Dawoon Kang, co-founder of Coffee Meets Bagel said in a press release announcing the contest. “Their strong work ethic and kind, caring hearts make them beautiful both inside and out — a perfect fit with Coffee Meets Bagel’s values. We wanted our members to start 2016 with a chance to go on a great date and contribute to a great cause. In the end, all participants win.”

In case you don’t Instagram-stalk him like I — and the rest of the world — do, Dr. Mike has over one million followers and is often referred to as “the real-life McDreamy.” As Dr. Mike says above, People recently named the second-year medical resident the “Sexiest Doctor Alive.” And, let’s face it, who doesn’t want to date McDreamy?! Lately, he started a charity, Limitless Tomorrow Foundation. According to its Instagram page, the foundation’s goal is “Breaking the financial barrier to empower capable and unique individuals in order to achieve their goals.” They aim to give grants and financial aid based on the person, not only their grades. Awww, he's hot and helpful...

If Conley, who you probably saw in Not Another Celebrity Movie or All I Want For Christmas, is your dream gal, you'll be supporting The Kering Foundation, the charity she chose. It takes action against violence towards women and has helped over 140,000 women from the United States, Western Europe, Brazil, Argentina, and Asia over the last five years. She's another hot-and-helpful combination.

Bustle got the DL from Dr. Mike and Conley, and here’s some (extra) incentive (like you need it!) on why you should date them and things you should know going in.

“I have used a dating app or two…” Dr. Mike says. (Too bad he never came up on my searches, but I guess we were on different coasts!) “Yes, a few,” Conley tells us. If Dr. Mike and Conley are using dating apps, we all should. End of story.

2. And Here's What They Found

Those of us who have used mobile or online dating apps know that it’s efficient, but not always successful. (Or else why would we be entering contests like this or reading articles about it?!) But how have Dr. Mike and Conley done?

“I had a short-term successful relationship based off of online dating,” says Conley. “I have also made numerous friends as well.” I hear that. And Dr. Mike? “My past attempts at meeting dates through dating sites turned out to be disasters,” he says. “I've met people who were totally different than their pictures, and I mean TOTALLY different. I think the term ‘catfished’ would be appropriate to use. What I've found is that it is mandatory to do a video-chat session prior to meeting anybody in person.” Personally, I LOVE this idea. I am a big fan of the pre-date phone call, but Dr. Mike’s idea sounds even better.

According to a study by Statistic Brain, nearly EVERYONE has tried online dating — 49,250,000 of the 54,250,00 single people in the U.S. That’s a lottttttt. However, that doesn’t mean everyone likes it.

“I am an old-school soul, so I am a huge fan of meeting your significant other in person,” Dr. Mike tells Bustle. “However, with how much social media has shaped our lives, it is now nearly impossible to not meet somebody online. Being a doctor, I also have incredible time constraints, so online dating allows to me to continue to be social despite the few free hours I have during the day.” I’m sure we can all relate to that!

“I think mobile apps/online dating is a great way to meet people in this day and age,” Conley says. “You can meet people with the same goals and aspirations as you, which are just some of the things I look for when dating.”

"It is a wonderful way to try online dating without putting everything online for just anyone to find,” says Conley. I get that. “The daily recommendation is something to look forward to, and I love that they match people based on mutual attraction and same interests. For someone who's busy and doesn't have the time to scroll through profiles, having CMB do the work is a great solution.”

I like the friend-of-a-friend part of CMB, too. So does Dr. Mike. “This app is much more old-school than the rest of the dating sites I've used or heard of in the past because you're somehow connected to the person you're matched with,” Dr. Mike tells Bustle. “I don't feel like I'm using a dating website when I'm on CMB. I'm a huge fan of meeting spontaneously and in the age of mass-liking and scrolling CMB seems to bring back that special unique moment.”

Ah, the eternal question, right? What to write...?

“It would have to be something that I noticed looking through their pictures,” says Dr. Mike. “If you take the time to notice something special in someone's photos (clothing, pets, activities, etc.), it shows that you’re more genuinely interested in creating a connection.” Great tips again! Maybe he should be a dating doctor, not a medicine one?!

“I personally like to break the ice with a random this or that question, such as, ‘If you had to lose your arms or your legs what would you choose and why,’ says Conley. ‘This gives us something to talk about and avoids the whole, ‘Hi, I like your profile’ conversation that normally takes place.”

6. Here's How They Describe Themselves In Emoji

I barely send emojis until some kind of messaging rapport’s been established, but then, game on! I know people love them more than ever lately, and Dr. Mike and Conley are no exception.

Conley says she would use a princess, peace sign, and surfing emoji.

“NERD emoji for sure,” says Dr. Mike. “But I also think the crazy emoji with the wink and tongue sticking out also represents my fun side pretty well.”

7. Their Recipe For The Perfect Date

“My perfect first date would involve two aspects, amazing food and a fun or unusual activity,” Dr. Mike tells Bustle. “I love taking my date to something she has never tried before, like boxing or rock-climbing. Anything that creates an adrenaline rush also releases dopamine, a feel-good neurotransmitter, leading to a deeper connection. Sorry, there’s that nerd again =].” (Or med student!)

Conley agrees. “I have no great expectations for a first date,” she says. “I just would like a fun, adventurous, and memorable experience.”

The links to donate (and possibly win a date with one of them!) are: