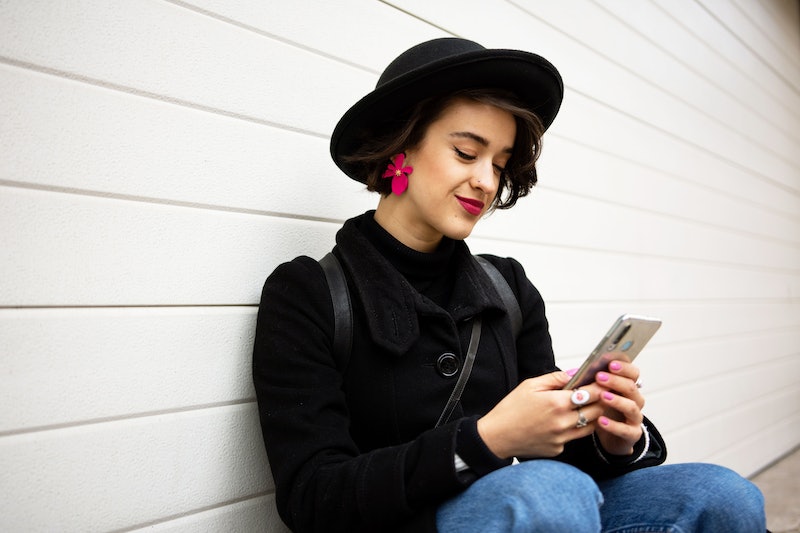 I think it's time for a bit of a dating rules revolution, because despite the fact that the rule of men asking women being old-fashioned, women still do not seem to be asking men out. So how do you ask a guy out over text? Despite the fact that 95 percent of men think a woman asking them out is "hot," I feel like I don't see it happening that often among my friends. Instead, a lot of my friends are sitting around waiting for people to come to them. And they're missing out on things they want.

So, why isn't it happening more? Probably because, no matter who you are, asking someone out can be awkward. So, so awkward. It's also really brave. You could end up with a "no" and feel embarrassed. But you know what? If that's the worst that could happen, you'll get over it. In like two seconds. Because, especially if it's someone you're talking to on an app or just meet randomly, that person has literally 0 percent impact on your life. None.

I had to develop the nerve to ask people out. Mostly because, well, I just didn't get asked out a lot. It just didn't happen. Yeah, it's kind of annoying, but it's not the worst thing in the world and because of it I learned to be way braver. And once you do it a few times, it's really not that big of a deal. I promise.

So here are some suggestions to get you started. (Warning: they may sound cheesy. Asking someone out may feel like it's beyond your comfort zone, and that's OK, you have to get on board.)

1. We've Been Talking, So Let's Just Do This

OK, I'm starting with something extra-bold and we can get easier from there. Sometimes if you've just been chatting for a long time, you need to break out of the conversation and just go for it.

I went out with a guy from Hinge because he spontaneously suggested something that night and I happened to be free and liked his chutzpah. It also feels like there's less pressure when you ask someone out this way — yes, you're putting yourself out there, but because it's last minute there are no hard feelings if it doesn't work out. Then, the ball can be in their court for next time.

2. Something In Common, Let's Go

If you find something in common — literally anything — capitalize on that. You studied the same thing, have the same hobby, want to see the same film — just go for it!

It's often tempting to wait for the perfect moment when you're talking to someone — you think that there will be some obvious cue, everything will click, and you'll be able to ask them out. But sometimes, you have to make your own luck — and your own timing. So jump on commonalities when you find them.

If you want the most basic of all the basics, this is it. Just ask them out for a drink. Yeah, it's not catchy or witty, but also you know no one is going to be surprised or weirded out by it.

It's good to remember that the person you're chatting to (most likely) expects this to be leading to meeting up in real life. It's not going to take them totally by surprise — you are chatting to a potential romantic interest, after all. And asking someone out for a drink is about as straightforward as you can get. It is 100 percent the expected thing for someone to say in this situation, so it's the safest bet.

4. I'm Just Jumping In (With Something Low Pressure)

If a drink seems too intimidating right off the bat, that's OK. Suggesting a coffee is a great way to ease yourself in. It's similar to going out for a drink, but even less pressure — because it's easier to get away from if it's not going well. You can spend less time and have it come to a natural end.

It also feels less intimidating to be asked out for a coffee than a drink — so if the person you're talking to is also a little shy, it may be a welcome invitation. As someone who has trouble saying no and has spent four hours on a date I didn't want to be on, sometimes sticking to coffee is best.

Hey, sometimes you don't want to go on a date. Sometimes you just want a hookup. I'm not a fan of having someone you don't know come to your house — I like a public setting first. But if you've gone out with them or done whatever makes you feel comfortable and then you decide you want to get laid, a binge-watching marathon is basically code for the horizontal mambo (which is awkward nerd code for hooking up).

Of course, don't suggest a show that you actually want to watch and pay attention to, because you may end up resenting the distraction. Better stick with something that is totally OK in the background.

Maybe you don't have anything in common so far, but they seem like they'd be good conversation and you want to meet up. Jump on something they've said and suggest you do it together.

Yeah it's a little cheesy, but it gets things moving. Pretty much everyone is in agreement that moving from texting to actually dating is awkward, so they won't judge you harshly if it feels a little forced. They'll probably just be grateful you're doing some of the heavy lifting for them.

Fun fact about asking people out: You may do it more than once. If you've had a good time on the first date and think they did too, suggest seeing each other again. Not 100 percent sure if they want to go for a second date? Well, they're probably wondering the same thing about you. So be brave and put it out there.

Reference any silly, fun things from the first date and just say it. I mean, you've met them once, if they say no then it's really not a big deal. I've had maybe a billion people say no to me. It happens to everyone who puts themselves out there.

But it's better to put yourself out there and get a pie in your face once and a while— because you'll get a lot of fun stuff along with the occasional pie. Plus, even if they say no you can be proud and self-assured that you tried.