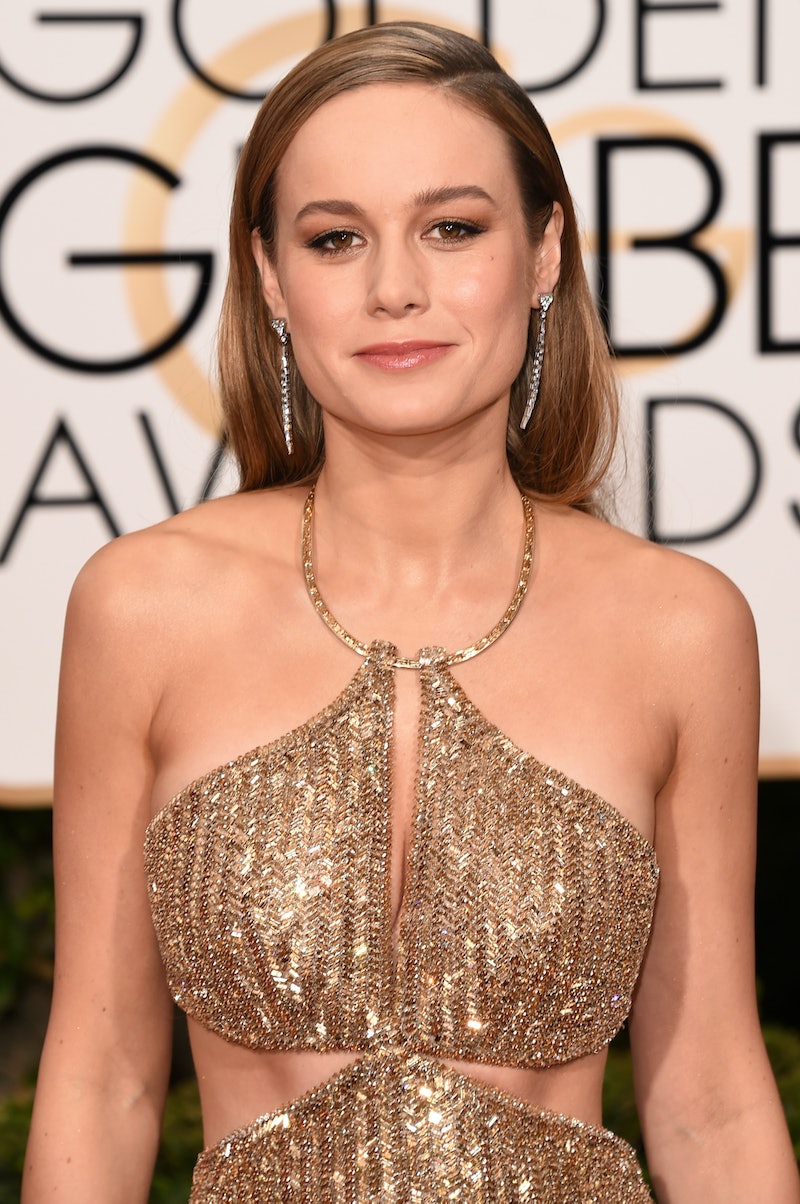 With just one day to go before the nominees for the 88th Academy Awards are announced, those fans who are making their final predictions for the 2016 Oscar nominees are working overtime to make sure their ballots are iron clad. They're reading sites like Vulture, Variety and The Hollywood Reporter to see who their best bets are in these final hours. They're double-checking the winners list for the 2016 Golden Globes too, in hopes of gaining an edge. But there is an even easier way to predict the Oscar nominees list, and see if yours will line up with the Academy. And I'm not just talking about this year, but every year.

See, the Academy is filled with people who bring stories to life everyday, so it's no surprise that, when it comes to their nominees, they also want them to tell a certain kind of narrative. They tend to stick with certain touchstones that make it a little easier to decide on whose name will likely be called on nominations day. It's almost like they're not just looking for Best Actor or Actress; they're looking to check off a few other sub-categories, like "The Ingenue" or "The Child Actor." These add to the stories and make us feel connected to these performers.

Don't believe me? Just look at a bit of Oscars history, and you'll notice there are just some things the Academy can't help but include on their nominations list.

When it comes to the female acting categories, there is usually a young woman who is new on the scene and who will be the talk of the town hours after the nominations are announced. Often, her performance is heartbreaking. Think 12 Years of Slave's Lupita Nyong'o, who won the Best Supporting Actress statue in 2013 on her very first feature film. Or, Angelina Jolie, who won the same prize in 1999 for playing a sociopath in Girl, Interrupted when she was just 24 years old.

Other times, this woman has been the runaway favorite all year, earning critical praise and the love of her audience for not only her performance, but also her personality. She's probably also managed to become a style icon and magazine cover fixture in just 12 months. This would be Jennifer Lawrence in 2013, when she earned her second consecutive Best Actress nomination for Silver Linings Playbook. Her win would make her the biggest star on the planet, and, now, she's a veteran of the awards show with three nominations and one win in the last four years — with a likely chance for another nom this year thanks to Joy. It's easy to forget that she's still just 25 years old.

The 2016 Nominee? Brie Larson and Alicia Vikander would definitely both fit the bill. The 26-year-old Larson has been earning rave reviews for her performances for a while now (see: Short Term 12 ), but it's her role in Room as a young mother, who is kidnapped and trying to escape with her young son, that has Oscar voters talking. Plus, people seem to have a soft spot for her sweet attitude, which was on full display at the Golden Globes, where she won for Best Actress and said she was going to write anyone she forgot to thank a thank you note later on. She seems like just the type who would do it, too. Right now, Larson's the one to beat when it comes to Best Actress.

Vikander, on the other hand, is new on the scene, earning raves for two different films she was in: The Danish Girl and Ex Machina. Along with earning a whole lot of Best Dressed accolades on all of the red carpets she's been on, she also earned herself a Vogue cover to signal her fashion arrival. At this point, it's not whether Vikander will be nominated for Best Supporting Actress; it's about what movie they'll end up choosing.

Age is nothing but a number in the acting game, but it's one the Academy loves to highlight. They get giddy when they can talk about an older star who is only just now getting a first taste of Oscar. They get even more excited when its oldest nominee falls in the same category as their youngest; this way they can keep talking about just how big of an age difference there is between them. You may remember this happening in 2012, when 85-year-old Amour actress Emmanuelle Riva (the oldest ever Best Actress nominee) went up against 9-year-old Beasts of the Southern Wild star Quvenzhané Wallis (the youngest ever Best Actress nominee.)

The oldest Best Actress winner was Jessica Tandy, who was 80 years old in 1989 when she won for Driving Miss Daisy. Though she had been acting since 1932, it was her first nomination. The oldest actress ever to be a first-time nominee for Best Supporting Actress was Gloria Stuart, who was 87 years old when she earned a nod for Titanic in 1997. (She lost to Kim Basinger for L.A. Confidential, who was 43 years her junior.) The oldest winner of that same prize was 77-year-old Peggy Ashcroft for A Passage To India in 1984. It was her first and only nomination before her passing in 1991.

While the record-holding oldest female actresses and supporting actresses were all first timers, the same cannot always been said of their male counterparts, who often repeat nominees when they earn their oldest nomination. However, there have been some notable elderly first timers like Hal Holbrook, who was 82 when he was nominated for Into The Wild in 2008, or Max Von Sydow, who was also 82 in 2012 when he was nominated for Extremely Loud and Incredibly Close. George Burns was 80 years old when he won Best Supporting Actor for The Sunshine Boys in 1975, and, for 36 years, he was the oldest winner of that prize. When nominated for the supporting role, these experienced first timers have a better chance of winning than those who fall into the lead category. But, either way, it's always an honor just to be nominated.

The 2016 Nominee? Charlotte Rampling in 45 Years. This would be the very first nomination for the English actress, who will turn 70 before the ceremony. She has been working for nearly 50 years, appearing in films like Woody Allen's Stardust Memories and 2003's Swimming Pool.

The ingenue may be young, but the child actor well... is a child. Nearly every year, there is someone way under the voting age who is nominated in the acting categories. Sometimes, they even manage to win. Like Tatum O'Neal, who was just 10 years old when she won Best Supporting Actress for Paper Moon in 1974. Or Anna Paquin, who was 11 years old when she won the same award for The Piano in 1994.

Other actors who were under 13 when they had a taste of Oscar, but did not win, include two Best Supporting Actor nominees, both 11 at the time: The Sixth Sense's Hayley Joel Osment in 2000 and Brandon deWilde for Shane in 1943. Meanwhile, three Best Supporting Actress nominees all happened to be 10 when they were put on the ballot: To Kill A Mockingbird's Mary Badham in 1963, The Goodbye Girl's Quinn Cummings in 1977 and Little Miss Sunshine's Abigail Breslin in 2006.

The 2016 Nominee? Room's 9-year-old Jacob Tremblay for Best Supporting Actor. The tiny Canadian actor has been in only one other feature film (Smurfs 2), before appearing in this movie that has him going through quite a lot. His ability to play a young boy who has never been outside could add him to that select list of 9-year-old Oscar nominees.

There's always someone who is nominated that makes you think to yourself, "It's about time they won this award." Mainly because they've been a staple in film, so it's almost unbelievable that they've never won. They may have a lot of nominations under their belt, or they may have been overlooked time and time again. Either way, this is the year that it feels like they just need to win, according to the fans. A good example was Martin Scorsese, who is the most nominated director with eight Best Director nominations, but didn't manage to win until 2006 with The Departed.

Sometimes it takes awhile, as Al Pacino and Geraldine Page well know — both were nominated eight times before they won. Kate Winslet was also someone people knew had to win some day, but, after receiving five nominations without a win, seemed like she may be the Susan Lucci of the Oscars. Then, on her sixth try in 2009, Winslet finally won for Best Actress in The Reader. Six was also the lucky number for Paul Newman, who won in 1986 for The Color of Money.

Sometimes these nominees do lose though, which is rather heartbreaking. Peter O'Toole, who passed away in 2013, was nominated eight times and never won. Poor composer Victor Young was nominated 21 times without winning. Amy Adams has been nominated five times without a win. Michael Keaton was the It's-About-Time nominee last year, making his great return with Birdman, which earned him his first nomination. But the man who had played Beetlejuice, Batman, and Mr. Mom just couldn't compete with Eddie Redmayne's portrayal of Stephen Hawking.

The 2016 Nominee? Leonardo DiCaprio in The Revenant. He's been nominated four times for roles that could have been Oscar winners, and snubbed for even more. But since Leo fought a bear for this one, it seems like it's finally his year. Seriously, just make the world happy and give it to him already.

If she's in anything — and seriously anything — she will likely be on the short list of actresses who are nominated. Over the span of her nearly 40year career, she's been nominated more than any other person with 19 nominations. That's 15 for Best Actress, and four for Best Supporting Actress. That's also eight more nominations than Katharine Hepburn and Jack Nicholson, who are tied for second for most nominations. Streep's won three times: Best Supporting in 1979 for Kramer vs. Kramer, Best Actress in 1982 for Sophie's Choice, and Best Actress again in 2011 for The Iron Lady.

The 2016 Nominee? Meryl Streep in Rick and the Flash. Sure, it's unlikely that she'll be nominated for playing the aging rocker, but you never know. This is Meryl Streep. She can do no wrong, no matter how good or bad the movie is.

Not all of these Oscar sub-categories will make the 2016 list of nominees, but, based on past lists, I bet you'll see a few of these touchstones on there. The difference now being you won't even bat an eye when you discover them.

More like this
Remember When Benedict Cumberbatch Announced His Engagement In A Newspaper Ad?
By Hugh McIntyre
Tom Cruise Gives His Honest Review Of Lady Gaga’s New Song For 'Top Gun: Maverick'
By Hugh McIntyre
Regina King Puts Her Career, Family, & Friends Before Romance
By Jake Viswanath
Sandra Bullock, Girlboss Extraordinaire
By Matt Harkins & Viviana Olen
Get Even More From Bustle — Sign Up For The Newsletter