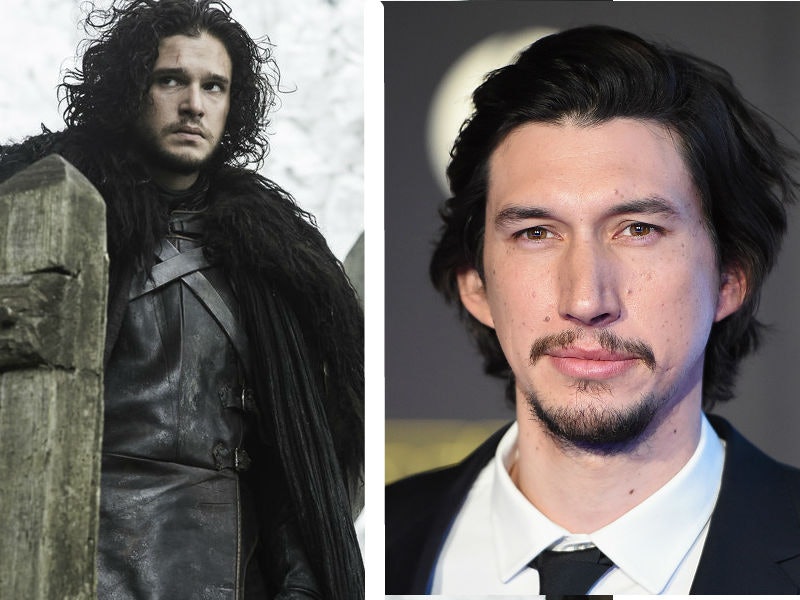 In the world of fantasy hair, one hairdo has emerged in recent years as the one 'do to rule them all: Jon Snow's. Everybody's favorite member of the Night's Watch has captured Game of Thrones fans with his luxurious mane of curls and brooding stare. As played by Kit Harington, Snow has become iconic both as a character and as hair goals. Since Game of Thrones debuted on HBO in 2011, Jon Snow's hair has been the talk of the town, but now, almost five years later, it seems he might be getting some competition in the fabulous locks department — and that competition has the Force on his side. Yes, the man with the mane glorious enough to rival that of Snow is none other than Kylo Ren, the new villain introduced in Star Wars: The Force Awakens . Though Ren, played by Adam Driver, spends most of his screen time hidden underneath a helmet, his rare non-helmeted appearances reveal the most beautiful head of hair ever to grace the Star Wars universe, raising the question: who has better hair, Jon Snow or Kylo Ren?

Both Kylo Ren and Jon Snow have inspired countless memes, twitter accounts and fan art with their luxurious hair, and there's no doubt that there is room enough in the galaxy for both beautiful men to let their hair down. However, determining the Luxurious Hair Champion is something that needs to be done. Sorry guys! Alright, so, first things first, let's establish the similarities between Kylo Ren and Jon Snow (assuming Jon is alive, of course). Yes, they both have exquisite dark hair that tumbles down to their shoulders, but they have more in common than just that. For instance, they both have daddy issues and are isolated from their families. They both live in cold climates, allowing for snowflakes to make a home in their perfect hair. And, finally, they are both broody hunks who, let's be real, know nothing. Oh, and they also both love black because they have emotions.

All of these factors make Jon Snow and Kylo Ren equal in the eyes of lovableness. So, to determine who has the most luxurious hair, you must ask yourself three questions.

1) Whose Hair Is Most Expressive In Volume?

Jon Snow's curly hair is, unquestionably, voluminous to the extreme, but is it expressive? Yes, his curls flying through the wind and snow paint a pretty picture — and make him look like a cute, lost puppy — but does it add character? In other words, would you still think of Jon Snow the same way if he did not have his hair? I would have to say yes. Maybe it's because Jon has had more time to become a fleshed out character, or because his face is just so darn pouty, but it seems to me that we would still love and care for him without the hair getting in his face. Cut his hair, and he'd still be Jon Snow. Kylo Ren, on the other hand, is so rarely seen without his mask, that imagining him without his hair is impossible. It's part of what makes the reveal so great. The moment Ren finally takes off his mask, the last thing you expect to see is this gorgeous hair. And that contradiction makes him immediately interesting no matter what you think of him.

2) Whose Hair Would You Rather Run Your Fingers Through?

This is definitely a matter of preference, but here's my take: Jon Snow has super curly hair. Now, it's not that I'm not into curly hair, because, I mean, have you looked at Jon Snow? But, if a man cares about his hair — which it looks like both Jon Snow and Kylo Ren do — then a man with curly hair might not appreciate constant petting and finger combing, no matter how romantic. Curly hair can get some unwanted frizz from being messed with too much, and a frizzy Jon Snow is not a happy Jon Snow. In fact, I'd bet that a frizzy Jon Snow is a miserable Jon Snow (even more miserable, that is). Kylo Ren's hair, on the other hand, looks pretty straight, perfect for a little petting.

3) Who Has The Best-Smelling Hair?

Fragrance is a tricky thing, but it is important. If you're gonna pick a winner for best hair, it better smell good. But, if we're being honest, it's likely that neither Jon Snow nor Kylo Ren smell that great. Snow, for one, is constantly sword fighting in the snow and getting all dirty, which is super hot in theory, but probably super gross in reality. Ren is also always sword fighting, but, more importantly, he spends his life underneath that helmet. I'm guessing it gets pretty sweaty up in there. Not a good look. Simply by that logic, I'm gonna give this one to Jon Snow.

Well, there you have it. Kylo Ren has officially beaten out Jon Snow. I hereby declare Kylo Ren has the most luxurious hair in the galaxy. Thus, like Miss Colombia, Jon Snow is now the first runner up. But, don't get too sad, Snow! Things are looking up for you in Season 6 of Game of Thrones — you might even be alive. When your life is on the line, does your hair really matter that much?