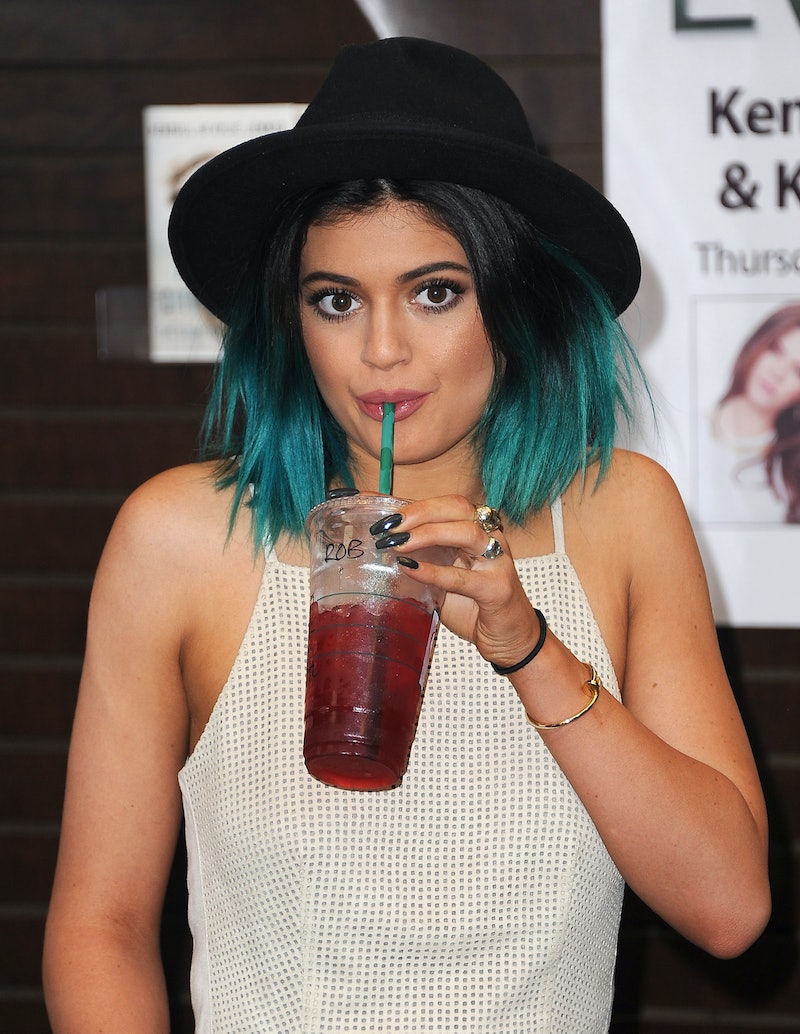 Well played, Kylie Jenner, well played. Kylie Jenner teased new Kylie Lip Kit colors. But the reality star did so with a black and white photo, thus obscuring the actual colors. Foiled! However, we can glean plenty of context from the depth of the shades, even with a colorless filter. See those really dark swatches on her arm? Those could be anything — rich red, a deep burgundy, or even black. Duh. But there's another source from which we can speculate.

We can use our makeup-lovin' wiles and look back at Jenner's extreme lip looks of yore for clues about the potential new colors. Will she revisit her past with her new set of Lip Kit shades? Will she go beyond the brown, pink, and nude neutrals of the current offerings?

Perhaps! Jenner has played with black, matte, and gothy lips before. She has also rocked a bloody scarlet hue. Believe it or not, she's even tried a super soft pink.

Jenner painted her arm with a dozen swatches of colors as she tested them. Granted, not all the test colors will make it to a tube and eventually to your or her lips. Also, we can't tell how many true variants are here. There may be multiple swipes of the same color, thus making a shade look more concentrated through built coverage.

Here are the swipes of new "colors." It looks like some sort of lost language, thanks to the position and thickness of the lines!

So all we really can do is look to her past to see if there is some inspo or hopeful hints there.

If you recall, prior to the Lip Kits launch, Jenner teased the test samples, which suggested she would rock pink and brown neutrals, which she did for the first run. I call it "Kylie Season 1," in honor of her brother-in-law's Yeezy Season 1. Maybe one of the OG sample shades will make the cut for Kylie Season 2?

Jenner doesn't do reds very often. But this maroon-y red was definitely a statement shade that would translate beautifully in KLK form. Perhaps she was test-driving —literally!— a potential shade? I mean, why would she wear another brand's lipsticks when she can test and tease her own without saying a word?

Will she take Kylie Lip Kits into edgy territory, like with a similar, teal-tinted black?

She was rocking a deep, black-painted pout for a few minutes in 2014. I could totally see a KLK in black being huge around Halloween and among the goth set.

How about this peachy nude? It's universal and could appeal to all of her fans and followers.

A melon-y pink shade such as this would look great in KLK's signature suede-like texture.

So there you have it. Perhaps Jenner's past lip looks will give rise to her next run of Lip Kits. Let's just hope she stocks enough to supply to meet demand or the Internet might break... again.

More like this
12 Bellissima Beauty Moments From Milan Fashion Week S/S 2023
By Olivia Rose Ferreiro
Early 2000s-Era Rhinestone Tattoos Are Back, Baby
By Jordan Murray
The 10 Best Emmys 2022 Makeup Looks
By Paris Giles
Camila Cabello Slayed The Face Gem Trend At Rock In Rio 2022
By Olivia Rose Ferreiro
Get Even More From Bustle — Sign Up For The Newsletter