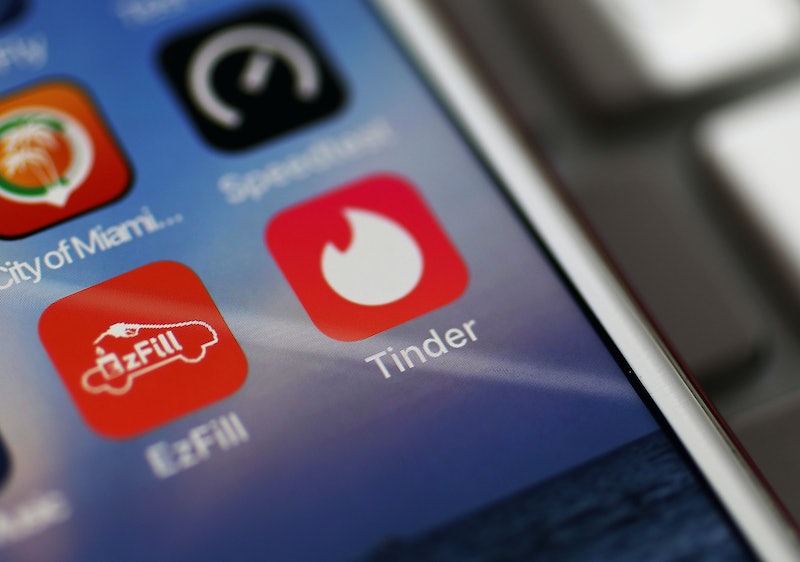 Moore, a comedian, humor writer, and sex and relationships editor at Cosmopolitan.com, tells Bustle over email that she started her Tumblr to call out guys who wave around their "feminist" labels to elevate their status in the dating market. She explains:

I kept seeing all these guys with profiles saying they were feminists in big bold letters with exclamation points or making these weird intense statements about how they were obsessed with women’s issues, which is cool, but it's weird for the main fact about your Tinder to be "I DON'T HATE WOMEN."

It's an odd world we live in: While many people are afraid to call themselves feminists thanks to unsavory stereotypes, some are all too eager to embrace the term if they think it'll win them favor. And as people who end up on dates with these "feminists" can tell you, their actions often contradict their stated belief in gender equality. I myself once went on a date with a "male feminist" from Tinder who said rape culture doesn't exist and men are as disadvantaged as women because they have to make the first move.

Scrolling through Moore's blog, I was surprised to find I'd actually seen a few of these guys on dating sites before. It looks like the male feminists of Tinder are really making their rounds throughout the Internet.

This "weekend warrior," for example, matched with me and then didn't respond when I said "I'm a feminist too":

While the word "feminist" really did only make my Tinder profile a troll magnet, Tinder's male feminists usually get brownie points for it. We've got male privilege to thank for that.

This fan of "women who make the first move" and "mean jokes" sounded familiar to me as well — because, it turns out, he's also touting his feminism on OKCupid, where he charms so many users with this list of qualities he doesn't want in a partner that his inbox is too full to receive messages:

You can view more of online dating's women's rights champions on "Male Feminists Of Tinder" or Lane Moore's Twitter, but don't say I didn't warn you. And if you end up on a date with one of these fellows, their feminism may be a great asset, but just remember: Actions speak louder than words. Especially when those words caption a photo of someone humping a yoga mat.

More like this
Why A Libra & Capricorn Couple Will Have A Difficult DTR Conversation
By Kristine Fellizar
Are Quality Time & Gift-Receiving Love Languages Compatible?
By Lexi Inks
The Differences Between Polyamory & Open Relationships
By Lexi Inks
Are Libra & Scorpio Compatible In A Relationship?
By Kristine Fellizar
Get Even More From Bustle — Sign Up For The Newsletter