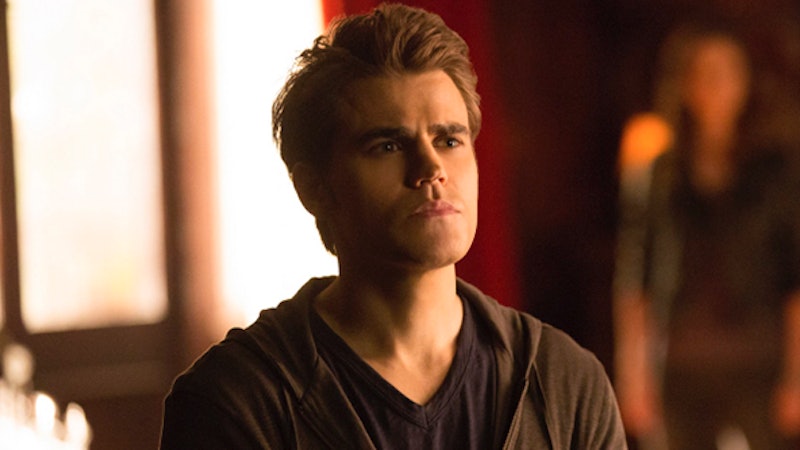 The citizens of Mystic Falls and New Orleans will collide once more in a The Vampire Diaries and The Originals crossover this season. With both shows migrating to Friday nights, it only makes sense for The CW to stage a two-episode event, and it appears that it's actually going to happen. CW executive Mark Pedowitz broke the news at the TCAs over the weekend, although he kept details on what the crossover would entail mum. According to Deadline, the only tidbits he would share is that it would be "an organic" crossover, but it would not be a massive crossover on the scale what Arrow and The Flash pull off. However, Entertainment Weekly was able to get some juicy scoop from both shows' executive producer, Julie Plec.

Here's what's known: Plec revealed that an on-the-run Stefan will seek safe haven in New Orleans where he will reunite with Klaus. "It’s a nice two-episode set of Vampire Diaries-Originals cohabitation," Plec said. "It’s going to be good. I’m excited about it." Does that mean any other Mystic Falls residents will be along for the ride? Personally, I would love to see a brief Klaus and Caroline reunion, especially since Klaus can offer Caroline advice on being a vampire parent, but if anyone is riding shotgun with Stefan, it will probably be his first love Valerie.

Any crossover between these vampire sister shows is good news for fans, though. Since the Mikaelsons were spun off on The Originals, their interactions with their former frenemies in Mystic Falls have been limited. The last crossover episode was in Season 2 of The Originals and it was basically just a big flashback episode for Petrova doppelgänger Tatia.

Having a major character of Stefan's caliber seeking safety under Klaus' roof is a huge deal. It could potentially even bring the mysterious vampire hunter who is laying waste to the Salvatores and their friends in the future to Klaus' neighborhood, and he definitely wouldn't like that. More importantly, this is a crossover with emotional stakes.

Remember, Klaus and Stefan were surrogate brothers for a time, but they left their relationship on less than stellar terms. In fact, the last time they saw each other, their love/hate relationship was still pretty firmly in the hate camp. Now that Stefan is in a position where he might need Klaus' help and protection, these vampire bros have a chance to repair their friendship. They have both matured a lot since their last encounter, so maybe there's hope.

My personal hope is that somehow Damon finds his way to New Orleans as well, because Damon in New Orleans would be the best possible Damon. Even with this whole vampire hunters tracking them down thing, I suspect he would take advantage of his time in the Big Easy. Plus, Damon has a special gift for injecting levity into the most dire of situations.

There is no word yet on when the two episode crossover event will air, but you might as well go ahead and clear your Friday nights for the next couple of months. You don't want to miss your date with Stefan and Klaus, do you? It's sure to be a bloody awesome reunion.