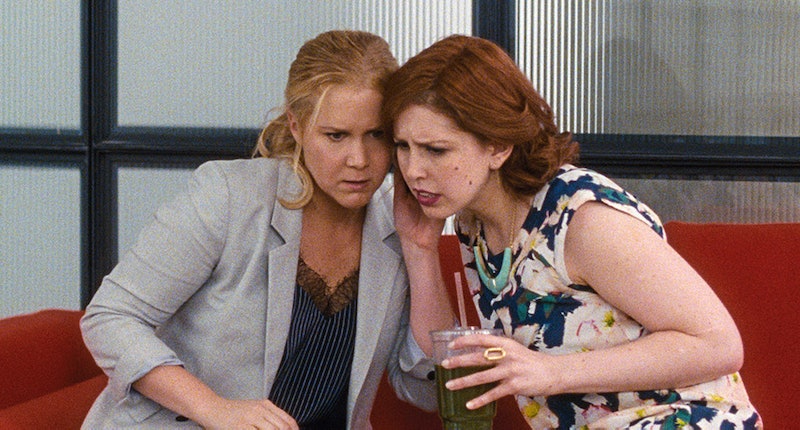 One thing that sets the Golden Globes apart from the Oscars in a great way is its use of two separate movie categories, one for drama, and one for musical or comedy. This lets great comedies that the Academy Awards might overlook get the awards recognition they deserve. This year, the most exciting example of that was Trainwreck receiving a Golden Globe nomination, highlighting Amy Schumer's hilarious, sex-positive, feminist romantic comedy. Unfortunately, a nomination was the only honor the film received, as Trainwreck was snubbed by the Golden Globes, with The Martian taking home the Best Motion Picture, Musical or Comedy trophy.

Undoubtedly, Trainwreck deserved to win. Every single one of its jokes land, each performance is excellent — from Amy Schumer's alternatively hilarious and heartbreaking moments to John Cena's unforgettable sex scene — and it tells a relatable story that goes far beyond romance, incorporating familial tension, professional struggles, and so much more. Beyond those merits, the snub is especially disappointing when you realize that with fellow female-centric comedies Joy and Spy nominated, the male-lead (and directed, and written) The Martian prevailed. In addition to starring in Trainwreck, Schumer wrote the screenplay, and it would've been a huge victory to see a female-written, thoroughly feminist romantic comedy receive a Golden Globe. And at the end of the day, this is the comedy category, and I'm pretty sure Trainwreck delivered way more laughs than The Martian.

But hey, maybe we shouldn't count out the Oscars yet. The Academy could always prove me wrong and give Trainwreck a highly deserved Best Picture nod for its modern take on a genre that is all too often overlooked, that just so happens to put a woman at its center.