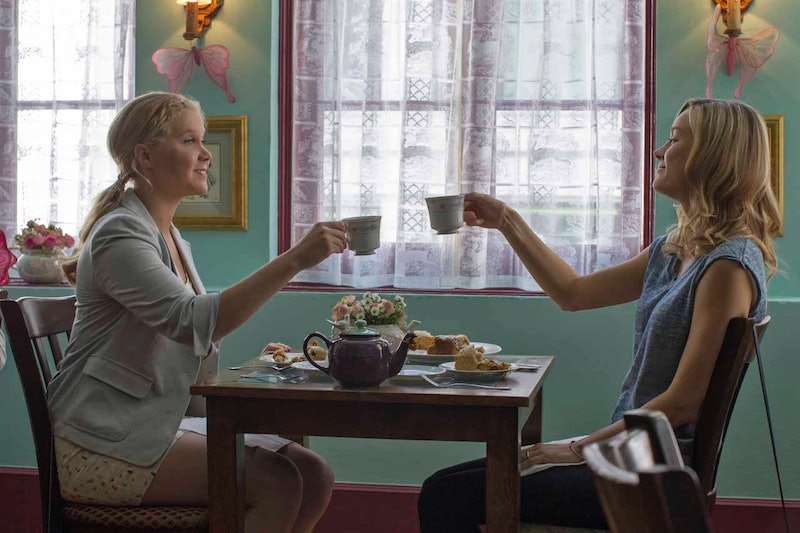 With only a few days left until the 2016 Golden Globes announce their winners, everyone's giving their predictions. And who wins this year may just lead to some change in the years to come. If Amy Schumer takes home the statue for her performance in her debut film, Trainwreck, we may see the Globes and other awards shows acknowledge the power of a good comedy. Specifically, one that focuses on a female character who is bold, honest, and as the title acknowledges, a bit of a mess. And even better, a female character who enjoys sex, but isn't that interested in falling in love. Or so she thinks. This is why Schumer's win could be good for romantic comedies.

The rom-com genre doesn't get a lot of awards show love, mostly because many think of it as consisting of clichéd, feel-good movies that choose style over substance. As long as the girl gets the guy, all is well. It's something Schumer proved didn't have to be true with Trainwreck, creating a version of the genre that kept some of the classic touchstones while not adhering rigidly to its formula. In other words, she flipped the script and gave us something that was not only funny, but also feminist. It's an entirely female movie that deserves to be recognized for how it changed things. As Bustle pointed out last year, Trainwreck is the rom-com we needed to prove the genre isn't dead; it just needed a feminist re-tooling.

Female-focused movies like Trainwreck don't often get to be in awards discussions, but when they are, it's assumed it will bring great change. When Bridesmaids was nominated at the 2012 Golden Globes, there were rumblings that a win in one of the two categories it was nominated in would change things for the better. While the Oscars have an aversion to laugh-out-loud comedies that do well critically and at the box office, the Golden Globes have a history of nominating raunchy comedies, considering them more than box office hits, worthy of the accolades their dramatic counterparts always get. They did award The Hangover Best Comedy/Musical in 2009, after all.

But nominating a woman-centered raunchy comedy that, at its heart, was also a rom-com seems like a huge leap forward. Most female-driven films that have been nominated in the comedy category are either a little hokey (Mamma Mia!) or lighter dramas that had snuck into the category because the drama one was a little too crowded (Joy). At the time, it was said that if the film won Best Comedy/Musical and/or Kristen Wiig won for Best Comedy/Musical Actress, it would show how seriously voters take women in comedy. (Though if they were really serious, they would have nominated Melissa McCarthy for her hilarious sink scene.) But still, it was assumed a win in either category would be a victory for funny women in film — one that would force not just the Golden Globes but also the Oscars to start seriously considering them worthy of Best Picture noms.

But the movie didn't win (The Artist did, and would later win that year's Oscar), and neither did Wiig (Michelle Williams won for My Week with Marilyn, which is neither a comedy or a musical), and that discussion soon fell away. And since then, female-led comedies haven't gotten a lot of love in the category.

This year, though, Schumer has a far better chance of actually taking home the Best Actress prize, beating out her bestie Jennifer Lawrence in the process. Even betting site Gold Derby has Schumer edging out Lawrence for the win. Not that she would mind; Lawrence has already been predicting a Schumer win, telling Seth Meyers, "Her performance was the year. She was the year. She drew the map, she wrote it out, she put herself on it, and then she showed us the map … That’s who I would vote for.”

Trainwreck is the most talked-about comedy of the year, and features the most talked-about actress of the year. In the most feminist year of entertainment yet, Schumer was as feminist as they come. Remember, she already won an Emmy for her show Inside Amy Schumer, on which she combated sexism with, among other things, a clever send-up of the classic film 12 Angry Men (in which 12 men debated whether she was hot enough to be on television). This will likely not go unnoticed by the Hollywood Foreign Press, who seem to pride themselves on having the hip awards show. Heck, they allow drinking during the ceremony.

A Schumer win is good for female comedy, and for anyone who likes romantic comedies. Trainwreck is a rom-com, but it's also much deeper than people expect from that genre. Which is a little sexist — really, any movie that is both funny and romantic is by simple definition a "romantic comedy." So yes, Woody Allen's Annie Hall is a rom-com. And it's considered one of the 100 best films of all time by the American Film Institute. That's the kind of love Trainwreck should be getting for going against the common tropes of the genre and making something completely new.

This is a movie about love — not just romantic love, but also that between sisters, as well as between fathers and daughters. It looks at death and how we cope with it. It looks at the workplace and how different it is for women. It shows how relationship hangups are often more serious than we'd like to believe. It may have a happily ever after ending, but Trainwreck is not fairy tale. It's an honest look at a woman trying to put her life together. These are the topics award-winning movies cover — they just usually do it in a dramatic form. A win for Trainwreck would show the films that should be taken seriously don't always have to be serious films.