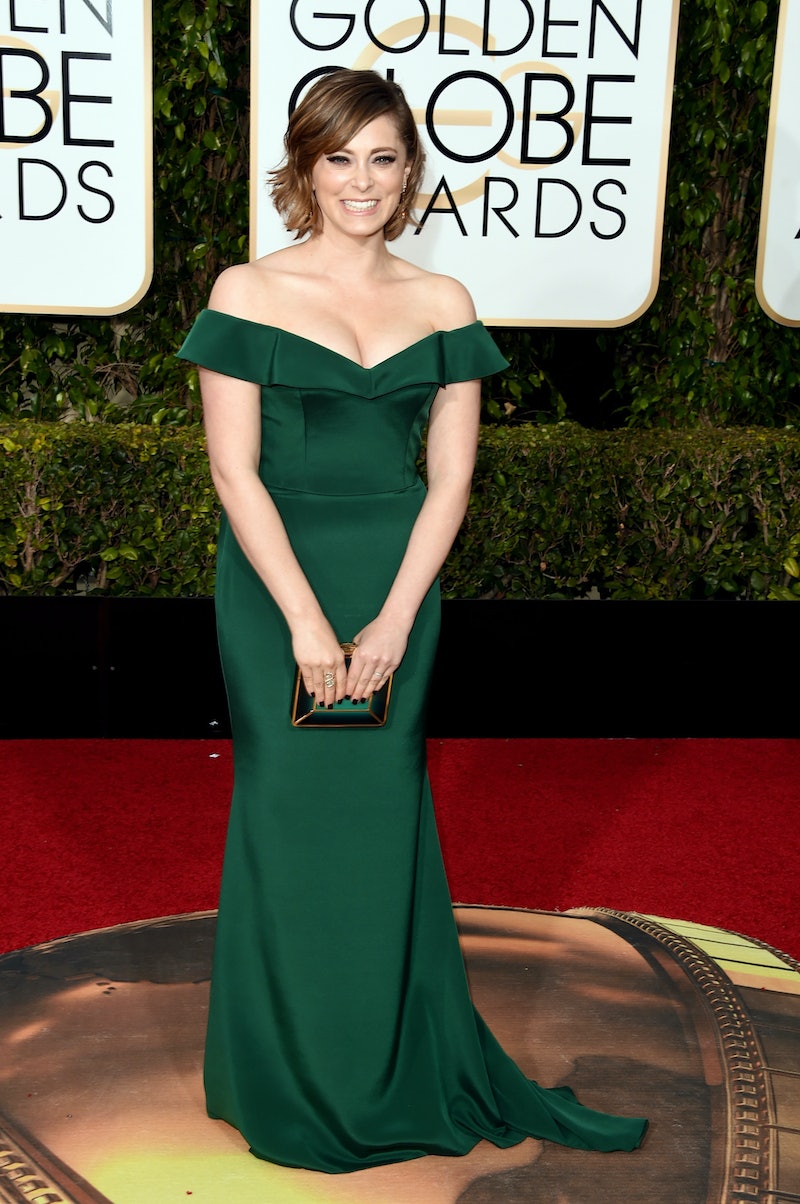 The Hollywood Foreign Press Association has a reputation for being more willing to honor brand new TV series than other awards shows, and it delivered on that during Sunday's broadcast. Crazy Ex-Girlfriend 's Rachel Bloom won the Golden Globe for Best Actress In a TV Comedy, and she was just as surprised as everyone else. This win is huge not just for a series that certainly wasn't guaranteed a sophomore season, but for female-lead and created shows overall. And the importance of this win clearly wasn't lost on the star and creator herself, as Rachel Bloom's Golden Globes acceptance speech showed more than just her excitement for being honored with a trophy — it proved her utter dedication to Crazy Ex-Girlfriend.

In addition to starring on the show as Rebecca, which requires dramatic, comedic, and musical skills, Bloom created and writes it alongside another woman, Aline Brosh McKenna. In her speech, Bloom acknowledged all of the challenges she faced in getting Crazy Ex-Girlfriend onto television, once she got through an endearing, relatable opening line. "Oh my god, oh my god. Oh, alright. Guys, guys, guys. I'm just going to talk to you like it's people and pretend that I am not on TV," Bloom began, before sharing just how hard it was to get her work on screen.

We almost didn't have a show. We made a pilot for another network and they rejected it, and we sent the pilot to every other network in Hollywood and we got six rejections in one day and we felt like crap, but we knew it was good, and Mark Pedowitz from The CW picked it out and he is the one who saved us, and he is the reason that there is a musical comedy on network television right now. And I can't believe I am saying that.

Many people likely can't believe that either, but Crazy Ex-Girlfriend fans know just how much the series' hilarious, perfectly fitting musical numbers enhance it. After addressing the series' unique qualities, Bloom continued to thank others.

The next person that I want to thank is my co-creator Aline Brosh MckKenna. Aline saw my YouTube videos, and two and a half years later I am standing on stage with a Golden Globe. I want to thank everyone at CBS ... I want to thank the amazing cast and crew ... I love you so much!"

Since Crazy Ex-Girlfriend's ratings haven't been stellar, a second season certainly isn't guaranteed, but this win may bring Bloom just enough buzz for the CW to keep it around. Basically, this Golden Globe is cause for many celebrations. It's honoring a totally unique series created by and starring women, and may ensure that those women get another season to show off their incredible talent.