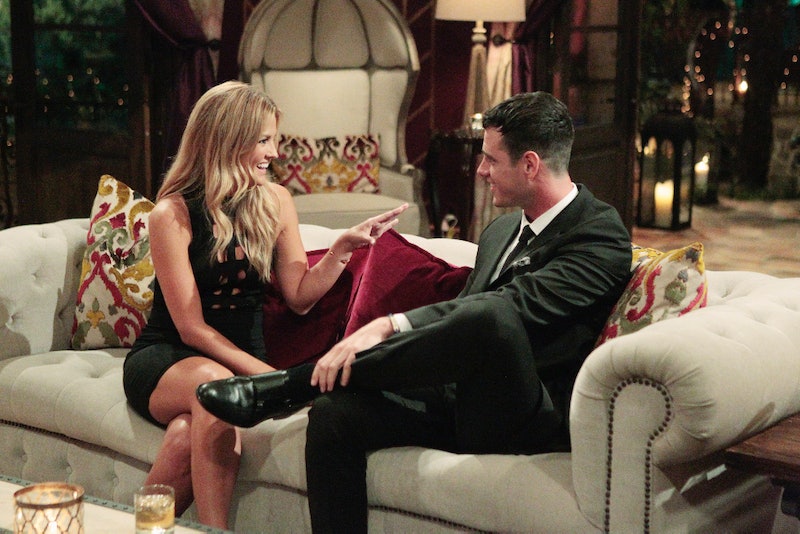 Bringing back previous cast members on The Bachelor can cause drama, but I think I speak for everyone when I say that it’s great to see Becca Tilley back on The Bachelor. She's beautiful, nice, smart and pretty much a perfect fit for Ben Higgins, so she's a great contestant to have on the show. But, despite all her other qualities, she's already getting pigeonholed for one thing again. Yes, Becca is a virgin. That was established on her season with Chris Soules, and discussed again with Chris Harrison when she joined Ben's season. So, does Ben know that Becca is a virgin? I’m going to go out on a limb and say yes, if only because it's all anyone seems to be able to focus on.

Ben has told reporters at a press conference that he didn’t really watch much of Chris’ season just in case one of the contestants ended up on his own Bachelorette turn. “I wanted to go in with kind of a clear mind and not have a lot of preconceptions about who people were,” he said. However, I find it a little hard to believe that he didn’t watch any of the episodes considering he came on the show hoping to date Britt Nilsson (as we learned during the Bachelorette premiere last May). Clearly he watched enough of Chris’ season to get to know Britt and Kaitlyn Bristowe, and it wasn’t really a secret that contestant Becca was a virgin on the show. Also a little bit of creeping led me to see that Ben has liked Becca’s tweets in the past BEFORE she wrote “Ben H is what most 26 yr old virgins named Becca are looking for,” after he was named Bachelor. So, it's possible he saw that one too, since he was keeping up on her social media accounts.

Regardless, I don’t think Ben really cares if Becca is a virgin. He doesn't seem like someone who would be quick to judge a woman on something like that. After all, it doesn’t make Becca any less awesome and there are a ton of reasons these two are pretty much perfect together.

1. She’s Looking For Her McDreamy

In case you didn’t know, Becca is a huge Grey’s Anatomy fan and she’s looking for her McDreamy.

Who's dreamier than Ben? t’s really no surprise that she would want to come back on the show.

2. They Care About Family

3. They Both Left Home

It’s a hard thing to leave home and start over in a big city. Ben Left Indiana for Denver and Becca left Louisiana for San Diego. Both of them put everything behind and made a new life for themselves.

Becca has never been super open about her religious backgrounds, but from her social media fans know that she definitely places an importance on faith, which is important considering Ben will probably want to be with a girl who shares his faith and religious beliefs.

5. It Takes A Strong Person To Go Through This Twice

As hard as it is for the other women who are going through this for the first time, imagine having to go through the process again! Becca must really want it to come back again.

6. They Would Make Beautiful Children

Maybe I’m thinking too far ahead, but if Ben Higgins and Becca Tilley had a baby, it would literally be one of the prettiest babies of all time. So, sexual history aside, the duo is pretty much meant to be.