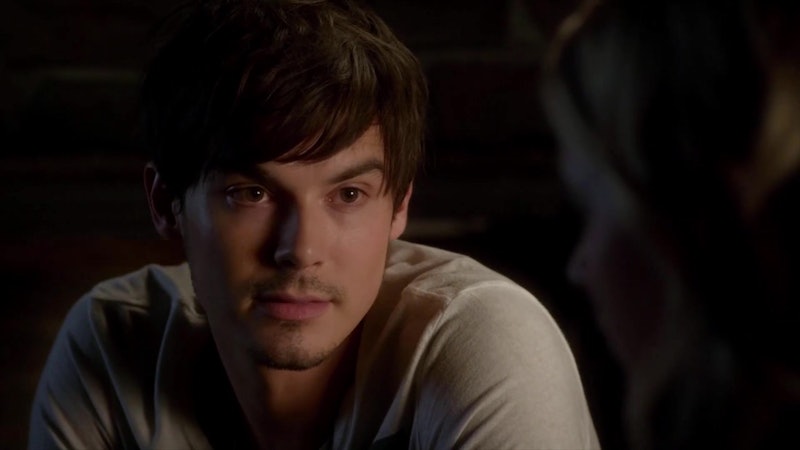 There was a time when Pretty Little Liars fans thought that they could rest easy after finding out that Charlotte DiLaurentis, who we once knew as CeCe Drake, was the person underneath that black hoodie all along. Of course, we now know that the show was never going to let us off that easy. A new villain will be at large when Pretty Little Liars Season 6B premieres, and based on the midseason finale flash-forward, it's very likely that this time around, the tormentor is a guy. While there have been plenty of sketchy men on PLL (Wren Kingston, what's good?), it's possible that the new episodes will see a beloved character become the new Big Bad, who fans are calling "B." Could Caleb be B when Pretty Little Liars returns?

Personally, I'm inclined to say "No way in hell," but since you have to explore every single possibility when it comes to Pretty Little Liars, it would be wrong not to acknowledge that Caleb has a few strikes against him. In terms of means and opportunity to be a villain five years down the line, Caleb certainly has both.

Caleb boasts insane tech skills, which were depicted as almost as savvy as A's — in fact, his skills helped thwart the masked villain many times over the course of the past six seasons. Now, five years after the Big A Reveal, Caleb is working for an unnamed company that is benefitting from his cray computer skills, so he may have a leg up on the villain this time around. One very real possibility is that the company Caleb works for could be very much connected to Uber A or B. The promos for Season 6B show A in all his high-tech glory, and it would be wrong to completely write off this fact when Caleb is one of the few people on PLL that we know has access to that kind of equipment.

Of course, Caleb getting even better at hacking doesn't mean that he is B — it simply suggests that he has the necessary skill set to play the Big Bad. The thing that we really need to establish in order to solidify a true A suspect is motive, and ultimately, Caleb's would be pretty weak. We don't know much about who Caleb is five years after the girls left Rosewood, but we do know that him and Hanna have officially split, and that she's engaged to someone else. That might seem like a reason to seek revenge for some other A suspects, but it doesn't exactly feel like a strong enough motive for Caleb. After all, if the ghosts in Ravenswood didn't send him completely over the edge, a breakup probably wouldn't either. It also wouldn't give him a reason to torment any of the other Liars.

There's evidence on both sides, but when it comes down to the very basics, the fact Caleb is a guy automatically adds him to the list of suspects for the mysterious "he" that the girls are running from in the future. But is he at the top of that list? While his tech skills certainly put him well above the bottom, I think we should be placing our bets elsewhere. Pretty Little Liars may look very different with Season 6B thanks to the time jump, but I don't think it would turn Caleb to the dark side.