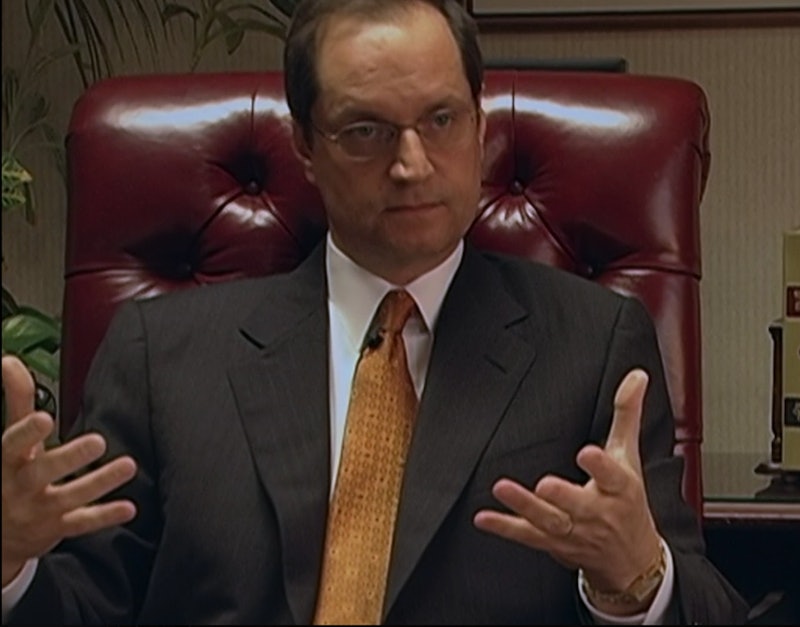 Though many might believe the Internet’s new boyfriend is Golden Globes winner Oscar Isaac, there are two strong pieces of evidence that say otherwise — and their names are Dean Strang and Jerome (Jerry) Buting. This pair of defense attorneys became unwitting sex symbols in the wake of the premiere of Making a Murderer on Netflix in December, with the Twittersphere exploding with lascivious comments about them. They've even gained fans in celebs like Kristen Bell, who's stated her love for Jerome Buting. Although Dean Strang has talked to USA Today about his wife’s bemusement at his new sexy status, the absence of comments from the other lawyer about his love life has Making a Murderer fans wondering if Jerry Buting is single, or if he too is married.

Fans of the series are familiar with Buting's worklife, as they've seen him struggle to defend Steven Avery in a high-profile murder case. As for his love life, though, sad news for lawyer-lusters everywhere: Buting is a married man. In addition to being one half of the power couple that is Jerry Buting/Dean Strang, the Milwaukee-Wisconsin Journal Sentinel reports that Jerome Buting is married to a woman named Kathleen Stilling. While the Internet fangirls collectively groan, let’s take a closer look at other little-known facts about this dapper attorney.

His Wife Is A Lawyer, Too

According to the Milwaukee-Wisconsin Journal Sentinel article, Stilling is a public defender and partner in Buting's Bloomfied, WI-based law firm. The Making a Murderer attorney met his future wife on his first day of work as a public defender's assistant in Milwaukee, and the two have been married for 26 years, working together "almost every day since 1981." Sorry, ladies and gents, sounds like he's definitely a taken man.

He's Taken On High-Profile Cases Before

Buting once took on another case that garnered quite the public buzz. The Milwaukee-Wisconsin Journal Sentinel article reveals that he once helped clear Ralph Armstrong, who was convicted in 1981 of the rape and murder of a fellow UW-Madison classmate, Charise Kamps.

His Social Media Following Is Blowing Up

Before the premiere of Making a Murderer, Buting told the Milwaukee-Wisconsin Journal Sentinel, he had eight Twitter followers. Now? He has over 33,000. Quite the leap for this Internet sensation.

His Son Is Studying To Be A Priest

The Milwaukee-Wisconsin Journal Sentinel reports that Buting was recently in Rome visiting his son, who is in the midst of his studies to become a priest.

He Truly Believes That Avery Is Innocent.

When asked in the Journal Sentinel if he thinks that Steven Avery is guilty of the crimes, Buting said that "there are no good answers to explain that [he] is guilty beyond a reasonable doubt."

It's good to see Buting using the unexpected attention to voice his opinion on the Avery case. It's clear that the Netflix hit show has had such a huge effect on the public; it even inspired a Change.org petition for the White House to pardon Avery, which was reviewed and rejected after close to 390,000 signatures. Here's hoping that 2016 brings more intelligent, impassioned TV subjects like Buting and Strang.