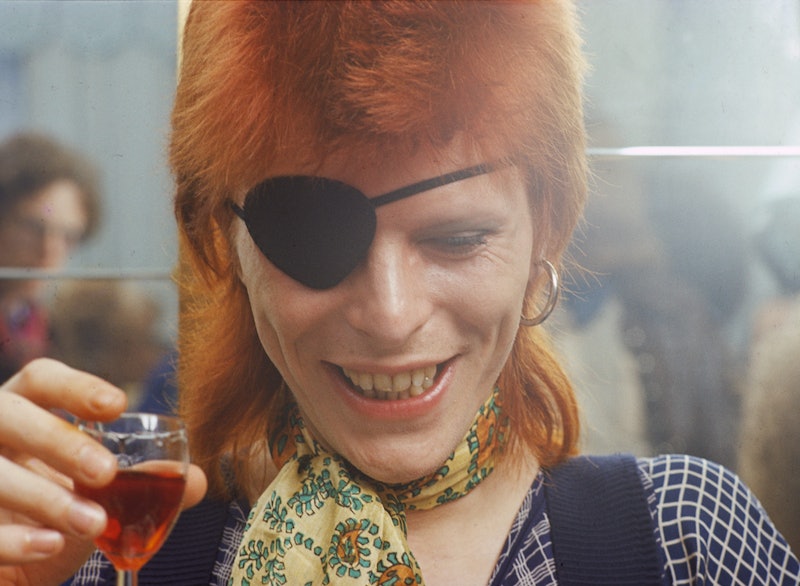 On Jan. 10, millions of hearts broke all over the world, as the tragic news hit that iconic musician David Bowie had passed away. As someone who held not only his music, but David Bowie's style in high regard, I was (and still am) heartsick. I adored everything about Bowie, or rather, the parts of his personality that he showed to the public. I think it will take a very long time for all of the Bowie fans' souls to heal, if they ever really do. But as The Hollywood Reporter told us, British comedian and actor Simon Pegg has said, "If you're sad today, just remember the world is over four billion years old and you somehow managed to exist at the same time as David Bowie." His words, to me at least, offer some comfort in this dark time.

Bowie was an ethereal being who seemed to exist far beyond the limits of this realm. It was easy to see from the music he created, to his relationship with and fear of mental illness, to the quirky outfits he wore, to his otherworldly makeup. Bowie was a hero of mine growing up. His music reached places inside me I never knew existed, and his ever-changing sense of dress helped me figure out my own image. From his lightening bolt face, to his piratical patch, and even his Goblin King costume from cult movie Labyrinth, his phenomenal style helped me define, experiment with, and ultimately construct my own aesthetic. So here are the style lessons I learned from the late David Bowie that I'll carry with me.

1. Don't Be Afraid Of Showing Your Creativity

After getting into David Bowie's music through my Dad — a super-fan who was lucky enough to see Bowie live, during his Ziggy Stardust Tour in our hometown — I slowly discovered his intriguing style. Who was this bizarre gent who sauntered around in capes, catsuits, and elaborate makeup? I loved how his creativity didn't start and finish with his music. Rather, it was an extension of his personality, whereby he could show the world what a creative soul he was. If you want to set your creative spirit soaring, you can truly channel your passions through your wardrobe choices.

2. Don’t Limit Yourself To One Look

Bowie was a style chameleon and his appearance changed as frequently as his musical genre. One moment he was rocking a red mullet, and the next he was sporting a suave, peroxide blonde 'do. Life is too short to stay stuck in a style rut, so if you want to change up your look or start wearing different outfits, please just go for it.

After all, who cares about what other people think regarding your fashion sense? The freedom to wear what you want, purely because you want to wear it, is one we should all feel able to exercise. There's no need to feel pressured to stick to societal norms and become confined to the constraints of what is popular or fashionable. Bowie was a master of androgyny — of experimentation — and he never seemed to give a damn about what other people, or society at large, thought of his stylistic choices.

4. Nautical Style Is Always In

IMO, nautical fashion is always awesome, as exemplified by Bowie wearing a piratical eye patch or a sailor-inspired outfit. As a fearless teen, I went out wearing a stripy top and a sailor hat in everyday life and even now, I arguably own far too much nautical-inspired apparel. You can go as big or as subtle as you desire when channeling your inner sailor, from a striped shirt and a red lip to a full-on vintage sailor dress.

5. Put Your Own Spin On Trends

Looking back, it seems like Bowie would pick out his favorite trends of the moment, but then take them to another level by placing his own stamp on 'em. For instance, the mullet was huge in the 1970s, but Bowie dyed his red, setting himself apart from the crowd. Catsuits were another look seen in the '70s, but instead of just sporting one in a trendy metallic shade, Bowie would wear ones in psychedelic patterns, futuristic shoulder pads often included. You can do this too, simply by deciding what your favorite trend of the season is and giving it a twist.

6. Adults Can Play Dress Up Too

What made Bowie's death so shocking to me was the fact that he seemed so young — so indestructible. His style made him ageless. He was someone who I thought would outlive everyone, only to get beamed up to the mothership thereafter. Bowie proved that playing dress up with fashion can be done at any age. It's supposed to be fun, right?

Do you want to make it to 70 only to wonder what life could have been like if you'd experimented more with your style? Sometimes we might look back at old photos of ourselves and cringe, but each step along the style journey ultimately leads us to a new place that we never would have reached had it not been for the outfits making us grimace. Besides, I'd much rather look back on images of myself and marvel at how ballsy I once was than look back and regret my safe fashion and beauty choices.

Bowie's extravagant personality, life-changing songs, and unique style will undoubtedly live on. What better way to commemorate him than by being unafraid of sticking out from the masses? Rest in peace, Ziggy.