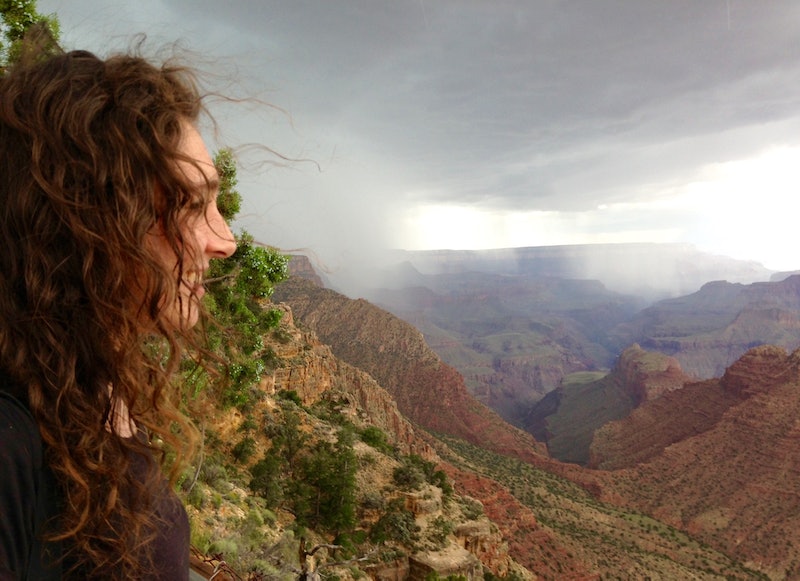 I have a tendency to wear my heart on my sleeve, and incidentally, that's exactly where my tattoo sits. It’s a small line drawing of a sailboat that floats on my left wrist, just at the edge of where I end and the world around me begins.

I’m at a party, talking to a guy I just met that night. He’s a happy, Midwestern dude, with bright eyes poking out above a beard that should've been trimmed at least a few days ago. I carelessly wave my hands around mid-story, and as I do, I see his eyes flash toward my left hand.

“Oh, yeah, it is...” I answer, caught off guard by his interruption, and caught even more off guard when he grabs my arm and pulls it toward him. He examines my tattoo; my skin is close enough to his face that I can feel his beer breath.

“Is it, is it a boat?” he asks, somewhat skeptically.

“Yep. It’s a sailboat.” I pull my arm back and gently rub my wrist.

He calls over a couple of his friends and announces my tattoo. They each snag a peek, then Bearded Guy begins the torrent of personal questions that almost everyone asks about tattoos, ultimately landing on the one that's always the hardest to answer: “What does it mean?”

“Oh, it’s personal,” I say, shrugging it off. But he demands more openness of me, and his friends echo his prying curiosity. When I tell them it’s inspired by a song that I love, he hounds me until I surrender the name of the band. He races to a nearby laptop and starts playing every song in the band’s discography; the rest of the party is now focused on him and his goal. Everyone watches as he skips through tracks, finally landing on the one that references a boat in its lyrics.

I respond, “Yeah, that’s it.” Am I supposed to congratulate him now?

He sits in front of the laptop while we all listen to the song for a a few moments. I feel more exposed than I’ve ever felt in my entire life. Bearded Guy pauses my song in the middle and switches back to the Kanye track that was playing before. He gets up and heads back to the bar. “Well, anyway, cool tat.” I nod my head, crack a weak smile, and continue rubbing the sailboat at my wrist, right where he grabbed me.

I realize that most of the people who ask me about my tattoo are just trying to be friendly and get to know me better. But the ways we mark up our bodies are personal, and just because a mark is visible doesn't mean it's your right to know about it — whether it’s a tattoo, a scar, or a dramatic haircut.

I love connecting with other people. I love smiling with a stranger at the gym as we take turns filling water bottles, or chatting with a kid who just wants to show me his new book. I love hearing a friend’s story over coffee, learning what's really making them laugh or cry today. I love sharing my own stories with others, too. I love opening up and letting my neuroses spill out. I love thinking that I am, perhaps, making my corner of the world a bit more open and understanding. But I struggle when it comes to talking about my tattoo with people.

As soon as I got inked, my little tattoo became a source of strength and hope for me; inspired by a song that inspired me, it was a reminder of my own spirituality. On top of that, my tattoo's kept me grounded. If I were a character in Inception, my tattoo would be my totem.

It’s one thing to tell someone how I burned my thumb on the panini press in my campus dining hall, or how I broke my finger taking off a pair of pants (both true stories; clumsiness seems to be my fatal flaw). It’s one thing for me to tell someone about the birthmark on my leg, the dark spot of skin that simply appeared on my body right along with my green eyes and my brown hair. These natural marks are easy to explain.

It’s another thing entirely to tell someone about the the marks on my body that exist because I’ve chosen to put them there, the ones that have some emotional attachment. How do I casually explain to someone that my tattoo helps calm me down during anxiety attacks? That it makes me feel connected to a relative who died a rough death at the end of an unfinished life? How do I explain what it feels like to lie next to a partner, watching him graze his fingers over my tattoo after I've shared the deepest stories behind it? How do I tell someone that touching my tattoo reminds me of the song that has empowered me more times than I can count? How do I explain all of that to a drunk stranger at a party? I shouldn't have to.

Since my tattoo is visible to the public, everyone I interact with can see this little piece of me, so I don’t fault people for asking about it. I realize that most of the people who ask me about my tattoo are just trying to be friendly and get to know me better. But the ways we mark up our bodies are personal, and just because a mark is visible doesn't mean it's your right to know about it — whether it’s a tattoo, a scar, or a dramatic haircut. Our bodies are the physical manifestations of our inner lives. They carry not only birthmarks, but lifemarks too. Sometimes we feel like explaining those lifemarks, and sometimes we don’t.

I’m sure there are some people who would jump at the chance to show off their tattoos to anyone they meet. In fact, I know those people are out there, because I was one of them when I first got mine. Initially, I had the impulse to show off my tattoo with reckless abandon. But, just like me, my tattoo changes over time. The more experiences I have, the more my tattoo means to me. The longer I have my tattoo, the more personal it becomes, and the harder its meaning is to convey in simple terms to others. But that’s just me.

I don’t want to discourage emotionally honest conversations. I never want people to worry about censoring themselves, or being overly concerned with how they communicate with me to the point that their concern ends our communication altogether. However, I do hope that in addition to being emotionally open, people can be more emotionally perceptive. Notice the way someone shifts when you ask them a question about their tattoo, the way they non-verbally answer you, or the way they don’t answer you at all. Sometimes they’ll want to share, and sometimes they won’t. The thing is, if these sorts of open conversations were met with a bit more sensitivity and compassion, I have a feeling a lot more of them would be happening.

I wear my heart on my sleeve, but it’s not there for people to grab at whenever they please. Give me the chance to roll up those sleeves on my own, and I'll be happy to share my stories with you.