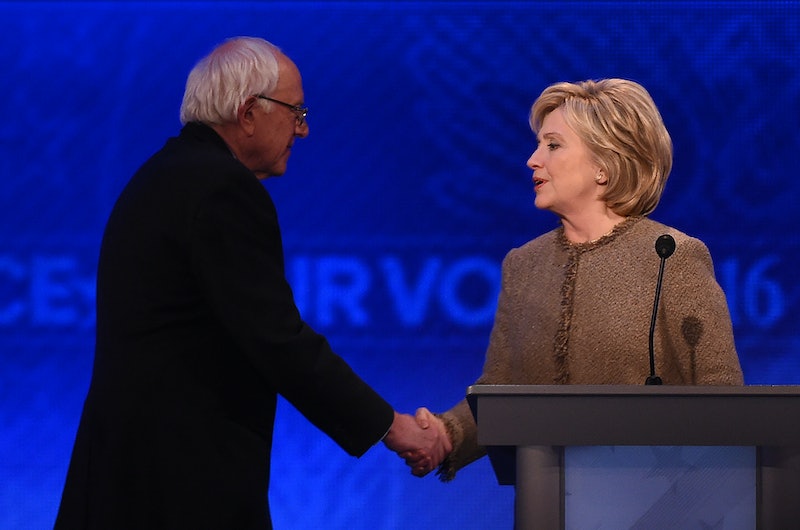 From serious things like politics and religions, to less serious but still important items like how often “Netflix and Chill” was mentioned, OkCupid's 2015 Hangover report uncovered exactly where the heads of OkCupid’s members are at, along with what that might say about the upcoming year.

But that’s not where the fun stops. Here are seven other important things to come out OkCupid’s report on 2015, along with who the members are leaning toward in the big presidential race.

Although I cringe every time I hear it, over at OkCupid the word “bae” is a big hit, with it being used twice as much as it was in 2014. Other words that were used quite a bit, and for the first time, were “fleek,” “dad bod,” and of course “ghosting," because it was definitely the year that ghosting became a part of the dating scene. I’d love to see a profile where all those words are used at some point, but sometimes turning dreams into reality is hard.

3. Most People Brush Their Teeth At Least Twice A Day

In some really great news, since hygiene is a total dealbreaker for many, the report found that most people brush their teeth at least twice a day. Phew! Nothing says, “goodbye lover,” like stinky breath.

4. Most Users (97%) Approve Of Interracial Marriage, But Some States Have A Ways To Go

Some Southern states are still living in the dark ages with the 18 percent of people in Mississippi thinking interracial marriage is wrong. Not far behind is Arkansas with 12 percent and Alabama with 11 percent.

5. OkCupid Has A Healthy Percentage Of Atheists

According to a Pew religious survey, three percent of Americans are atheist, while two percent are agnostic. However, on OKCupid, 13 percent consider themselves atheist, while 12 percent fall into the agnostic group. I guess it’s safe to say, if you’re looking for a heathen, OKCupid is a better place than the rest of the country, in general, to go searching for one. I might have to sign up.

6. Trump's Mentions Are On The Rise

In getting back to politics, OkCupid found that the world “Trump” in profiles has increased 7x times compared to 2014. As the report also found and I quote, “Completely related, the usage of ‘idocracy’ has doubled,” so if we put that in the same sentences as Trump, I think we’re doing A-OK.

7. Hillary Clinton Needs To Step Up Her Game

And who’s the most popular and favored democrat on OkCupid? Well, not Hillary. So it must be… You guessed it! Bernie Sanders! Bernie is getting four times as many mentions than Hillary and broken down into percentages, that’s 81 percent versus 19 percent. Sorry, Hillary. But you still have time to win over OkCupid members ― the year is still young.