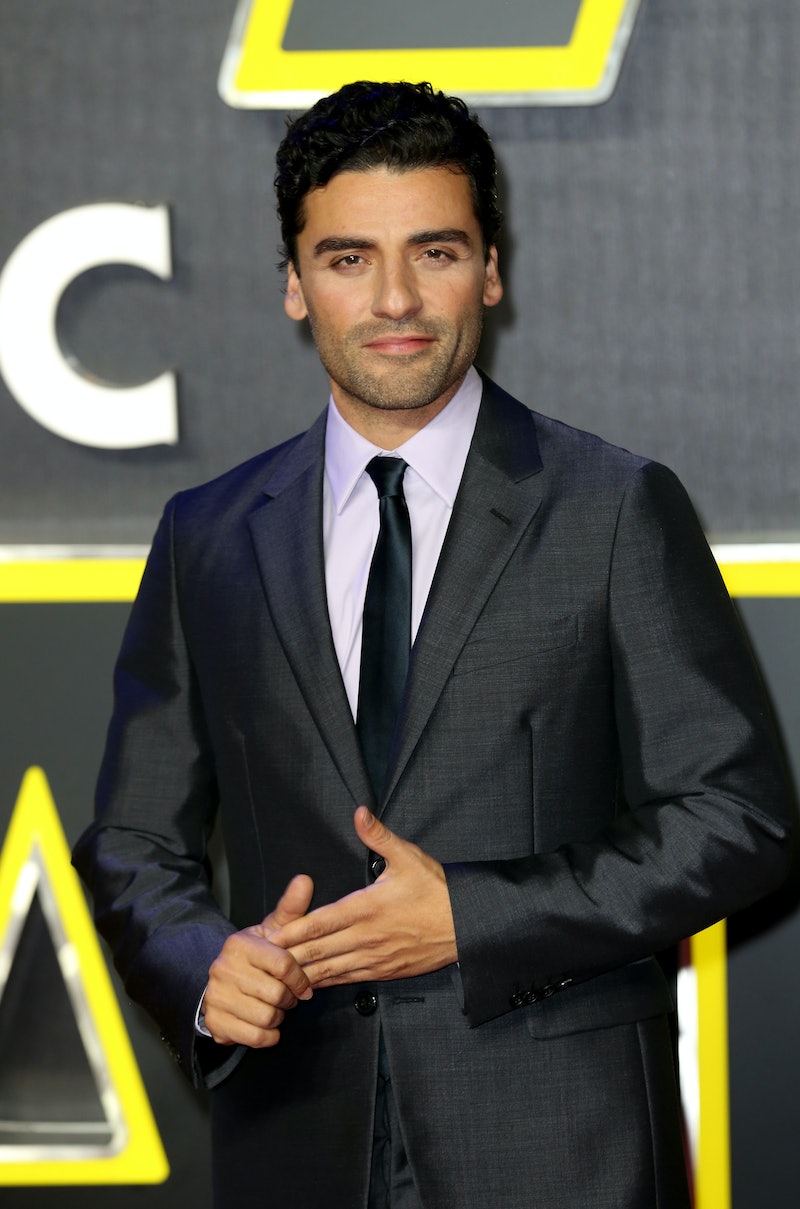 After winning a Golden Globe for Show Me A Hero and continuing to ride the ever-growing success of Star Wars: The Force Awakens, Oscar Isaac is arguably having a better 2016 than everybody else. Given this recent attention (and let's be honest, his attractive face), fans can't help but wonder: Is Oscar Isaac dating anyone? This has been a longstanding mystery, since the 36-year-old tends to keep his love life under wraps. He was rumored to be engaged (if not secretly married) to a woman named Maria Miranda. But then, things became much more clear when Isaac attended the Golden Globes with Elvira Lind. So that settles it, right? Nope, not so fast! If only it was that simple.

Quite a bit of confusion comes from the fact that the press (myself included) may have been mistaking Lind for Miranda over the past year. When Isaac was photographed wandering the streets of New York with a blonde in January 2015, sites like Just Jared credited the woman as Miranda. But if you look closely, it looks a lot like Lind — so much so, that I'm 99 percent sure that's who's in the picture. There haven't been any actual official photos of Miranda with Isaac, so it's actually possible they broke up a long time ago, and the media never knew what she looked like.

Does your head hurt yet? Don't worry, I'm here to help. Let's recap what fans do know about Isaac's love life and try to make sense of this messy situation.

In December 2007, the New York Daily News reported that Isaac proposed to longtime girlfriend Miranda. The story recounted details about the proposal, including that it took place in front of the Lincoln Center Fountain and "she said yes — jumping up and down excitedly, and they were kissing." As the article notes, Isaac was performing at Shakespeare in the Park's Romeo and Juliet, so he wasn't the big name he is today. It'd be surprising if an entire story about an adorable engagement was fabricated.

In addition, the Mirror called Miranda his "childhood sweetheart" in a 2010 article: "Oscar is still said to be engaged to childhood sweetheart Maria Miranda after proposing in December 2007." If she's someone he knew from childhood, rather than a fellow celeb, that would explain why she's so far out of the spotlight.

So, did Isaac and Miranda ever get married? There were rumors that they tied the knot and later got divorced, but no one knows for sure. Considering 2007 was nine years ago, a ton can happen in that time period — including a breakup, which seems like the most plausible explanation here.

Isaac Alluded To A Girlfriend In A Recent GQ Interview

In GQ's January issue, The Force Awakens star hinted at having a girlfriend. But because he's quite possibly the most secretive person ever, he later tried to retract that statement. As the magazine noted,

Moreover, he has shown himself to be a lifelong non-joiner and an actor so private about his private life that the mere use of the word girlfriend leads him to try to take it back the next day.

This means that he most likely is in a relationship at the moment. As for who that relationship is with, keep reading and you'll find out my best guess.

At the 2016 Golden Globes, Lind joined Isaac as his date. When walking up for his trophy, the actor even stopped to kiss Lind on his way to the podium. So that settles that, huh? She must be the mystery lady in his life. And in case you're still skeptical (or just in denial), you can watch the video for yourself below.

After the show, Lind tweeted a photo of Isaac's lightsaber battle with Jacob Tremblay. The Twitter account seems official, since it's been around since 2009 and links to her professional website. So there's no doubt that she attended the Globes with Isaac.

Elvira Has Been In The Picture For Awhile (Literally!)

Excuse the random hashtags in that tweet. Instead, look at the blonde woman in the photos. Is it just me or does she look a lot like Elvira? It's totally her, right? As mentioned earlier, the confusing thing is that Just Jared credits Miranda as the woman in the photo. This means they may have gotten the names confused and mistaken Lind for Miranda.

Even if that's not her in those photos, Lind attended the South by Southwest Festival with Isaac in March 2015. She appears alongside him in various red carpet shots. Why didn't the media pick up on this sooner? As a user wrote in the comments section of a Celebitchy article,

Oscar wasn’t with Maria in the summer 2015, there is photos of him and Elvira walking in the streets in january 2015 (and they posed at the Ex machina premiere in march). I think the first time I saw him with Elvira was in june 2014, when he was out with his friend Kirsten Dunst. (There are photos at the dailymail). Elvira worked on his movie, the most violent year. I think the press just continued to call her Maria.

Granted, this isn't a vetted source — it's just an observant fan, but it sounds like they're seriously onto something. Which leads to my next point...

There May Be A Serious Mix-Up Going On

Even after the Golden Globes, there was confusion about who was actually Isaac's date. Since he's so private, it appears as though people just assumed the woman he was with was his former longtime, rumored fiancé (possible ex-wife) Miranda. Even IMDb mixed up the two ladies, as seen in the following tweet:

That's not the only place that IMDB is adding fuel to the confusion. On Lind's IMDb page (she's a director), they have "Maria Miranda" listed as her credit in a movie, as well as under "Alternate Names."

Does she really have an alternate name? Maybe this is a secret stage name. It's farfetched, but maybe she wanted to have two first names (Maria/Miranda just like her boyfriend, Oscar/Isaac). Or is the couple trolling everybody and there never was a Maria Miranda? Fans have even tweeted about the mystery, and honestly the whole situation is fascinating.

Here's my conclusion on the matter: Isaac is dating Lind and there are two plausible solutions to explain the mix-up. Either "Maria Miranda" is a pseudonym that Lind chooses to go by just to confuse the media, or (the more likely option) they're two separate people and everyone has been accidentally confusing them for more than a year. In which case, poor girls!

More like this
Selena Gomez Is Fine Being Single, But She Still Manifested Romance On 'SNL'
By Martha Sorren, Jake Viswanath and Jack Irvin
Everything To Know About Obi-Wan Kenobi Season 2
By Kadin Burnett
Who Is Liam Neeson's Character In The Obi-Wan Kenobi Finale?
By Kadin Burnett
Are Quality Time & Words Of Affirmation Love Languages Compatible?
By Lexi Inks
Get Even More From Bustle — Sign Up For The Newsletter