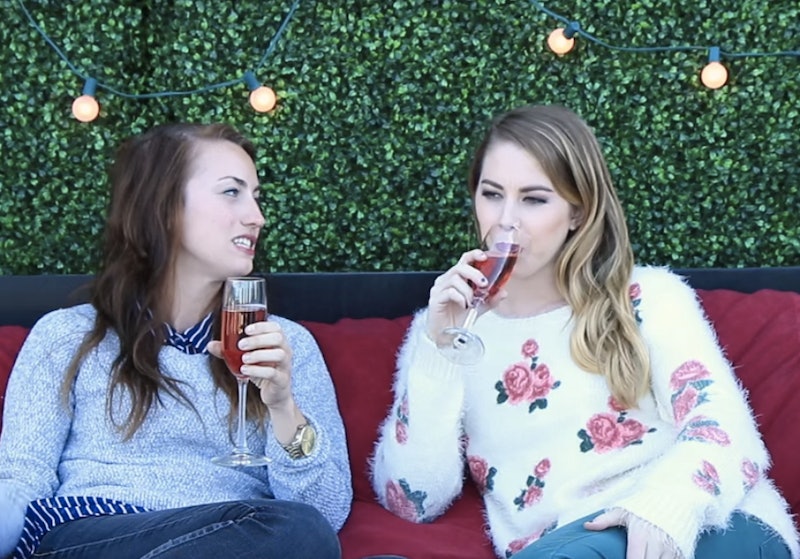 It doesn't come as a surprise that in BuzzFeed's latest video, "Questions Gay People Have for Bisexual People," the very first question asks, "Is bisexuality even a real thing?" Between the legalization of same-sex marriage, openly queer role models in the media, and employment protection in many industries, the LGBTQ community has never been more visible than it is today, and yet bisexuality is one of the least discussed identities out there. Part of this stems from the fact that unlike homosexuality, many people believe bisexuality simply doesn't exist — rather, anyone who is attracted to both genders is "greedy," seeking attention, or merely confused (and probably scared to admit they're gay).

Of course, these stereotypes are exactly that: Stereotypes. However, many people still believe them to be true — including other people within the queer community. Fortunately, simple discussion is often enough to dispel such beliefs, and BuzzFeed provided a platform to do just that. In the video, people who identify as gay sat down with people who identify as bisexual to ask all the questions they've always wondered about, and the results speak volumes about the pervasiveness of bisexual stereotypes, even in 2016.

Once the tired old question of whether bisexuality exists — of course it does — was out of the way, questions initially focused on its perception, both in the queer community and in general. When asked whether gay men are "mean" to him, one participant's hesitation spoke volumes about the in-between space bisexuality seems to occupy: Not straight enough for heterosexuals and not gay enough for homosexuals, many bisexual people face harmful stereotypes from both sides. "Bisexual women, specifically, get a lot of hate from the lesbian community because we get labeled 'greedy,'" one woman explains.

The subject then moved on to promiscuity — more specifically, how bisexual people's sex lives differ from person to person, just like everyone else's. One woman's response sums it up perfectly when asked whether bisexual people have more threesomes than average. "I don't fucking know," she says crossly.

Later, a man discusses an experience common to many bisexual people: Encountering people who won't date anyone who identifies as bisexual. "I had a girl... say that she liked me but wouldn't be interested in doing anything with me because I'd been with a guy before," he says.

For people who aren't inundated by these questions on a daily basis, however, the video is an excellent primer on the reality of being bisexual in the modern day. Check it out below: