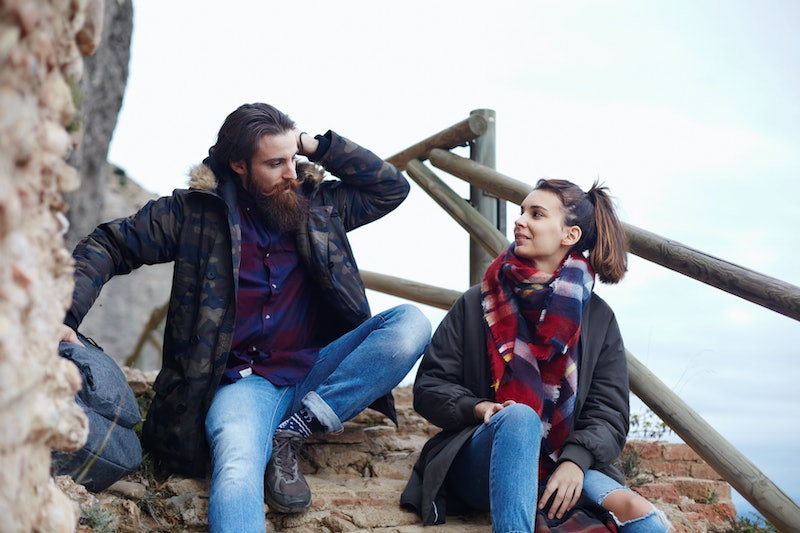 While it isn’t necessarily a bad thing, sometimes not being emotional can negatively affect a relationship. “If you’re not authentically experiencing, expressing, and learning from your emotions, then that erodes trust, security, intimacy and closeness,” Jared DeFife, Ph.D, a clinical psychologist and relationship coach in Atlanta told PsychCentral. Keeping one’s emotions to themselves can definitely feel like a great way to self-preserve, but if you’re their partner, it can feel like you’re banging your head against the wall.

Everyone has different levels of emotions. Some of us are very emotional, while others not so much. Having dated men on both end of the spectrum, I can say that there are pros and cons to both types of people, but as an epically emotional person myself, I’m more able to relate to the emotional person who can cry, rather than the one who doesn’t throw it all out there. I would go out of my way to provoke an emotion from my emotionless partners and it never got me anywhere, except into an argument, of course. Those who keep it all locked up inside are difficult eggs for me to crack.

But there are ways to handle a partner who isn’t very emotional and do so without ending up in fight or alienating them. Here are seven ways to do just that.

If you’re an emotional person, you already know that you can’t become a person who is less emotional no matter how hard you try. Since that’s the case for you, then you can’t expect a partner with little emotions to change either. You might think that you’re helping by giving them a nudge, but you could be pushing them even further away.

2. Specifically Invite Their Emotions To Join The Situation

For some people, they need a personal invitation to share their emotions. A simple, “How do you feel about this?” can open the doors to a dialogue and make them feel like what they have to say isn’t just welcome, but an important part of the conversation.

If and when your partner does open up, don’t judge. Don’t even make a joke as a means to try and lighten up the conversation. You want to give your partner a safe haven for their emotions, a place free of judgment where they feel their emotions are respected and valued. Even a joke can make them pull their head back into their shell like a terrified turtle.

4. Realize There’s A Reason Why They Can’t Be Emotional

Whether it’s because of an inherent fear or something that happened in their lives that made them shut down emotionally, you need to understand that it isn’t about you. There's a reason behind their lack of emotion; they're not deliberately emotionless, but simply the way they are.

Just because someone isn’t very emotional on the surface, doesn’t mean there isn’t a festering bucket load of emotions underneath. What that means is that just because you can’t see anything, doesn’t mean that your partner isn’t moved or affected. Unless of course they’re a replicant and you’re living in Blade Runner.

6. Be Aware Of Your Own Responses

Some people back off on being outwardly emotional because they don’t want to somehow throw their partner off balance, especially if they’re more emotional. It’s as if they’re putting on a brave face so you can be the one who falls apart, if that’s what the scenario calls for. But you need to realize that if you dominate with your emotions, you may not be giving your partner space to even express theirs. So it’s important to look at how you react and respond to not just them, but other situations in which you find yourself.

7. Learn To Accept It

As I said, with the partners I've had who weren't emotional at all, I would go out of my way to try to get a rise out of them. I wanted to see them express an emotion, any emotion, and it drove us both crazy. They weren't going to change no matter how hard I tried, and my antics were just causing more problems than their lack of emotions ever could. In the end, I needed to accept that that was the way they were and if I didn’t like it, I could go someplace else.

More like this
The Best Time To Date After A Breakup, According To Experts
By Bustle Editors
Hinge's New NFAQ Feature Is Demystifying Queer Dating
By Emma Carey
Virgo & Sagittarius Zodiac Compatibility, According To Astrologers
By Kristine Fellizar
How To Change Your Twitter Handle
By Emma Carey
Get Even More From Bustle — Sign Up For The Newsletter