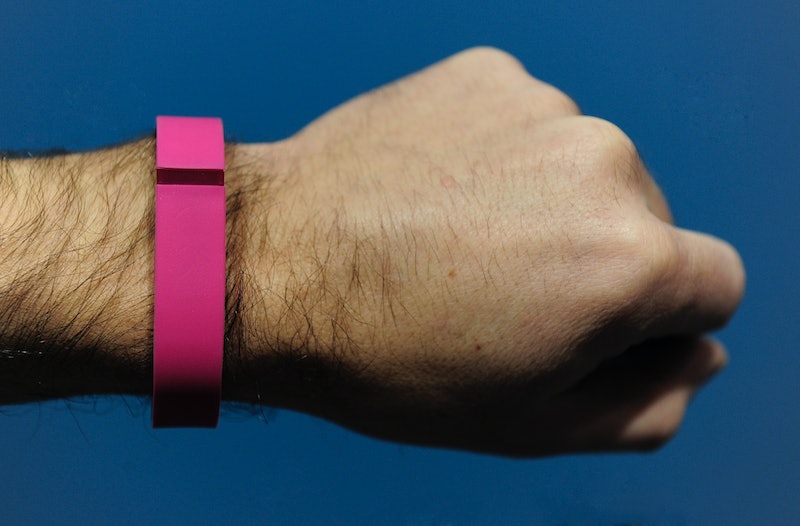 There's one thing that your fitness tracker can't do, and that's tell a lie. So when yours tells you that heartbreak is a real thing, you listen — especially when the proof comes from a guy who wore a Fitbit during a breakup. Koby Soto of Tel Aviv, Israel was wearing a Fitbit Charge HR (which monitors your heart rate) when his boyfriend called him around noon and broke up with him. Upon later consulting his Fitbit chart, he made a surprising discovery: His Fitbit had picked up on his heartbreak and tracked it throughout the day. Pre-breakup, Soto's heart was beating at its normal 72 BPM. Post-breakup, not only did it jump to over 88 BPM, but it stayed elevated for the remainder of the afternoon, going as high as 118. In fact, his heartbeat was so elevated that Fitbit classified it as cardio.

Soto shared the picture of his chart with his Twitter followers, with the tweet receiving over 1,200 retweets and almost 1,600 likes. We already knew that sadness from a breakup, grief from a loved one's passing, etc. is bad for your health; but Fitbit has now demonstrated that heartbreak is a real, tangible, measurable happening. Soto's was not merely a quick spike in heart rate; it was a maintained, elevated, physical state of being.

The American Heart Association has already determined that Broken Heart Syndrome, also known as stress-induced cardiomyopathy or takotsubo cardiomyopathy, is a real thing. This sudden, intense chest pain is a result of a forceful release of stress hormones. It can be triggered by a loved one's passing, a betrayal, rejection, or — dun dun dunnnn — a breakup or physical separation. It's often misdiagnosed as a heart attack because they look so similar; but broken heart syndrome doesn't show the same signs of blocked arteries. When you're experiencing BHS, one part of your heart temporarily enlarges and can't pump blood normally, while the rest of your heart is either business as usual, or busy trying to pick up the slack.

The cool thing about being able to measure this is that you can continue to monitor your Fitbit to get an idea of when your body and mind are starting to heal after the heartache. And I guess the silver lining here is that Soto got his cardio in without having to lift a finger. Yeah? Maybe? Hang in there, Koby! This too shall pass.

More like this
50 Valentine’s Day Instagram Captions To Post If You’re Single
By Jessica Booth, Lexi Inks and Carolyn Steber
12 Active Date Ideas That'll Get You & Your Boo Outside
By Lexi Inks
18 Hinge Prompt Answers To Try If You’re Looking For Something Casual
By Lexi Inks
My Partner Wants Me To Wear A Diaper During Sex. Help!
By Sophia Benoit
Get Even More From Bustle — Sign Up For The Newsletter
From hair trends to relationship advice, our daily newsletter has everything you need to sound like a person who’s on TikTok, even if you aren’t.