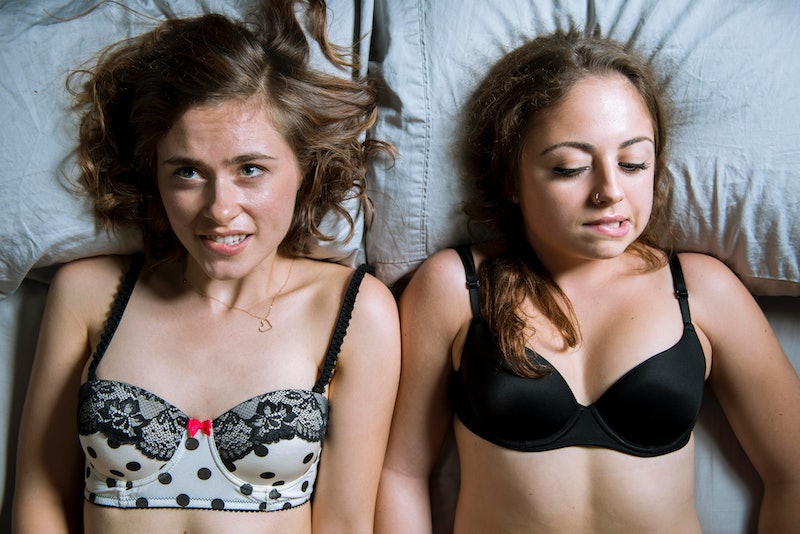 One of the most fun parts of the break up (maybe the only fun part) can be having breakup sex. It normally happens if you broke up on mutual terms and in private (I can't imagine the couples I see breaking up in Chipotle having breakup sex, but maybe I'm wrong). Or when you meet up to 'trade stuff', or some other random excuse that's really just a reason to hang out again— is that just me? Tell me that's not just me. The point is, it's all hot and confusing and can be really great. It can.

It's also can be really crappy. And it's normally not the best decision for your mental state and general well being. Not that it should make you feel bad for doing it, I mean a lot of us have done it— dear god, have I done it. And trust me when I say I've made all of the mistakes that come afterward. Everybody is different, but most of the time I would say breakup sex is more of a mindf*ck than it's worth. I know that's not how it's portrayed in rom-coms where it leads to you getting back together because YOU LOVED EACH OTHER ALL ALONG and running into the sunset. But in my experience it's more a quickie with half of your clothes on and a sort of "... now what?" afterward. That's the version we don't like to talk about.

Here are six things no one tells you about breakup sex:

When you have a breakup, there are a lot of hot headed emotions, a lot of strong feelings, and a usually a whole lot of tension. That's why sex happens... sometimes. Sometimes it's just a lot of expectation but one of you is clear headed enough to realize it's a bad idea, and then you're just left feeling a little silly with a lot of frustration. Take my word for it and don't count on it.

It shouldn't be great, right? You've just decided why you shouldn't be together. Maybe you're angry or hurt. Maybe just really sad and emotional. But none of that is exactly Marvin Gaye in the background in terms of aphrodisiacs. And yet, for some reason, sometimes it's just super, super hot. Which feels a little wrong. But that makes it even hotter. Man, we are messed up.

3. But It Won't Necessarily Be

Even weirder than it being great, is the palpable uncomfortableness that comes with having really bad breakup sex. It can be anticlimactic, clumsy, or just not very good, but you don't have any of that relationship goodness to fill in the cracks. Instead you're just having really weird bad sex with someone you've just decided you don't want to be with and it's strange as hell.

4. You Sort Of Won't Know When To Stop

Whether it's the sex or the post-sex cuddling or leaving the bed, at some point the spell is broken. Eventually, you're going back to the reality that you're broken up, so one of you is probably going to linger. Or just go for another round. Anything to avoid the judge-y, judge-y outdoors.

No matter how set you were in your breakup, sex can confuse things. You start to feel loved-up again (or just remember how good they are in bed) and suddenly the reasons for breaking up don't seem to make quite so much sense anymore. Whether you decide to get back together, or just end up in that horrible "we're exes who are still hung up on each other but are still having sex" area, you have to try not to get stuck in that loved-up glow.

6. It Is Awkward AF Afterwards

You think that lying around after sex is awkward after a one-night stand or a bad hookup? That's nothing compared to breakup sex. What do you say to each other? What does it the other one thinking? What does it all mean? Yeah, sometimes it's super sexy and hot and a great way to say goodbye, but other times you're just lying their naked and uncomfortable wondering "What next?". Be careful out there.