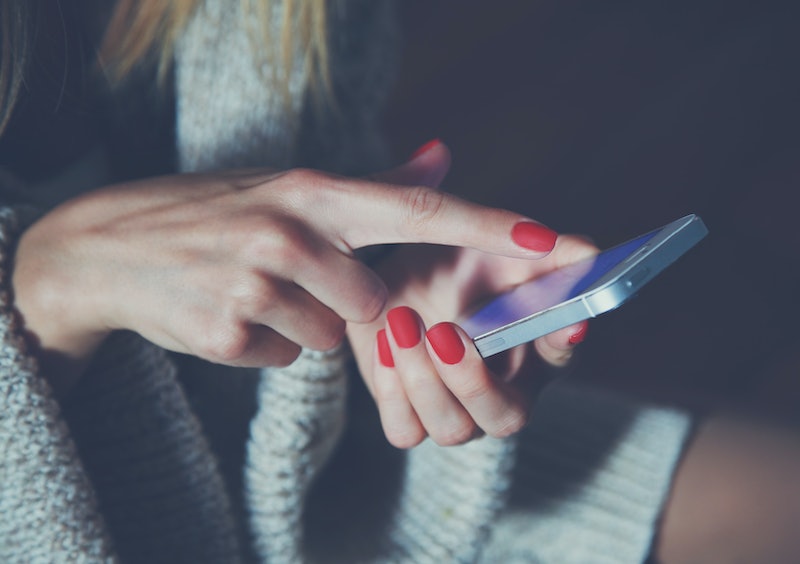 Aside from people, now you can match with an STD or HIV clinic through Tinder. (I know that sounds romantic, but stay with me.) It’s part of a new Health Safety section on Tinder that allows users to find a nearby clinic to get free STD and HIV tests via Healthvana, a patient-engagement platform for health clinics. “It's a resource where people can learn a bit more about their sexual health, and having the biggest dating site in the world have it on there is a giant step forward,” Ramin Bastani, CEO of Healthvana, tells Bustle.

Users can compare and contrast clinics, doctors, and online providers through Healthvana’s site. Plus, no need for phone or in-person test results; they can receive them electronically. You can see Healthvana in action here, getting your records via phone app and having them easily accessible for anybody you need to share them with, whether that means doctors or sexual partners.

“Staying healthy in today’s dating world means getting tested regularly, practicing safe sex and having honest conversations about your HIV and STD status,” Bastani said in a press release. “Healthvana empowers people with actionable health information at their fingertips so they can make better decisions. We already have hundreds of thousands of people using our testing locator to find free, quick and confidential testing at sexual health clinics near them.”

Within two hours of the billboards going up, Grindr stopped AHF’s paid advertising for its free STD testing service on the site. Also last Fall, Tinder wanted their names off the AHS billboards and sent a “cease and desist” letter to AHS. A few days later, AHS responded.

“AIDS Healthcare Foundation (AHF) received your September 18th letter and respectfully declines to remove all references to Tinder in AHF’s billboard campaign. Furthermore, AHF has not made any false or disparaging statements against Tinder and therefore has no reason to cease making any such statements… Rather than trying to chill AHF’s public health message by threatening AHF with frivolous lawsuits, AHF urges Tinder to support its message of sexual health awareness by encouraging Tinder users to get tested for STIs and to get treated promptly if they have an infection… In short, AHF urges Tinder to rethink its attack on AHF’s message and re-direct its energy toward supporting the health of the consuming public who have made Tinder the success that it is.” –Laura Boudreau, Chief Counsel for Operations for AHF

It's not the first time that dating apps, and not lack of sufficient sex education, have been blamed for the rise in STDs — studies have actually suggested the same. But now that Tinder has added the Health Safety section and the STD/HIV clinic locator and aims to educate users about sexual health, AHS has agreed to remove the billboards and mentions of Tinder.

I think the idea of the STD locator is great, just not how it came to be. Plus, I hope people use it. As someone who writes about sex, dating, and relationships, it never ceases to amaze me how many people I speak to think someone they’re dating “looks” safe and, hence, they have unprotected sex with them. When I ask when they were last tested for STDs, oftentimes they do not remember. I have dated a few people like this, too, and one even confessed he had never used a condom in his entire life… and he was in his 30s. (Guess who decided not to have sex with him?) “Under ‘Know Your Status’ in the Health Safety section, it says, ‘Some STDs don't show symptoms,” Bastani says. Exactly!

"The CDC also noted, the majority of these infections are affecting young people — the demographic that is on their mobile phones all day long," Whitney Engeran Cordova, Senior Director, Public Health Division for AHF said. "This is why it is such welcome news that Tinder will add a Health Safety section with a link to Healthvana, making it easier for people to find testing locations through an easily accessible, modern platform." Bastani also thinks Tinder having added the Health Safety section was imperative.

"Dating apps are amazing," Bastani tells Bustle. "They have helped people meet more easily and faster than ever — it's amplified our ability to connect. That same amplification could very well be leading to the rise in infections that we're seeing as of the last few years. Many counties, states, and others groups are studying this and will paint a more clear picture of what's going on in the near future. Either way, it's essential for dating apps to help educate their users about their health and where to get services near them — just like Tinder wonderfully did."

However, though the Health Safety section is a great idea, finding it on the Tinder app may take you a minute. Here’s a few screenshots to help you.

2. Then, You'll See “Frequently Asked Questions” At The Top... And Scroll Down...

Finally, You Will Get To Healthvana's HIV And STD Testing Locator Link! Congratulations!

Guess we will see what the future holds. But, in any case, your Sex 101 class for the day is complete.