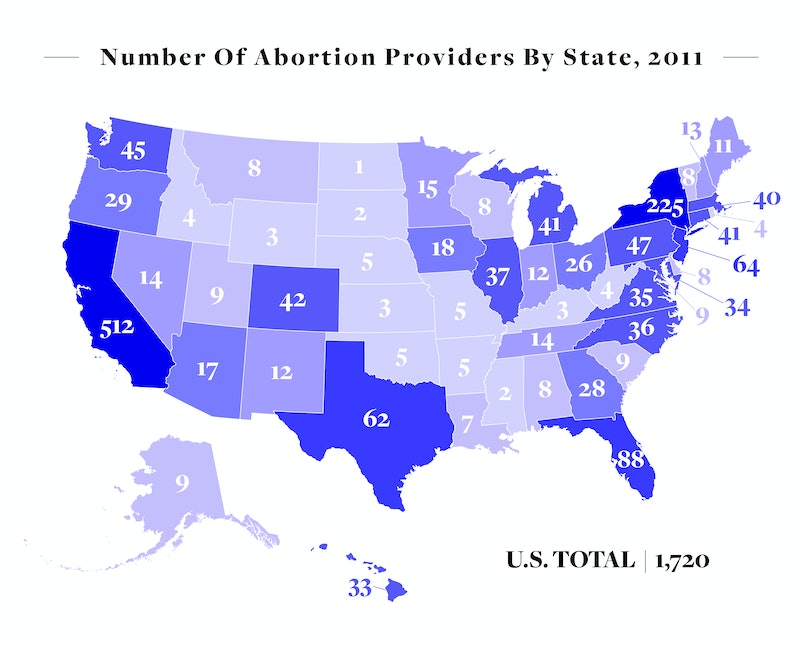 Since the Roe v Wade Supreme Court decision 43 years ago today, the courts have consistently upheld the right to have abortions despite decades of attempts to revoke it. However, nowadays anti-choice activists have a new tactic: Rather than trying to outlaw abortion or overturn Roe v Wade, instead what we've seen over the past few years is a wave of legislation designed to make abortions more difficult to obtain. And as a result, the number of abortion providers by state hasn't grown, or even generally stayed the same — by and large, the numbres have dropped. Clinics are closing or ceasing their abortion coverage all across the country, and these maps show how disturbing the growing problem is.

Over the past few years, a truly staggering amount of anti-abortion legislation has been passed, primarily in state legislatures. In fact, more bills aimed at restricting abortion were passed between 2011 and 2013 than were passed in the entire previous decade. And 2014 and 2015 have only brought on more — which has, naturally, made it increasingly difficult for women to have access to abortions if they want or need it. And that in turn is a problem, not just because it means that, in a practical sense, women are being denied their rights, but also because having access to abortion is correlated with a more positive outlook on life for women. Not having abortion access doesn't stop abortions from happening; it leads to more unsafe and potentially life threatening attempts to self-induce abortion instead.

Today, more than a third of women in the United States live in a county without an abortion provider, according to the Guttmacher Institute. In Texas, for example, anti-abortion laws have left huge swaths of the state without any access to the procedure, with terrifying results.

So how have things played out in the rest of the country? Well, based on information from the Guttmacher Institute, most states have lost at least one abortion provider in recent years. Although the most recent year for which data is available is 2011, the difference between 2008 and 2011 alone is alarming.

New York lost 24 abortion providers between 2008 and 2009 — almost 10 percent of their total. Meanwhile, Oklahoma, Arkansas, and Missouri each only lost one; however, they only each had six to begin with, so the loss represents a decline of over 16 percent, leaving only five abortion clinics serving states that all have upwards of 2.9 million people living in them. Even largely liberal states like California saw declines.

And then, of course, there's the terrifying fact that North Dakota still only has one abortion provider to serve the entire state. In fact, so many states clearly don't have enough providers. Idaho, for instance, has 44 counties, but only had four abortion providers in 2011. Wisconsin has over 5.5 million people but only eight abortion providers. And these states are far from the exception.

Plus, things in most states have only gotten worse since then. Which is scary, because the decline from 2008 to 2011 is scary enough as is.

Women have the legal right to get abortions during their first two trimesters of pregnancy, as ruled by the Supreme Court. The fact that people who disagree are trying to go around the courts to deny women practical access to these rights is just plain wrong and needs to stop. Because things have already gone far enough.