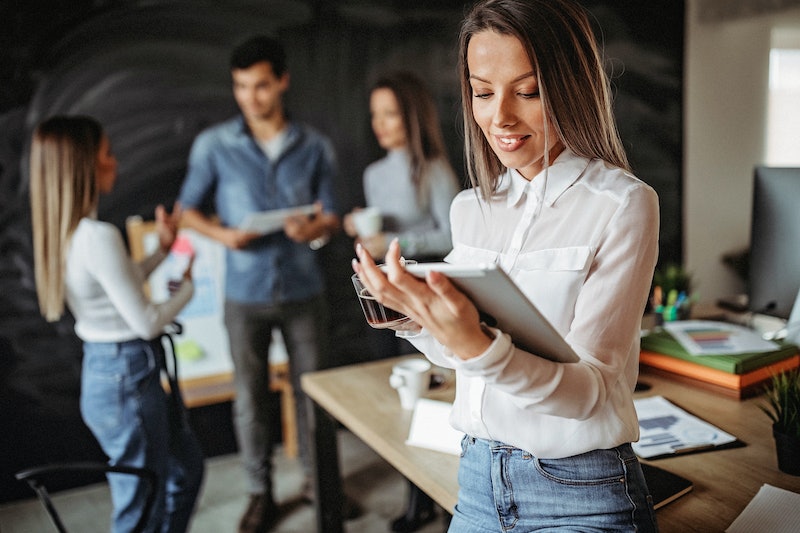 Most women have at some point experienced sexual harassment, belittlement, or accusations of "bossiness" at work, but it's tough to decide how to respond to sexism in the workplace when these responses are often met with even more hostility.

The extent to which you address workplace sexism is always your call. When you have a job to maintain, it's not always worth getting into an argument that could put that job in danger or create a hostile work environment for you. However, it's also important to remember that if someone reacts negatively to being called out, that's not your fault, and you have the right to say something if you believe it's worth the risk.

There are varying forms of sexism in the workplace that might call for different responses. Something said by the guy from sales at the desk next to you, for example, may warrant different treatment than something relayed by your boss or by the intern working under you. Some remarks are best reported to HR, and some unfortunately won't be addressed by higher-ups and are best dealt with yourself.

Whatever form of workplace sexism you're dealing with, here are some ways to respond to it if you feel up to the task.

This includes somebody constantly asking you out, making jokes related to your race, speaking about sexually inappropriate topics, or anything that makes you uncomfortable going into the office.

Some HR departments are better than others, but most realize that workplace harassment — sexual or not — is illegal when "enduring the offensive conduct becomes a condition of continued employment," according to the U.S. Equal Employment Opportunity Commission. So, basically, if you're afraid to come to work because you know a certain person will be there, there's a problem. Even if someone is engaging in conduct not legally considered harassment, if it makes you afraid to come to work, it's HR's job to deal with it.

2. If: Somebody Makes An Offensive Remark About Women...

This could include anything from a joke about women's supposed shortcomings (because it's hilarious when women can't do math, amirite?) to a serious statement about why a woman should not be given an assignment or included in a project.

3. If: Someone Overlooks You In Favor Of Men...

When you're not assigned to a project but all your male coworkers are or you're passed over for a promotion that a mediocre male coworker got, it's hard not to wonder if your gender had something to do with it — and it often does. Women are in fact 15 percent less likely than men to get promotions, according to a LeanIn.org and McKinsey & Co study.

Try: ...Asking What Their Criteria Are

This may not lead superiors to stop overlooking you, but it will make them reflect on why they chose someone else and not you so that, if sexism is to blame, they might realize it on their own. It also holds them accountable: If they say you need to bring in 20 new customers to qualify, they then will feel obliged to promote or include you once you bring in 20 new customers.

4. If: Someone Says You're Being Aggressive...

Given that 84 percent of women in the tech industry have been accused of being too aggressive, according to the survey Elephant in the Valley , it's definitely about more than actually being aggressive. Women get called pushy and bossy for traits that make men good leaders.

Try: ...Explaining Why The Point You're Making Is Important

If you can make your supposed aggression about a group effort or the company at large rather than yourself, people may view you as less pushy and more pragmatic. According to Lean In , women are viewed more favorably when they state their goals in relation to the greater good than when they make them about themselves. I know — you shouldn't have to win the favor of sexists. But if you want or need to, that's one way.

5. If: Someone Offers You A Lower Salary Than Your Male Counterparts...

Women make less than men throughout the country, even for the same work, so if you've compared salaries and it seems like your male coworkers are ahead of you on that front, you're likely not imagining it.

One reason women make less money than men is that they don't ask for more. The National Bureau of Economic Research found that women are less likely than men to negotiate their salaries. Unfortunately, though, there's a good reason behind that, according to an Organizational Behavior and Human Decision Processes study, which found that people view women who negotiate less favorably. When you negotiate, try talking about what you bring to the company and what you will continue to bring. If it still seems like there's a gap between what you and your equivalent male coworkers make, you can also bring that to HR. The Lily Ledbetter Act dictates that women cannot make less than their male counterparts, so your company's salary gap could very well be illegal.

A quick note: If you don't feel comfortable with the people in your company's HR department or you are scared to take things to that level, you can also talk to a manager or mentor that you trust. People in senior positions are usually trained on dealing with legal issues in the workplace and can advise you on the best course of action.