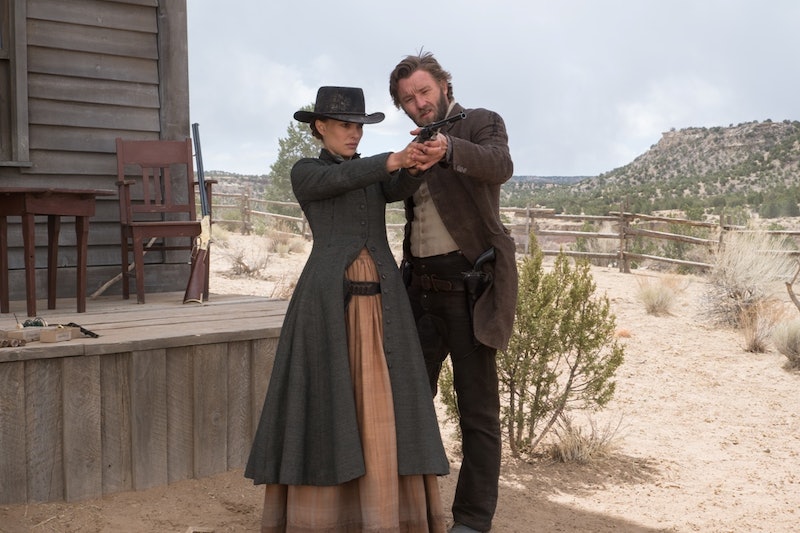 Natalie Portman takes on the classic Western in Jane Got A Gun , her first major release since Thor: The Dark World (2013). Prior to the film's release, it was plagued with behind-the-scenes drama sure to become Hollywood folklore, with a change in director and multiple casting shakeups. Portman, however, was always committed to star in the film, and it's not hard to see why the actress stuck so fiercely to the role in what some deemed a doomed production. A short summary of the film doesn't read particularly feminist: a woman must go to her ex-lover for help when a gang comes after her outlaw husband. This log line doesn't so much scream independent woman as it does damsel in distress, and it's this contradiction that makes the film so interesting. Jane Got A Gun actually embraces the damsel in distress stereotype in order to create a strong female heroine.

In Jane Got A Gun, Portman plays Jane Hammond, a strong-willed mother married to a kind hearted outlaw in post-Civil War America. Her life is thrown into chaos when her husband, Bill, returns to their solitary home in the New Mexico territory riddled with bullet holes — the Bishop Boys are coming for them. Alone and desperate for help, Jane decides to ride away to get help in the form of her ex-fiancé, Dan Frost — "I need a gunslinger," she tells him. There's a whole romantic triangle subplot I won't spoil for you here, but the basic construction of a woman going to her ex to beg for help to protect her from bad guys is classic Western damsel in distress.

Then again, unlike classic damsel in distress stories, Dan doesn't just magically appear in town and stumble upon a woman who needs rescuing. Jane actively recruits him, seeks him out in the middle of nowhere and pays him for his services. He's not exactly a knight in shining armor protecting her out of the kindness of his heart, which makes Jane not exactly a damsel in distress. Yes, she needs a man's help to fight the Bishop Boys, but she is also an active participant in her own protection. She helps plant makeshift land mines along her property and carries a gun or two of her own. She's not afraid to kill to protect herself and her husband. Realistically, however, she does need some help.

After all, the Bishop Boys are a gang of criminals — at least a dozen or so are coming after her — and she's just one woman. The threat extends farther than just life or death, as the film later explains, the Bishop Boys traffic in women, making the threat of enslavement and rape an ever-present possibility for Jane. By making Jane a woman in need of aid, the filmmakers stay true to the limitations of the period in which the film is set. Jane's circumstances as a woman, essentially alone, living out in New Mexico territory with her injured husband, would likely impede her ability to take down a gang of ruthless criminals. Unless she was some kind of larger-than-life superhero (think Black Widow but in the 1870s and in pioneer dress), she was going to need some assistance. To ensure that Jane is a real feminist hero that audiences can relate to, the filmmakers had to make her somewhat of a damsel in distress. Otherwise, her triumph wouldn't ring true to the period in which she lives when it finally comes around.

As the calls for better female roles onscreen grow louder, the knee-jerk reaction of many viewers and filmmakers is to erase the sexist tropes of past films. And I get it. Common sense dictates that the old damsel in distress trope should be one of the first to go. And yet, Jane Got A Gun makes a good case for why we shouldn't abandon it altogether.

Where Jane Got A Gun succeeds is in reclaiming and re-framing the damsel in distress trope. And I hope more films take notice.