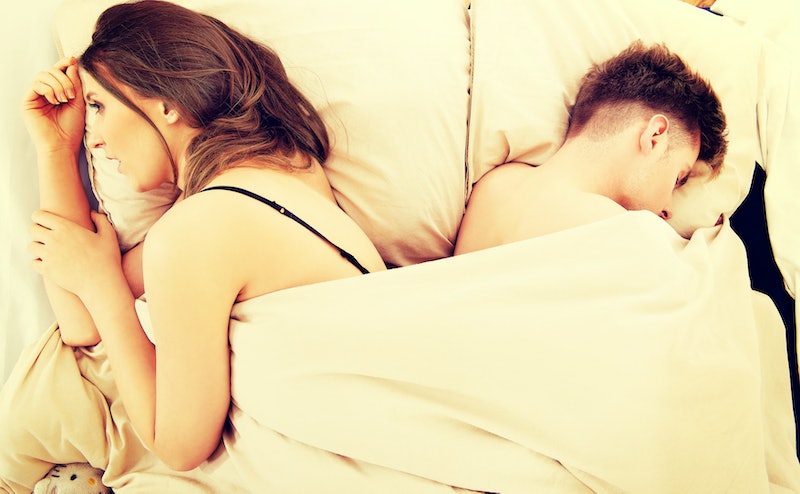 Intimacy is one of the most important components to a healthy relationship, but should you break up if the sex is bad? Sex isn’t just a display of love and intimacy, but binds two people and makes them feel closer, both physically and emotionally. And while companionship is definitely a highlight in a relationship, too, without sex, couples can feel distant and each one can suffer in their own ways, because sex is really beneficial to not just the relationship, but the human body, as a whole.

While I contend that being bad in bed is subjective, that doesn’t change the fact that if you think your partner is bad in bed, you need to decide whether or not you want to stay in that relationship. It’s one thing to be a bad kisser, something that you can hopefully change with a couple lessons, but bad sex is an entirely different category. If you have a partner who doesn’t realize the importance of communicating in the bedroom, then trying to fix the bad sex can be tough — you just end up with constant bad sex and you don’t know what to do… so do stop having sex? Do you leave them?

I asked 15 women their thoughts on whether or not bad sex should lead to a breakup. Here’s what they had to say.

Not if they're cool with you sleeping with other people! Hey, you can't get everything from any one person. Shrug.

No, because men are dickheads and if I find a good one, I'm not dumping him just because he's not perfect in every way. You just gotta talk it out, they can be trained quite easily in bed. In life, not so much.

It really depends WHY it's bad. Is it bad because there is no spark, or because you two want DRASTICALLY different things in the sack? Is it because s/he doesn't seem overly interested in whether or not you're having a good time? Any of those, then YES. However, if the person is just inexperienced, but interested in learning or perhaps having health issues, then no, that can be worked through.

Yes, because it's usually bad because he's learned to be a greedy, selfish lover who takes his orgasm but doesn't have the patience for foreplay or to try to do anything for you. You can say, ‘don't do this’ or ‘do that,’ but I've found paying attention to someone else's body language and physical cues can't be taught. I've also never had much luck re-training bad kissers.

YES you need to break up if the sex is bad, unless you have no sex drive and it doesn't matter to you. But if you have any drive at all, you will go somewhere else for good sex if it's not good with your partner. I've been there!

If there seems to be a possibility of him getting to know you and being better at it, it’s not a dealbreaker. But if it's really, really bad and no connection at all, then no chance. I’m out of there.

I’m done with bad sex. I understand that not everyone can be great in bed, but if it’s bad and it doesn’t look like it has a chance to get any better, then I’ll pass. I have vibrators so I’m doing just fine.

I’ve only ever ended ONE relationship in my life and it was not over sex ― all the other relationships were ended by the guy or the girl I was dating. So I don't have a real-life anecdote but I feel like while sex is SUPER important to me for a variety of reasons, it's not as important as having someone that I connect with emotionally and actually like spending time with outside the bedroom.

I feel like if the connection is good, then the sex will be good no matter what. To me bad sex means no connection, so I think it would be something to break up over.

No, because if you have a good relationship you should be able to talk to one another and tell each other the dirty deeds you wish for. Communication is key here; sex is wonderful if you are able to tell your partner what you want and need.

I think how bad is the question here. So bad that there’s no hope of it ever getting better? Or just a little bad that it’s fixable? If it’s the latter, then breaking up isn’t necessary. If it’s the former, then possibly. But I do believe people need to be given more than one chance to prove themselves.

If the sex is bad, but I really like the person, I would take responsibility for my contribution to the sex pot. Communication is important! If the person is worth it (i.e. not a total loser, jerk or lazy) I would try to open the conversation up with, 'is there anything you've always wanted to try?' and let them know that I'm very open to exploring new and different positions and approaches. Bad rhythm? Put on some music and take control. Put your hands on his/her hips and help it along. Got a dead fish? Encourage him or her to let you know when they're turned on (tell them what feels good! Lead by example.) Rather than identifying a problem and walking away, get in there and do some work.

If you have done all you can, and the person is just not motivated or unwilling to open up, it might be time to move on. Sexual chemistry is important to me. It's worth working at it, but if it's just not there, I don't think I could stay.

I’d like to say no, because there should be more to a relationship than sex, but I’d be lying to myself. If the sex is bad and communication hasn’t helped, then that’s a perfect reason to end it. Maybe I’m just shallow, but I deserve good sex. End of story.

I would definitely break up over bad sex. I think that 'meh' sex is improvable but if you've been trying it for a while (like a couple months) and it's still not working, than it's not likely to get better. I prescribe to the Dan Savage school of thought on this one: So many long term relationships end over 'just' sex. It doesn't do anyone any good to pretend like sex doesn't matter or matters less than other things in a romantic relationship.

Not just because the sex is bad. But if it's bad and they refuse to be open to suggestions when delivered considerately, or try something new, or admit there's a problem. Then it reveals a personality type that's probably difficult to be with.

Want more of Bustle's Sex and Relationships coverage? Check out our video on sex positions for small penises?