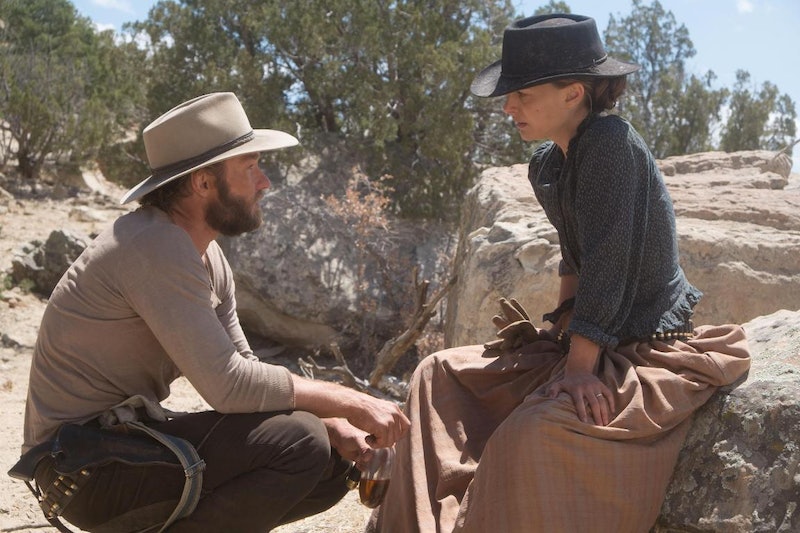 Jane Got A Gun isn't just a movie about a gun-slinging, butt-kicking Natalie Portman in the Wild West, despite what the trailer might have you believe. As a new feminist take on the classic Western, Jane Got A Gun doesn't just take on traditional Hollywood gender roles, it also takes on the daunting task of portraying a sexual assault survivor, without ever really identifying the character as such. When the audience meets Jane (Portman), she has survived being raped after being forced into prostitution, but that fact isn't revealed until well into the movie. Jane Got A Gun portrays Jane as shaped by her sexual assault, but not defined by it — a fact that makes it worth discussing.

Jane Got A Gun takes place in 1870s New Mexico territory, where Jane lives with her husband, reformed outlaw Bill Hammond, and their young daughter, Katie. After Bill returns home full of bullets in his back, Jane must go to her ex-fiancé, Dan, for help to defend her and her husband against the Bishop Boys, a gang of outlaws coming after them. It is later revealed that Jane had previously (Spoiler Alert) been taken by the Bishop Boys and forced into sexual slavery in a whorehouse (this is the Wild West).

It could be said that Jane's supposed multiple rapes are put forth as little more than a plot twist, as seen all too often on television. The construction of the film, which slowly reveals Jane and Dan's backstory through flashbacks, lends itself to this critique. The plot line could easily be interpreted as meant to add color to Jane's past and explain how she could leave her fiancé behind for another man. However, it's worth noting that Jane's rape (or rapes) is not treated as salacious stories to shock the audience. We don't witness the actual act, only the aftermath, and even then the "plot twist" aspect of the the sexual assault is overshadowed by Jane learning that her young daughter has been killed.

What makes Jane Got A Gun's portrayal or rape intriguing is not how the filmmakers depict the act. What is interesting about the decision to make Jane a survivor of sexual assault is how that plot point affects the film. Her rape isn't used as a catalyst for some male character development, though it does help Dan understand Jane's motives for giving up on their engagement. Nor is it depicted as a trauma that defines Jane going forward. If anything, Jane is defined by her struggles as a single mother, not sexual assault. Case in point: right after Jane is raped, she is saved by Bill, who broke ties with the Bishop Boys by breaking her out, but she doesn't start crying until Bill confirms that her daughter is dead. Later, when Jane shoots and kills the man who forced her to suffer abuse, it is because he has her daughter, not a need for revenge.

It's significant that Jane's assault doesn't leave her in a puddle of her own tears, not that there would be anything at all wrong with that. It's just so different from how the typical rape victim is depicted in film or television. Generally, the expectation of a rape survivor in any filmed narrative is for that character to be emotionally damaged, crying and helpless, or desperate for revenge. Jane Got A Gun works hard not to fall back on those traditional patterns.

One thing that has been made clear to me over years of watching Law & Order: SVU is that rape victims react to their assault in many different ways. There is no right way and no wrong way. There are, however, many right ways and wrong ways to portray rape and rape victims. In recent years, the topic has become one that is used to electrify television series and boost magazine sales. Popular television shows like Game of Thrones, The Newsroom, Downton Abbey and Nashville have all featured rape story lines with varying levels of success — as strange as it seems to use that word in conjunction with a horrifying storyline. Though its ratings have ballooned, GoT's critics have yet to get over the very valid attacks on how the series handled one character's rape last season, and The Newsroom got a beating in the press for how it appeared to condone the dismissing of a woman's alleged assault. There are, of course, some onscreen treatments of sexual assault that have been well received like Netflix's Jessica Jones , but those are few and far between.

The main issue a lot of viewers have with how rape is portrayed onscreen has to do with the aftermath. Does the show or film take the experience of a sexual assault survivor seriously? Or is rape dismissed as a plot device, the "victim" character left under developed and forced into the next plot twist? Jane Got A Gun avoids criticism on this front by making the rape take place in a flashback. It's now six or seven years later, and Jane has clearly moved on from the traumatic experience. It informs her character, but the audience isn't privy to how, exactly. And, here's the thing: we don't need to be.

Jane's journey is her own, and by choosing not to let the audience in on the aftermath of her sexual assault, the filmmakers chose not to exploit their main character. Regardless of other problems the film might have, it's certainly a step in the right direction.