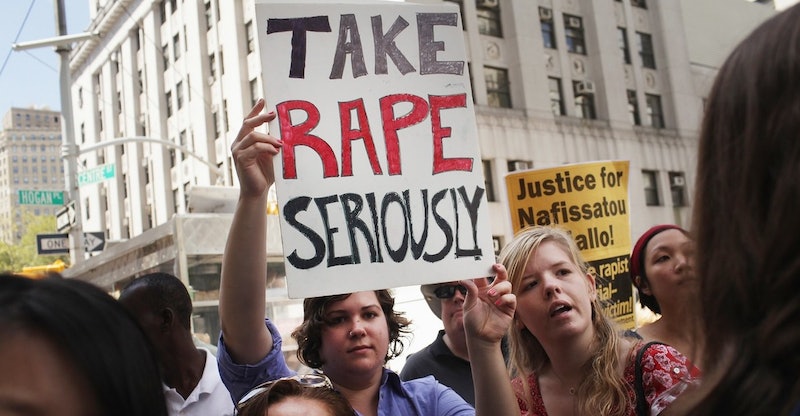 We learn everything we know from television. Well, maybe not everything — if we did, I may have passed the AP Calculus test in High School — but we, as a society, learn a hell of a lot about humans, how they interact, and what sort of rules make sense for those interactions. And in 2014, television was teaching some strange lessons about what it means to give consent, what rape is, and how important the discussion surrounding sexual assault really is.

And this is a huge problem, considering the year we've seen on college campuses and at Lena Dunham's front door. In a year when campus rape and the subsequent denial by many great institutions have shaken this country until its last leaves fell to the ground, allowing TV to stand in a wealth of uncertainty on the topic of sexual assault is completely unacceptable.

Now, this is not to say that our greater society should look to television for the stamp of approval, but television has proven that its impact is significant. When Mindy Kaling says "asking sucks," or when a Game of Thrones actor blurs the definition of rape, they are sending a message, whether or not they intend to do so. Television often serves as a representation of society — in a strange, overly-dramatic, and sometimes violent way — but especially in the wake of what the internet dubbed The Golden Age of Television, we learned to expect more careful TV. We came to expect more from the small screen, in general.

Unfortunately, some of our most trusted television voices smudged the understanding of sexual assault and while "it's just TV," the marring of the definition of consent and of rape is something we simply can't afford.

Mindy spends the whole episode trying to learn crazy sex moves (typical sitcom fare, I guess), but in the end, Danny admits that he didn't slip, he was just "trying something." At first, Mindy asks him to just run that stuff by her next time (which is great, because consent is important in a loving relationship too), but eventually, the conversation ends on rather uncomfortable note: both Mindy and Danny agree that "asking sucks," the idea being that spontaneous sex is more fun and that consent is so darn stuffy.

Hey, spontaneous sex is fun, but there's a difference between spontaneity and dismissal of what should be safe sexual practices. Sorry, Mindy "Asking Sucks" Lahiri, but getting a quick "Is this OK?" "Yeah!" in there before lift-off isn't a bummer when you're in a relationship; it's what prevents two people who love each other from hurting each other by pushing further than the one partner is willing. Period.

Anyone who saw the last season of Game of Thrones probably remembers feeling ill at one particular moment — and I'm talking about a season that includes Oberin having his head squished like a Gusher fruit snack, Tywin Lannister getting an arrow in the bowels, and King Joffrey going all purple, putrid, and bloaty with some poison. But the moment in question is unmistakable: After Joffrey is killed, Jamie Lannister — who's been continually rebuffed by his sister-lover Cersei — loses it and rapes Cersei up against their son's grave after months of the series convincing us that Jamie is such an amazing guy.

And while this kind of brutality is typical of GoT — and something George R.R. Martin insists is necessary to truly depict the depravity of Westeros (which is a whole other can of worms) — it was the aftermath and the words of the actor who lays Jamie, Nikolaj Coster-Waldau, that brought it all crashing down. When asked about the scene, Coster-Waldau told The Daily Beast:

Yes, and no. There are moments where she gives in, and moments where she pushes him away. But it’s not pretty. It’s going to be interesting what people think about it ... There is significance in that scene, and it comes straight from the books — it’s George R.R. Martin’s mind at play. It took me a while to wrap my head around it, because I think that, for some people, it’s just going to look like rape. The intention is that it’s not just that; it’s about two people who’ve had this connection for so many years, and much of it is physical, and much of it has had to be kept secret, and this is almost the last thing left now. It’s him trying to force her back and make him whole again because of his stupid hand.

For some context, Martin also maintained that "in the books" the scene was somewhat consensual, but fraught, and that the HBO show's creators changed the scene for television. But if we assume Martin is on point here, that means Coster-Waldau simply doesn't get it. Here's the thing: no matter how much love is behind the action, forcing someone "back" to "make him whole again" is still rape. If you have to force your sexual partner into anything, that person is not willing.

This moment was a tad more subtle than the others, but it was perplexing nonetheless. After months of pining after Jimmy Darling (Evan Peters), aka Lobster Boy, conjoined twin Dot finally confesses her love for him before offering up her body to the Freak Show stud. The problem is that Dot shares a body with Bette, her conjoined twin and someone who is clearly not in love with Jimmy. It opens up a strange question: where does consent come into play with a situation like this?

On one hand, I guess Bette is cool with sharing her body with her sister's could-be lover. But on the other hand, she says she'll just close her eyes and pretend she's doing something else. She could be offering privacy, but there's also a tinge of an "I'll just lie here and take it" attitude that provides a wash of creepiness. But if creepiness is AHS' bread and butter, shouldn't this be a non-issue? Well, not exactly.

The problem with this depiction of consent, stacked up against the other problematic depictions, is that it almost devalues the preciousness of one's body. If Bette is so flip about her own sexual organs, practically saying "Sure, sis, you can have 'em tonight" the way you might lend your neighbor a bike, and relinquishing her right to govern what goes on down under like it's nothing, it sends a message that while it's not her cup of tea, letting this guy have sex with her is no big deal.

Now granted, very few people are conjoined to their twin sister and faced with such a difficult landscape to navigate, but sex should be given with hearty consent, and not simply shrugged off as "I guess you can stick it in while I read a book and pretend it's not happening." Sure, this AHS situation isn't rape, but it perpetuates the notion that it's no big deal for a woman to have intercourse when she does not want to do so, and that's where things get dangerous and weigh heavily on the understanding of true consent.

All that being said, knowing Ryan Murphy, it's possible that Murphy and Co. meant to highlight the discomfort in this sexual situation. After all, what's more horrific than the dismissal of consent?

The Big One: The Newsroom Hits Too Close To Home

Finally, we've come to the big one: The moment at which the real world issues surrounding consent and sexual assault came face-to-face with television's issues with consent and sexual assault. In one of its final episodes, The Newsroom saw a plot about a rape victim from Princeton who claims to have been raped at a party and who has created an anonymous website to allow women to report rapes like hers, which couldn't help but evoke comparisons to Rolling Stone' s controversial story about an alleged rape at the University of Virginia.

Initially, Don (Thomas Sadowski) works to get the student, Mary, on ACN to debate her alleged attacker. This is painted as a greedy move by the folks holding the ACN purse strings and to some extent that's right: bringing these two young people into contact on television would probably hurt both parties. Don notes that when he eventually convinces Mary not to attend the debate, but also throws in the accusation that her website could ruin the reputation of an innocent man some day. When Mary still wants to go on with the debate, Don pulls shenanigans and gets the segment pulled, which we are supposed to see as a victory for journalism.

Sure, he stopped Mary from being thrown to the wolves on Twitter and throughout the media, but he also silenced her story. He didn't find a way to give her more of a voice in a better venue, he simply brushed the story under the rug the way a lazy kid shoves his messy room under his bed. (For the record, Newsroom writer Alena Smith posted a now-deleted tweet claiming that she suggested they dump the storyline, but that she was kicked out of the writers' room for her efforts.) The episode didn't solve anything and it cast perhaps more doubt on rape victims, which is definitely not what journalism, or society in general, needs.

At a time when we can see 15-plus women accuse a celebrity of assault and the world at large still goes, "Well, maybe they're all lying," we can't afford for our entertainment to continually reinforce doubt and undermine the truth of sexual assault. Rape culture apologists are out there. There are law enforcement officials publicly shaming victims in court. And believe it or not, a better understanding on television could lead to a better understanding in the real world.

Here's hoping that in 2015, television tries a bit harder.

More like this
15 Photos Of The 'House Of The Dragon' Cast At The Show's UK Premiere
By Radhika Menon
Gwendoline Christie’s Partner Is Part Of Royal Family History
By Parry Ernsberger and Sophie McEvoy
We’ve All Had Bad Sex. Nona Willis Aronowitz Is Talking About It.
By Sophia Benoit
Jennifer Coolidge Got A Lot Of “Action” Thanks To 'American Pie'
By Catharina Cheung
Get Even More From Bustle — Sign Up For The Newsletter