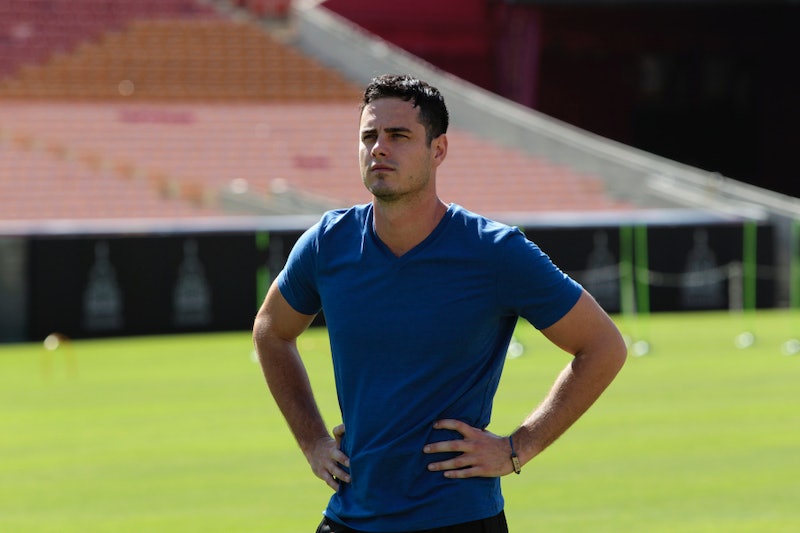 When you put 25+ women in a house and make them compete for the heart of the same man, there’s bound to be some drama with a capital D. The Bachelor has made its fortune off of this formula — the women (and the men when it’s a season of The Bachelorette) pretty much constantly fight with one another just so one looks better in the eyes of the beholder Bachelor or Bachelorette. Well, people, Ben Higgins is having none of that insecurity, OK? His Season 20 of The Bachelor is where the Bachelor contestant begging for compliments stops, because Ben is definitely putting an end to it.

It’s only Week 4 of The Bachelor, and many of the women in the house are already at full-tilt madness. Nearly everything each one says or does makes them insecure, and so they come running to Ben for validation that they’re not stupid idiots every chance that they get. The best example of the night? After an embarrassing turn at a Las Vegas talent show in which she jumped out of a cake (don’t ask), Olivia came crawling back to Ben basically looking for reassurance that she wasn’t a loser or something because she jumped out of a cake. As if anyone really cared but her. Since Olivia does this on a weekly basis, Ben actually got annoyed with her, which is something we hadn’t seen before. Ben told Olivia that there was no need to apologize for everything she does because he likes her for who she is. (Although the tone of his voice made it seem a little more like "I like you for who you are for now as long as you stop this ASAP.)

Ben also had a variation of this conversation with Jubilee on Monday, because Jubilee feels that’s she’s “too complicated” to date. I mean, she has to work through that on her own, and The Bachelor might not be the place to do it. Ben is no therapist, ladies, and he can’t help you with all of these issues of self-loathing. All of this is obviously grating on Ben, who is just here to find his future wife, you guys. Leave him be.

Although, to be fair, everyone thought it was charming when Ben called himself unlovable, so maybe he needs to take some of his own advice.

Either way, it was nice to see Ben take a stance on things instead of just blindly letting the women continually beg for compliments. He likes these women and he's not going to let them disparage themselves — confidence is key on a show like this and in life! Hopefully Olivia and Jubilee will see that sooner rather than later.