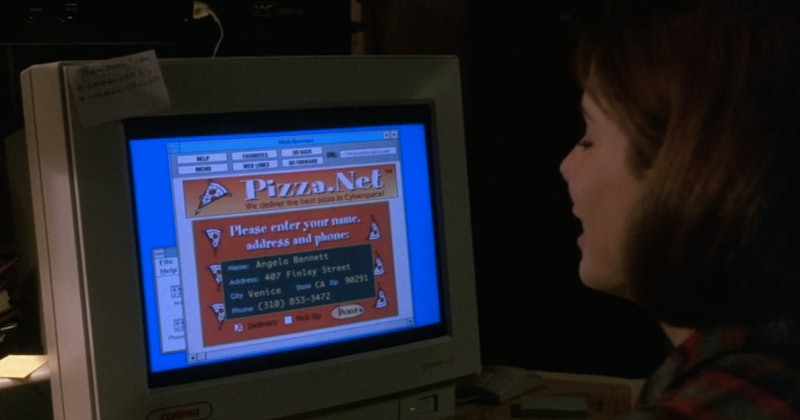 When you think Sandra Bullock movies, you inevitably think of sleepover standards like Miss Congeniality , or maybe the more-recent Oscar-sweeping film Gravity . Chances are you do not think of 1995’s technology-based thriller The Net, and there’s a pretty good reason for that. First of all, it was made in 1995 and is not Clueless, Empire Records, or The Lion King (so three strikes there). But more than that it’s awkwardly outdated and super hard to relate to in a modern context... and that’s what makes it hilarious to watch now.

To gloss over the plot, Angela Bennett is a socially reclusive tech-wizard who gets handed the wroooong floppy disk. There’s apparently a computer conspiracy that she’s stumbled upon, and this group of cyberterrorists intercept her identity and force her to run for her life. I don’t know, it’s very confusing, and honestly I’m distracted mainly by the oversized pieces of equipment used throughout the film.

So at risk of exposing how young (peak millennial here) and un-tech savvy I am (you know, for a digital news writer), I catalogued all the outdated technology moments in The Net for your amusement. And, yes, that includes calling the Internet, “the net.” There’s a reason that name never stuck...

1. "For Every Buckle-Down Hour You Give Algebra Two, You Get Two With Quality Time With Nintendo And Sega."

Guys, quality time with Sega — it's a deal you can't pass up.

2. This Is Probably A Top-Of-The-Line Flip Phone

Which is hilarious because the last time I remember having a flip phone it was a Razr... and it was also 2010.

So I Googled this and the first result came up in Arabic (or something indistinguishable), the next few assumed listed a city in Germany and a furniture company, and the image search just assumed I misspelled "radish." So um, this is either not-a-real thing or so outmoded that Google won't even recognize it.

First of all, look at all the files it takes to play one of the OG Wolfenstein games, and second of all I haven't seen these little boxes since second grade.

They're an essential part of the plot and yet I think anyone born after 2000 wouldn't even know what the hell this is.

Or something like that, back in the day my home PC would have all sorts of viruses and loading problems that some tech guy would suggest fixing by "defragging your files" or something. Ultimately it did nothing, but the good news is with a Macbook I only have technical issues if I spill coffee-and-kahlua on my keyboard (and that's only happened... once).

8. Having A Home Phone

Something that just isn't a thing if you're under 35-years-old.

9. The Idea That Ordering Pizza Online Is A Hilarious Novelty

To begin with, lulz forever at "pizza.net." But more than that, I'm not really sure if this was a real and tangible thing back in 1995. I'm gonna go with "Nah."

At least it doesn't have the instructions box where she could type in "draw a picture of a kitten in mittens on the box." Then this would be too much like our modern times.

10. Chatrooms For People That Are Exceptionally Lonely

Which I saw with zero judgment because I spent ages 9 through 13 in Chatrooms versus... in the observable universe. I'm sure they still exist, but I fear whoever's still using them.

11. Usernames That Are Exceedingly Simple

Remember when there were only like three people on the Internet and you didn't have to add an absurd amount of numbers and strategic wordplay to find a not-taken username?

12. Being Able To Book A Flight Without Having An Aneurysm

Again, I'm not even sure if this was possible in 1995 (it certainly wasn't a commonplace practice) but it seems ridiculous that you could just make flight reservations without my dad simultaneously on the phone trying to cash in miles from an aborted Hawaii trip three years back.

Are you effing kidding me.

Honestly if it takes more than 10 seconds for a web page to load I start making a frantic call to Time Warner.

I don't think these are a thing, right?

15. This Humongous Black Box Is Her "Portable" Computer

It only weighs as much as a small child.

She says about the other clunky, overweight, backpack-monopolizing piece of dinosaur technology.

17. "We're Sitting On The Most Perfect Beach In The World... And All We Can Think About Is Where—" "Where Can l Hook Up My Modem?"

18. The Idea That The Guy You've Been Chatting With Online Is Actually A Raging Psychopath Who's Been Stalking You

Well, I mean, this could still be pretty much true, but you at least visually know what you're swiping right on.

19. These Kid Pix Graphics That Show Up On The LAPD's Screen

Son, you're driving, get a bluetooth or something.

I forget, was the only option at one point either closed and... not closed?

So sleek, so sophisticated.

24. Reporters Using Tape Recorders Instead Of That One $10 iPhone App

More to the point, cassette tape recorders, because the only people using cassettes these days are Brooklyn musicians releasing their indie-pop softgaze grunge debut EP (reference: my immediate friends circle).

26. Not A Valid Electronic Mail Address?