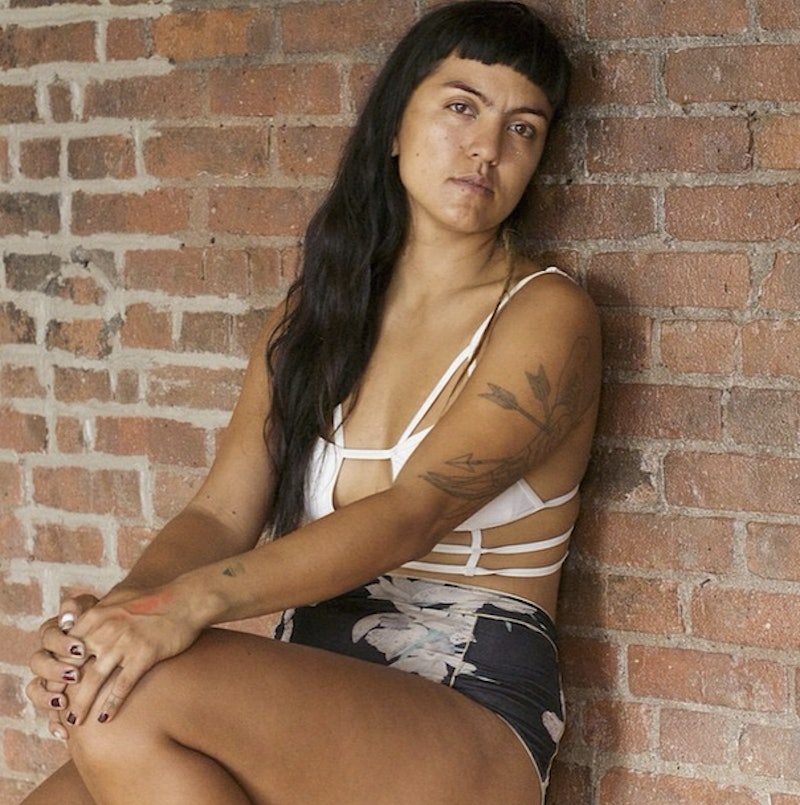 My friend Amelia sends me a video via Facebook, telling me about an exciting project she thinks will resonate with me. I open the link and press play. The screen is black; two voices are heard. Female voices. The first asks: "Let's hear about how you feel about doing this?" and the second replies: "I think it is wonderful to take away the jacket of the book so you can just get an essence of the bottom line, for everybody," she annunciates, "Especially women. I think there's just an epidemic of poor body image..." The blackness disperses, and the queenly image of actress and model Jacky O'Shaughnessy, with her ethereal naturally white hair and geisha-mouth emerges. From behind the camera, mother and daughter (and creators of the What's Underneath project) Elisa Goodkin and Lily Mandelbaum ask Jacky a series of intimate questions — gently, as over a coffee with an old friend. She openly reveals details of her relationship with her outward visual image, her body, and her style. She responds with such articulate clarity, removing an item of clothing with each confession, as a metamorphic striptease — until she sits there, on the high white stool in matching everyday lingerie. She is lioness-like in her vulnerability: Simultaneously relatable and a goddess.

I am instantly in love.

I've noticed — as a woman with active interest in the feminine experience and general peruser of the Internet/living being in the 21st century — that there is a growing movement of women out there redefining female beauty and body image on their own terms, from an intimate and internal place. From the viral #effyourbeautystandards hashtag started by plus-size model Tess Munster, to Lena Dunham's naked body's regular appearance on hit TV show Girls, a revolution is afoot, aided by the omnipotent being we call "The Internet."

After centuries of body beautiful and fashion trends dictating the flavor of the month of what is deemed an attractive woman, it seems we are sick and tired of seeking a beauty standard that is not our own. And perhaps we are finally through. As Jacky O'Shaughnessy puts it in her video interview for What's Underneath: "I finally stood there...and said: 'When are you going to be okay?! You've been spending almost 50 years trying to get thin enough, trying not to have cellulite, ankles that swell; when are you going to be okay?' And I finally said 'Today! You're going to be okay today!'"

Movements like the What's Underneath project, herself.com, and the Kickstarter-funded Embrace documentary demonstrate that we are okay today, just as we are. Glowingly attractive in our eloquent expression, our style, our diverse and intricately different bodies. Today. Herself.com, as defined by its creator and actress Caitlin Stasey as "a gesture to women for women by women; a chance to witness the female form in all its honesty...encouraging solidarity," is one of my favorite components of this exciting and intelligent uprising. In a similar vein to the What's Underneath project, Herself is a series of intimate interviews with women accompanied by nude photos of them. An ode to female elegance and courageous vulnerability; a page three antidote.

John Berger famously wrote in his book Ways of Seeing:

"Women appear... watch themselves being looked at. This determines not only most relations between men and women but also the relation of women to themselves. The surveyor of woman in herself is male: The surveyed female. Thus she turns herself into an object — and most particularly an object of vision: A sight."

For years, the vision of feminine beauty has only been presented as refracted through the male gaze in the mainstream because of our historical patriarchy. Personally, I don't think the male gaze in itself is damaging, but the fact that this is the predominate way female beauty has been presented is. As with everything, I feel diversity is key. Beauty is in the eye of the beholder. And the male gaze is not inherently destructive; it is a valid way of seeing. It only becomes something threatening and violent when taken as the only way of seeing.

Although we have a long way to go, there has never been a better time to be a woman — especially a creative woman — than now, at least in most of the developed world. Our freedom of expression has only been amplified by social media and the culture of sharing on the Internet. Everyday women and famous women alike have access to a megaphone — a soapbox of epic proportions — if they have access to Wi-Fi and a bit of streetsmarts.com. Consequently, a movement of person-centric expressions of beauty and women defining beauty on their own terms is growing larger and stronger. Fashion photographer Sacha Van Dorssen said: "Men always see a showcase, a shop window, the way a woman shows herself to the outside world. A man can look at it, but not in it — that's the difference."

For this reason, I am a defender of the often hated-on selfie. As up-and-coming photographer and self-confessed selfie-addict Lindsay Bottos puts it: “The act of women taking selfies is inherently feminist, especially in a society that tries so hard to tell women that our bodies are projects to be worked on and a society that profits off of the insecurities that it perpetuates. Selfies are like a ‘f*ck you’ to all of that; they declare that ‘hey, I look awesome today and I want to share that with everyone’ and that’s pretty revolutionary.” The Internet gives everyone the chance to present their beauty as valid, and this is a pretty powerful tool for women.

Of course, it's not a new thing that women are projecting their personal thoughts on beauty, offering a new perspective to cultural beauty ideals and putting their own bodies up as objects to be admired on their terms for their visual and intelligent merits. The Comtesse de Castiglione was dressing up in fancy costumes for her own self-directed photo shoots as early as the 1800s, and who could forget Frida Kahlo's heartbreakingly poignant self-portraits? Or Sylvia Plath's confessional poetry? Or Anais Nin's delicate erotica? Not everyone is blessed with artistic prowess, though, or buckets of Italian gold with which to commission top [tintype] photographers to capture you dressed in layers of silk as your favorite literary heroine. Most girls these days do, however, have access to the wonderful world of the Internet: A place where every woman has a voice, and a looking glass to shine her beauty into the world.

More like this
TikTok's “Clean Girl Aesthetic” Isn't As Inclusive As You Think
By Tomi Otekunrin
How To Fight For Reproductive Rights, Based On How Much Time You Have
By Courtney Young
23 Times Meghan Markle Dressed Just Like Princess Diana
By Bustle UK
42 Black Owned Fashion & Beauty Brands To Support Today & Always
By Mekita Rivas, Shea Simmons, Kui Mwai and Dominique Norman
Get Even More From Bustle — Sign Up For The Newsletter