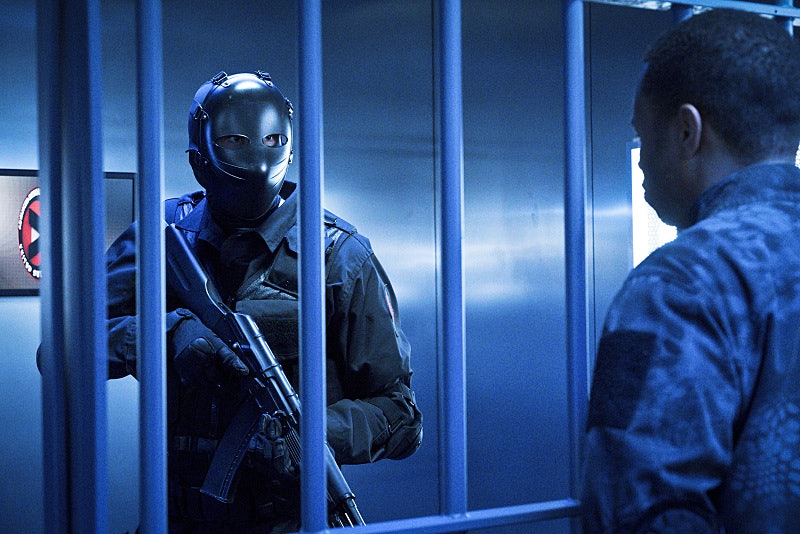 It's a well known fact by now that Star City is pretty much a magnet for trouble, so it should come as no surprise that another dangerous criminal organization known as Shadowspire will be making itself known on Arrow during Wednesday night's episode "A.W.O.L." So what exactly is Shadowspire, you may ask? In regards to its DC Comics origins, Shadowspire is a terrorist organization run by the Chief of Shadows and Nazi super-villain, Baron Blitzkrieg, though on Arrow we know him better as Baron Reiter, played by Jimmy Akingbola, who held Oliver captive during his days on the island of Lian Yu. We've seen him quite a bit throughout Oliver's Season 4 flashbacks and in comparison to his mercenary Conklin (who's had it out for Oliver since Day 1), he seemed like an OK guy. But like with most things on this show, looks can be very deceiving.

Though executive producer Marc Guggenheim confirmed to Entertainment Weekly that Reiter "is not going to become Baron Blitzkreig in the show," that doesn't mean he too won't have evil intentions. To his followers, Reiter's sole purpose in being on the island centers around creating The Slam Drug and the profits he hopes to make from it. However, his interests lie far beyond that of money. He believes that magic exists somewhere on the island that could make him more powerful beyond measure. This was first hinted at during his interrogation with Constantine and again when he stopped Oliver from being whipped after he noticed the tattoo on his torso started glowing when the Orb of Horus was nearby. Basically, this dude is really into the idea of the supernatural and could eventually help to explain how Damien Darhk came to possess his so-called powers.

You see, Oliver isn't the only one who has a connection to Shadowspire. According to this week's episode synopsis, Diggle and his brother Andy will be forced to trust each other "when an enemy of their wartime past, an agent of the criminal organization Shadowspire, pays a visit to Star City." We already know that Andy has been an active member of Darhk's H.I.V.E. organization, so if he's somehow affiliated with Shadowspire as well, that makes me feel like the two must somehow be connected. And according to a recent interview TVGuide.com had with actor David Ramsey, who plays Diggle, it all leads back to Damien Darhk.

While I don't think that Darhk qualifies as a metahuman, he does seem to possess some abilities that at least appear magical in nature. (Like stopping Oliver's arrows and having that weird affect on Thea's bloodlust.) Is this because Darhk managed to attain — or perhaps even steal — the powers that Reiter is so desperate to acquire? I have a feeling we'll have a much better handle on this complex backstory once Wednesday's episode airs. But the key thing to remember here is, if Oliver manages to pinpoint how Darhk became so powerful in the first place, then he stands a much better chance of finally defeating him once and for all.