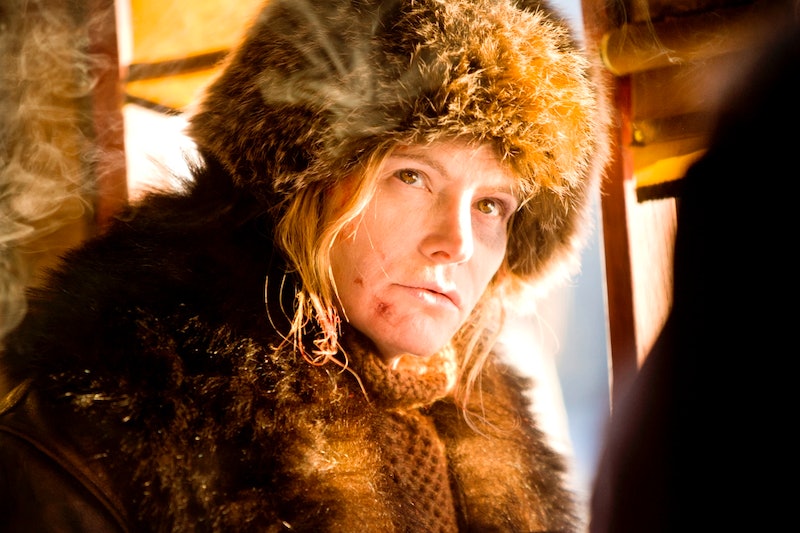 The Hateful Eight, Quentin Tarantino's latest film, took a long time to reach movie theaters. After the script was leaked and posted online, Tarantino briefly declared that he would never make the film. Of course, after fans reacted positively to the leaked screenplay, the Pulp Fiction director changed his tune. Gathering an all-star cast, including Jennifer Jason Leigh (who earned an Oscar nomination for her work in the film, and an ambitious plan to release the movie on 70mm film), Tarantino released the film in December 2015. One month later, the film picked up the Golden Globe for Best Original Score in addition to three Oscar nominations — Best Supporting Actress, Best Cinematography, and Best Original Score. Even with all the buzz surrounding the film, many fans are waiting for it to be available to stream before they commit three plus hours to the film — its official running time is three hours and seven minutes. So, just when will The Hateful Eight be on Netflix?

Given that Tarantino's newest Western is still currently out in theaters, I'd say it's going to be at least six or seven months before The Hateful Eight gets anywhere near Netflix streaming. That said, despite Tarantino's insistence that the film be projected on 70mm film, it's likely the movie will eventually find a home on Netflix, especially given the fact that a fair amount of Tarantino's other hits are already streaming on the platform. So, while you can't go to your Netflix account to watch The Hateful Eight just yet, here are nine other movies you can watch in the meantime.

Tarantino's Western about a freed slave who teams up with a foreign bounty hunter in the Old South is now available for your viewing pleasure.

3. From Dusk Till Dawn

Tarantino co-wrote the script for this Western-style vampire flick, which he also happens to star in.

It's The Hateful Eight, but with Nazis. (OK, that's not true at all, but it does have a cast of crazy characters taking the law into their own hands with guns.)

The first non-Tarantino movie on the list, Lawless is more of a family drama set in the West than an action-comedy-extravaganza (or whatever The Hateful Eight is). It is, however, full of Western lawlessness, guns and blood — oh, and did I mention Tom Hardy's in it?

Again, not a Tarantino movie, but in it, criminals find themselves stuck together "in Bruges" in this dark comedy. It's perfect to tide you over while you wait for The Hateful Eight.

A well-meaning woman and a drifter team up to transport three mentally ill women across the country. Tommy Lee Jones wrote and directed the non-Tarantino Western, which is currently streaming on Netflix.

Volumes 1 & 2 of Kill Bill are streaming on Netflix, just in case you need your Tarantino fix.

If you don't want to wait for The Hateful Eight to be on Netflix, don't forget the movie is still playing in theaters. See it in 70mm if you really want Tarantino to love you.