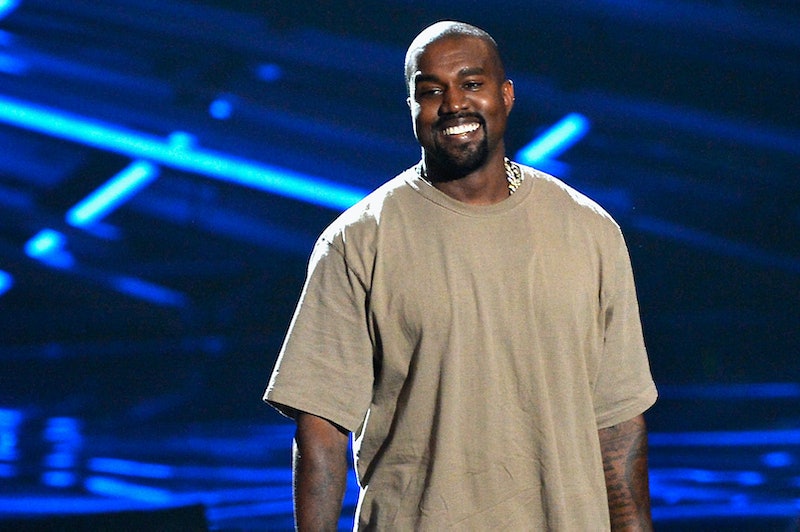 Kanye West had a lot to say on Twitter earlier Wednesday, especially to Wiz Khalifa and Amber Rose — but when he arrived at LAX later on in the day, he was surprisingly quiet. Is it just me, or is this whole situation a total rollercoaster? TMZ was there to greet him as he got ready to board his flight, asking him questions about his new album (formerly known as SWISH, now known as WAVES ), which West was apparently listening to in the parking lot. But, of course, the topic quickly turned to Khalifa, with the TMZ paparazzo trying to get another comment out of West. Specifically, asking West if he was a little hard on Khalifa today.

But, the cameraman was persistent, following West into the airport to ask him if he thought he went a little too far by bringing Khalifa's son with Amber Rose into the feud (West even claimed "You wouldn’t have a child if it wasn’t for me" in one now-deleted tweet). The third time definitely wasn't the charm though. "I told you I said, I said all I had to say," West said understandably a little more angrily this time. "Don't ask me no more questions about it."

Before boarding the plane, the TMZ cameraman thanked West for his time. The rapper then shook the man's hand and asked his name, which may be surprising to some since KWest does not have a good history with paparazzi at the airport — but, like his Twitter rant eventually turned soft when West calmed down, West then apologized to the camerman, saying, "I didn't mean to talk heavy," before offering a show of respect to him, his family and to "all y'all."

Perhaps this is Kanye trying to turn over a new leaf and make those "peace and positive energy" tweets a reality?