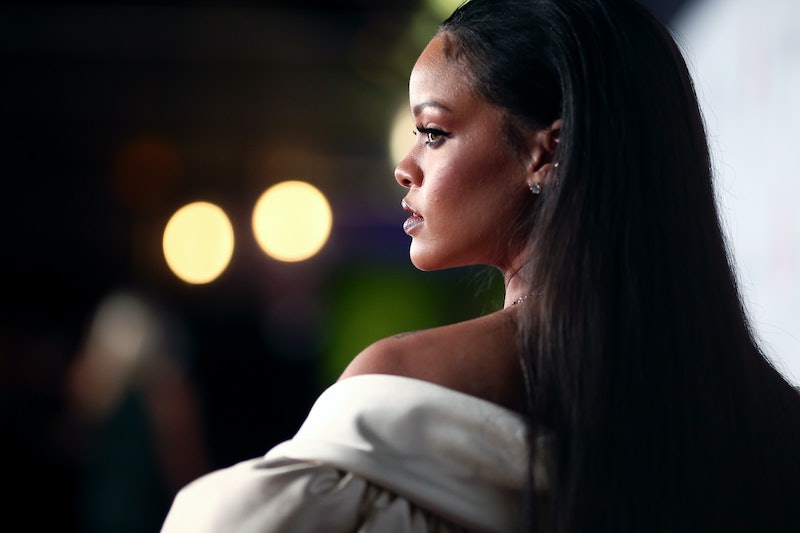 After months of speculation and rumored release dates, Rihanna finally premiered her new album, ANTI , on Wednesday evening. Yes, I know it's hard to believe, but ANTI is actually here! Hallelujah. Somewhat surprisingly, the 27-year-old singer opted not to include the three stand-alone singles she released in 2015 — "FourFiveSeconds," "Bitch Better Have My Money," and "American Oxygen" — on the LP's tracklist. However, the deluxe edition of ANTI (due out Friday), does feature one song that should sound familiar to fans: "Goodnight Gotham." If its name doesn't ring a bell, there's a good reason: As the track's producer, Mitus, explained on Twitter Wednesday night, "Goodnight Gotham" is the new title for "Only If for a Night" (or "A Night") — the Florence + the Machine-sampling song featured in Rihanna's 2015 Dior campaign videos.

The tune formerly known as "Only If for a Night" was an instant hit with fans when clips of it first surfaced online in December 2014, so anticipation to hear the full version was high. Unfortunately, there was a bit of confusion regarding whether or not the song had made the final cut for ANTI. When the album's tracklist was revealed and "Only If for a Night" was nowhere to be found, Navy members quickly took to social media to express their concern:

In fact, even Mitus seemed confused about the song's absence!

Soon, however, it was revealed that there had been a last-minute title change and "Goodnight Gotham" would appear as one of the three additional songs on ANTI's deluxe edition:

Though some fans were disappointed that the track is only a minute and a half long...

...and doesn't feature any of Rihanna's vocals:

According to Mitus, at one point, "Goodnight Gotham" was supposed to open ANTI:

And there were plans to make it into a full song:

And there you have it! The "Goodnight Gotham" mystery is officially solved. Hopefully, fans will get to hear more of Mitus' creation sometime in the near future. ANTI is available on Tidal now.