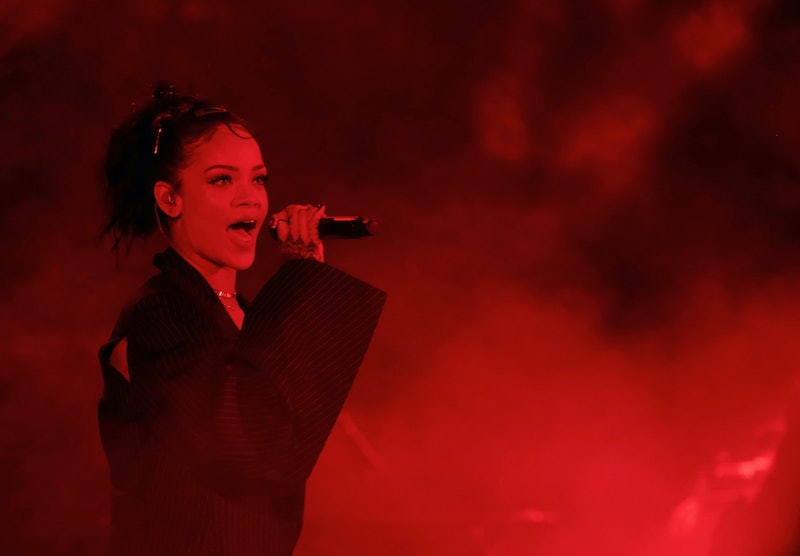 I've loved Rihanna's music since her debut single, "Pon De Replay," hit the airwaves in May 2005 — but I didn't fall in love with Rihanna until I saw her perform live in concert nearly eight years later, in March 2013. Oddly enough, the evening got off to a pretty rocky start: Rih's opening act, rapper A$AP Rocky, cancelled at the last minute, and his replacement was an enthusiastic but off-putting DJ who kept chastising the crowd at Chicago's United Center for not dancing enough. Then, when showtime finally rolled around, Rihanna was MIA.

At this point, the star already had a reputation for making audiences wait, so her tardiness wasn't surprising — but it was quite frustrating. I'd paid good money for those tickets — and I had to work early the next day! After an hour and a half, the DJ stopped his set and the lights in the venue flickered back on. "Maybe she isn't coming," I thought to myself. In my depressed state, the prospect of having to drive home without seeing my idol perform was almost too much to bear. But then, suddenly, the arena went dark again and the crowd erupted in deafening cheers. "Mother Mary" from Rihanna's seventh studio album, Unapologetic, began to play, and lo and behold, there she was standing behind the mic. I was instantly transfixed.

By the time Rih launched into the boisterous "Phresh Out the Runway" just a few minutes later, all of my frustration and anger had been forgotten. She looked as though she were having the time of her life bouncing around that stage; I couldn't take my eyes off of her! I knew she was talented, of course, but I didn't understand just how special she was until that moment. When I arrived at work the next morning, I had a pounding headache and my voice was shot from enthusiastically screaming for three hours straight (which I didn't even realize I was doing at the time) — but it was well worth it. It was a night I'll never forget.

After wrapping up her Diamonds World Tour in November 2013, Rihanna took some well-deserved time off. After churning out seven albums in just seven years, she had earned it. But, because fans had become accustomed to the hit-maker's annual release schedule, the wait for her next project felt agonizingly long. Finally, after months of teasing, countless rumors, and one seriously perplexing marketing campaign, Rihanna's long-awaited eighth studio album, ANTI , arrived Wednesday. As a card-carrying member of the Navy (the collective nickname for Rihanna's fans, for the uninitiated), I wish I could say the LP was worth the wait. I wish I could say that it lives up to the hype, and that you need to check it out immediately... but I can't. Unfortunately, for me, ANTI is a major letdown.

The sing-along melodies and infectious hooks Rihanna has become so well known for are largely absent on ANTI. Instead, the now 27-year-old superstar tries her hand at minimal, electronic-infused R&B, with assistance from big-name producers like PARTYNEXTDOOR, Noah "40" Shebib, DJ Mustard, and Timbaland. The result is a decidedly less-commercial collection than we're used to hearing from her, which I'd be perfectly fine with if the material were consistently compelling... but it's not. There are bright spots ("Kiss It Better," "Love on the Brain"), but ANTI's low points are so low ("Work," "Higher," "Woo"), it was difficult for me to get through its tracklist even once.

Perhaps I should've seen this coming. After all, Rihanna began to experiment with less commercial sounds on Unapologetic, and the title ANTI strongly suggests she set out to record an album that rejects the conventions of Top 40 pop. Still, as someone who is and has always been smitten with Rihanna's voice, how little the songs on ANTI appealed to me on first listen was... well, shocking.

It's natural (and I would even argue necessary) for artists to push themselves creatively and try new things — but they run the risk of straying too far from what drew people to their work in the first place. I'm afraid that's what's happened here. For me, ANTI is missing the spark that makes even Rihanna's more scattered efforts (like Talk That Talk, for instance) work. It's a shame.

But, because I am in love with Rihanna's voice, I have a hunch ANTI will grow on me over time. (Who knows, I may even look back on my initial response to the album six months from now in absolute horror and wonder what on Earth I was thinking! I doubt it, but it's possible.) I've been Team Rih for almost 11 years now, and ANTI isn't going to change that.

I haven't bought tickets for Rihanna's upcoming ANTI World Tour yet, but I haven't completely ruled out the possibility of going. After all, I suspect the light and energy that fills her up when she performs live could breathe life into even ANTI's most lackluster material.

ANTI is available on Tidal now.