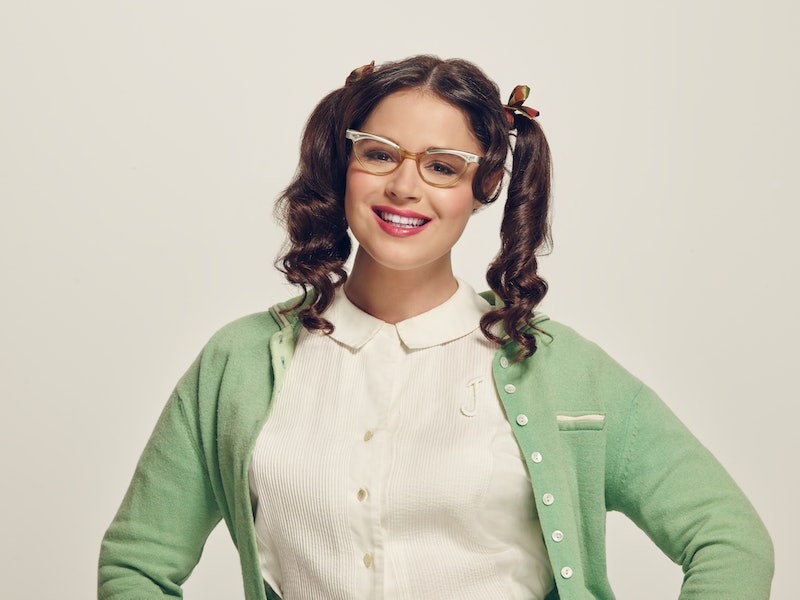 There's a lot of familiar names when it comes to the actresses who play the Pink Ladies in Grease Live! There's Dancing With the Stars' Julianne Hough playing Sandy. High School Musical's Vanessa Hudgens returns to high school once again to play Rizzo. Scream Queens' Keke Palmer is the new and improved Marty, while Carly Rae Jepsen plays beauty school dropout Frenchy. But you may be left wondering, who is playing Jan in Grease Live! ? Well, that would be Kether Donohue, which probably leads to your next question: Who is Kether Donohue?

Donohue is an actress and voice-over artist who currently appears on the FX show You're The Worst as the best friend, who is funny and unapologetic. Basically, she's the worst, but you'll still like her. If you don't watch that show (and you really should), you may have seen Donohue in Pitch Perfect, where she has a cameo as a lead Barden Bella who's not so happy to pass the torch. Or perhaps you saw The Bay, a found footage horror flick about the spread of a parasitic disease. She's starred in a few off-Broadways shows and has made a few TV cameos on shows like the Carrie Diaries, Royal Pains, and Late Night with Conan O'Brien where she played "Pregnant Intern."

None of those ring a bell? Well, then maybe you've heard Donohue's voice in a commercial for Chanel lip gloss, IHOP's stuffed French toast, or Ben & Jerry's ice cream. She's also done some animation work, with her voice popping up on Pokémon. It's safe to say, though, that Grease Live! is her biggest project to date, being that it's on a major network who's been promoting the heck out of it.

But whether you recognize Donohue or not, she's definitely someone who is changing how we see women on TV. She told Bustle back in September that You're The Worst plays with female stereotypes, revealing how ridiculous they can be through humor. "[You're The Worst] pokes fun at the fat best friend with the fat Lindsay, but also Lindsay also gets to be sexy and funny and grotesque," Donohue said. "It’s very rare that you see a woman eating the way Lindsay does on the show." She also added, "What’s great about this show is that there’s really no label on the female character."

It's true, the show isn't afraid to show a woman who is many things — beautiful, disgusting, confused, and hungry — but the reason Lindsay is so great has a lot to do with the actress playing her. It's something she can certainly bring to the character of Jan, who, in the 1978 movie starring Olivia Newton-John and John Travolta, is portrayed as someone who loves to eat but isn't necessarily celebrated for it. In her hands, Jan can actually be multi-dimensional and more than just the "fat friend." Plus, she'll be a seriously good singer.

Donohue showed off her vocal talents on the first season of You're The Worst when her character Lindsay drunkenly did an amazing karaoke version of Kate Bush's "This Woman's Work." Luckily too, since Grease Live! is taking from both the movie and the musical, Jan has a chance to sing more than the "Brusha, Brusha, Brusha" toothpaste song. She could possibly sing a song called "Mooning," and help Sandy out on "It's Raining On Prom Night," if they decide to go that route.

Seriously, the more Donohue, the better since this probably means we'll see her on more late shows, where she can tell more stories about her life. She made her late night debut on Conan recently and managed to tell her apartment fire audition story, which is just one of many things that will basically make you wish she would do more movies or TV specials. It's that good.

More like this
Colin Firth Revealed His Favourite Mr. Darcy (& No, It's Not Himself)
By Sophie McEvoy
'Doctor Who’s New Star Is Already Huge On TikTok
By Maxine Harrison
What’s New On Netflix: A Victoria Justice Rom-Com & The Return Of David Letterman
By Arya Roshanian
Wait, Is Billy *Actually* In 'Stranger Things 4'?
By Gretchen Smail
Get Even More From Bustle — Sign Up For The Newsletter