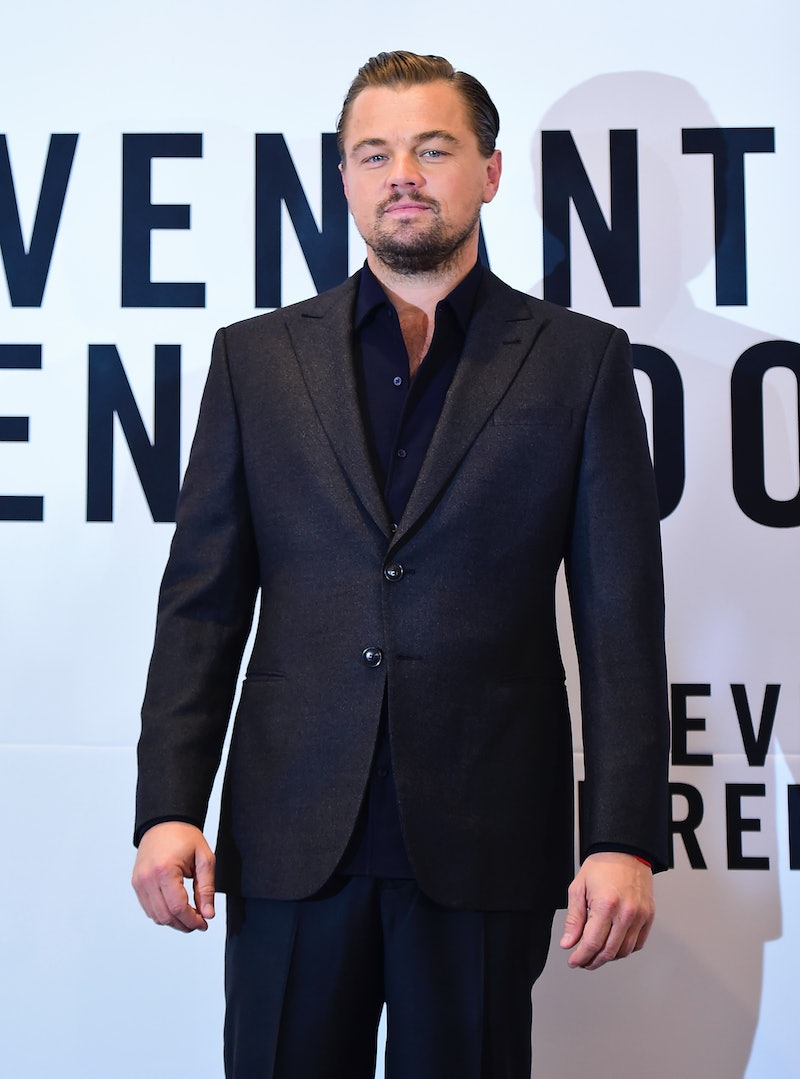 Leonardo DiCaprio is many things: an eternal bachelor, a talented actor, and a passionate environmental activist being just a few of them. It's the latter that consumes much of his off-screen time, with DiCaprio remaining dedicated to promoting earth-friendly lifestyles and initiatives in an effort to create awareness of just how much danger our planet faces if we don't change our ways, and soon. So pressing is this issue in his mind that DiCaprio had a private meeting with Pope Francis at the Vatican on Thursday, Jan. 28, to discuss working together on climate change. Talk about taking things right to the top!

This story gets way better, though. DiCaprio was accompanied to the meeting with Pope Francis by his father, George DiCaprio, and the chair of the Leonardo DiCaprio foundation, Milutin Gatsby. The actor kissed the Pope's ring upon arriving at the Apostolic Palace, before greeting the religious leader in Italian. According to several sources, the actor was inspired by Pope Francis' words on environmentalism and hoped that their meeting could further progress in this area.

DiCaprio also presented Pope Francis with a book of paintings by Hieronymus Bosch, explaining that one of the paintings (perhaps The Garden of Earthy Delights?) had been hanging above his bed as a child. While he admittedly couldn't comprehend the work of art or its significance and message as a child, it did teach him to appreciate the planet we live on for all its beauty, and that's beauty he hopes to protect.

"As a child I didn’t understand quite what it all meant, but through my child’s eyes it represented our planet, the utopia that we’ve been given," DiCaprio can be heard explaining in the video above. "And in the third panel we see a blackened sky, that represents so much to me what’s going on in the environment today. Yet in the back we have Hieronymus Bosch painting planet earth, when many thought the earth was still flat. So it represents to me the promise of the future and enlightenment."

It's unclear whether or not any real progress was made in the meeting — after all, from what we can see in the video, it did seem rather rushed and not particularly conducive to laying any kind of serious groundwork — but perhaps it's a start. I have no doubt that DiCaprio's passion for environmental issues and his dedication for using his celebrity to push real change in the world will come to good, and that he can achieve a lot by being outspoken about these issues as much as possible. Meeting the pope is pretty much as high up as you can go, other than actual lawmakers, so let's hope we see some more work being done to prevent any more destruction of our beautiful planet.

More like this
Rebekah Vardy & Coleen Rooney’s Trial Has Officially Begun
By Bustle UK
Laura Dern Said “Cultural Awareness” Made Her Rethink This 'Jurassic Park' Fact
By Grace Wehniainen
Colin Firth Revealed His Favourite Mr. Darcy (& No, It's Not Himself)
By Sophie McEvoy
Watch The Dramatic First Trailer For Netflix's Jennifer Lopez Documentary
By Alyssa Lapid
Get Even More From Bustle — Sign Up For The Newsletter