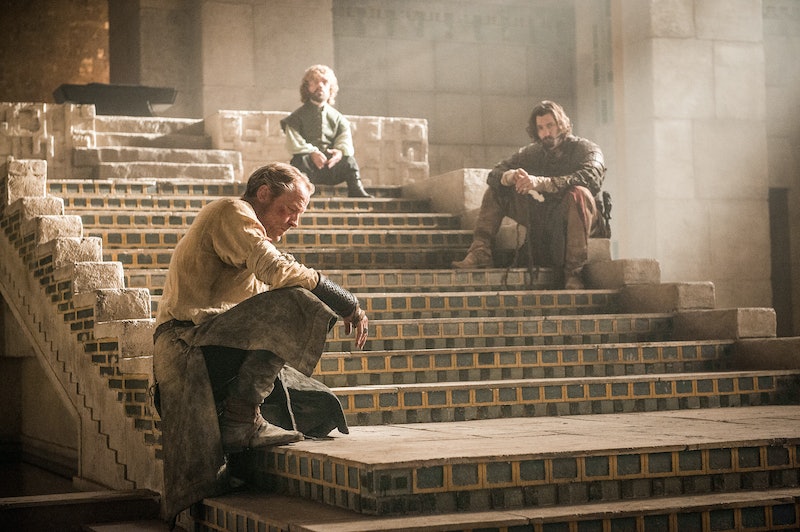 For all of its admittedly massive success, HBO's Game Of Thrones is perhaps one of the unlikeliest TV shows ever created. An unabashedly geeky fantasy saga with dragons, ice zombies, incest, and shocking levels of violence doesn't necessarily sound the recipe for a successful television program. And yet, five years into its run, it has become the most-watched show in HBO history, has won the Primetime Emmy Award for Outstanding Drama series, and is one of the most buzzed-about properties on the small screen. (#JonSnowLives.) So how did it all happen? How did Game Of Thrones become a TV show?

It almost didn't, actually. Unlike most authors, who cross their fingers and hope Hollywood will want to adapt their novel so they can sell the rights for a fat seven-figure deal, George R.R. Martin set out to write A Song Of Ice And Fire actively wishing that no one would want to touch it. Before he started work on his multi-volume epic, Martin was working as a TV writer, scripting episodes for The Twilight Zone and then Beauty And The Beast on CBS. It was his experience working for the small screen that made him want to write an "unfilmable" novel in the first place.

"All of my first drafts tended to be too big or too expensive. I always hated the process of having to cut," he told Entertainment Weekly in an interview prior to Thrones ' premiere on HBO. "I said, 'I’m sick of this, I’m going to write something that’s as big as I want it to be, and it’s going to have a cast of characters that go into the thousands, and I’m going to have huge castles, and battles, and dragons.'" And so A Song Of Ice And Fire was born, starting with 1996's A Game Of Thrones and now clocking in at five books and 4,500 pages... and counting. Martin claims he "had a couple of meetings with other scriptwriters, and most of them wanted to do it as a feature film. Even Tolkien took three feature films, and three Tolkien [novels] are as long as one of my books. That got me thinking, 'How could it be done?' I knew it couldn’t be done as a network television series. It’s too adult. The level of sex and violence would never have gone through."

Enter David Benioff and D.B. Weiss. The two men had been friends since they met in school, when they both attended Trinity College, Dublin. Benioff went on to become a successful screenwriter, penning the script for Spike Lee's 25th Hour and dabbling in adapting an acclaimed novel for the screen with 2007's The Kite Runner, among several others. Weiss focused on more literary pursuits, publishing his debut novel, Lucky Wander Boy, in 2003 to positive reviews.

Somewhere along the way, Benioff found himself holding a copy of a novel called A Game Of Thrones : "I got about 300 pages in and I called Dan [Weiss] and said, 'Have you ever heard of Game Of Thrones? You should read this, because, unless I’m crazy, it’s one of the best things I’ve read in a while,'" he also told EW before Season 1. Two days later, Weiss had finished the mammoth novel and the friends, who "had both been fantasy fans growing up," immediately began brainstorming ways to adapt it.

"We said, 'We don’t know how to do this as a movie.' To do the first book even as a three-hour movie, you’d have to cut 90 percent of it." Even though neither Benioff nor Weiss had ever worked in television before, they knew that HBO would be the best fit for the story, given that it was "such a sexy story." The premium channel was a perfect fit for Martin's material; they already had a few sprawling, violent epics under their belt, including Carnivàle, Deadwood, and Rome.

Before heading to HBO, Benioff & Weiss had a five-hour meeting with Martin in a Santa Monica restaurant, in which they laid out their vision for his series, and their intention to adapt one novel per season in order to give his myriad characters and storylines ample room to breathe. But, reportedly, the author wasn't convinced until the duo was able to accurately answer one question: "Who is Jon Snow's mother?" With Martin's blessing, Benioff & Weiss pitched the series to HBO, who proceeded to purchase the rights to Martin's novels and set the pair to writing the pilot script.

Although Benioff & Weiss quickly submitted their script, the pilot was delayed by the 2007-'08 Hollywood writers strike — but it was eventually greenlit in November of 2008. That may seem like the end of the story... but it's not. Far from it, in fact. Most diehard Thrones fans know that there's an unaired version of the pilot out there. But what most of them probably don't know is that the original version of the first episode almost spelled doom for the show.

After the pilot was screened for the network, "HBO was really on the fence about whether or not they were going to let this go to series," Weiss told Variety in an interview post-Season 5. "Those were four of the longest months of both of our lives — sitting there thinking every day that this thing that was a once-in-a-lifetime opportunity that’s never going to come by again, and we f*cked it up. It would be one of those big fish stories, those one-that-got-away stories, you’d be telling for the rest of your life."

What was so bad about it? I'll let Benioff explain:

God, we got everything wrong on a very basic level with the writing of it. We brought three of our friends over just to get a reaction from them. Watching them watch the pilot was a deeply humiliating, painful experience, because these are very smart individuals, and it just clearly wasn’t working for any of them on a very basic level. At the very end of the pilot, Jaime Lannister pushes Bran out the window. Jaime is lying with his sister, Cersei, and none of [our friends] realized that Jaime and Cersei were brother and sister, which is a major, major plot point that we had somehow failed to establish.

The writing team had to work overtime to convince HBO that they still had a product worth selling. "That first year felt very probationary," Benioff recounted. "It was like, all right, these guys are probably not very good at this. Let’s see what they can do. We’ve already sunk a lot of money into this pilot. Might as well get one season out of it." When some of the actors weren't available to reshoot the pilot, their roles had to be recast; that's why we'll never see Jennifer Ehle as Catelyn Stark or Tamzin Merchant as Daenerys Targaryen.

That second version of the pilot, of course, went on to debut on April 17, 2011, to rave reviews and 2.2 million viewers — a number that would more than triple by the end of the week thanks to reruns and OnDemand viewings. While those numbers pale in comparison to the 8.1 million that tuned in to the Season 5 finale, they were good enough for HBO to immediately renew the series for a second season, just two days after its grand unveiling. And the rest, as they say, is history.