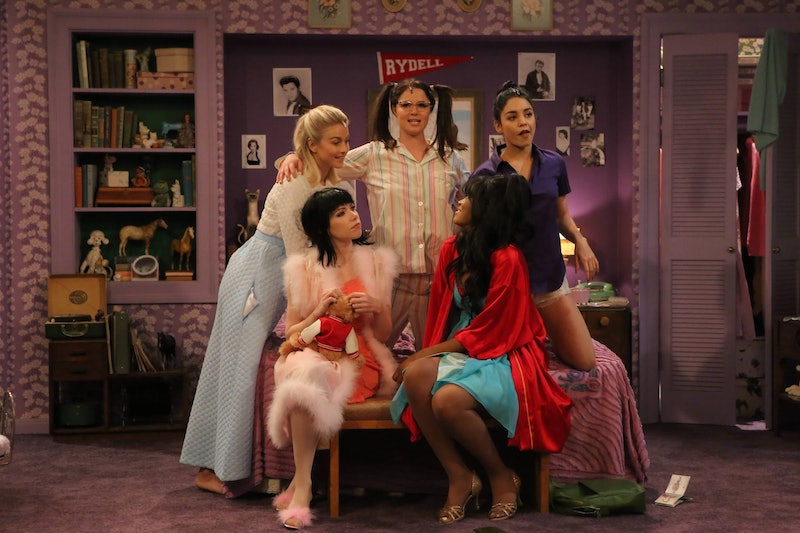 As a huge musical theater fan (read: geek), I've been loving the trend of live televised musicals, since it means so many young actors get the chance to show off their song and dance abilities — and the chance to see a brand-new cast of Rydell High School's popular kids take on the Grease soundtrack is the most exciting part of the upcoming Grease Live! And in a sneak peek of the live performance, you can buy Jessie J's version of the Grease theme. The single, "Grease (Is the Word)" can be purchased for $1.29 on iTunes — and the rest of the cast album looks soon to follow, though they are not available just yet, probably because Grease Live! isn't airing until Sunday, Jan. 31. In the meantime, "Grease (Is the Word)" can also be streamed on Spotify.

Even though "Grease (Is the Word)" is considered the "theme" of the musical, I don't think most people would necessarily pick it as their favorite, with all-time classic show tunes like "Greased Lightning," "Summer Nights" and "We Go Together" to choose from. And, of course, there's the movie-musical original song "You're The One That I Want," which has been added to many performances of the musical following the movie's success — and the song's wild popularity (and it should be in Grease Live!, judging by the iTunes track list).

In addition to the song's availability for purchase/download, Fox has also released a music video for the song, which features Jessie J and the rest of the cast in some behind-the-scenes footage of both rehearsals and recording sessions. And that's a reminder that the major draw to this performance of Grease Live! is the totally stacked cast, who all feature as backup as Jessie J goes for an ambitious version of the song's lead vocals.

From Julianne Hough, who's been in in multiple other musical-movie remakes, like Footloose and Rock of Ages, to real-deal Broadway star (and Les Miserables film supporting cast member) Aaron Tveit, plus other TV stars that it's always amazing to see like Kether Donohue and Keke Palmer. Carly Rae Jepsen has so much live singing experience, she should easily be able to hold her own against the more experienced actors. And, of course, Vanessa Hudgens returning to musicals is like an extension of the High School Musical ten-year reunion.

I'd say all of the above plus Jessie J makes for a pretty solid rendition of a song that doesn't even have a definitive pop culture moment — now I'm curious what their spin on "Greased Lightning" will be... or how heartfelt they'll go with Rizzo's "There Are Worse Things I Could Do"... and pretty much everything else about Grease Live!