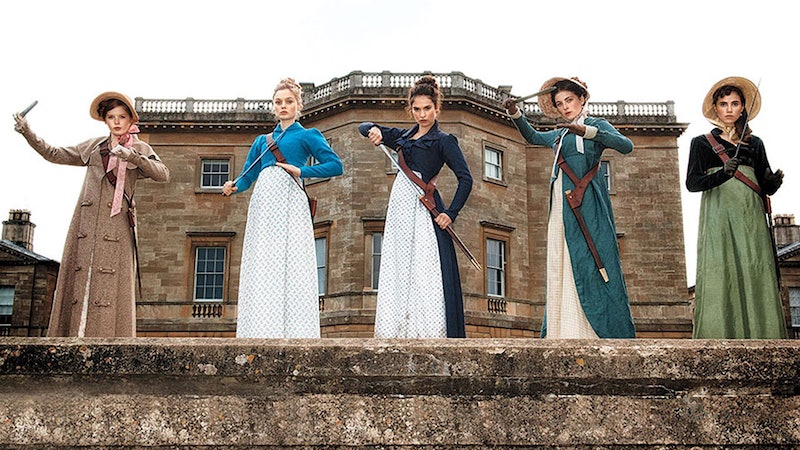 Few books have been adapted to film more than Jane Austen's classic Pride and Prejudice. The story of Elizabeth Bennet making her way through society and relationships in 19th Century England has stood the test of time, and remains one of the most beloved novels ever written two centuries after its original publication. But if you're like me, you've always felt the story was missing one thing: Zombies. Thankfully, the new movie Pride and Prejudice and Zombies addresses this issue, but where did the idea come from? Is Pride & Prejudice & Zombies based on a book, or is it an original work?

Obviously, Pride and Prejudice and Zombies is at least based on the book Pride and Prejudice , but its roots go deeper than that. The film is actually based upon a 2009 book of the same name, a book that Austen would probably be surprised to learn that she is credited as having co-authored, despite the fact that she died in 1817. So how did Austen help write a book that was published 192 years after her death? Could it be that Jane Austen, one of the most widely read and debated authors of all time, has come back to Earth as a zombie to fill her most famous work with her undead friends?

The real reason Jane Austen is credited on Pride and Prejudice and Zombies has to do with the way the novel was written. Author Seth Grahame-Smith, who also penned Abraham Lincoln: Vampire Hunter, took Austen's original work and mixed in content of his own. Specifically, content featuring hordes of the living dead. He worked with the text of the first book, adding to the descriptions and dialogue so that the characters now inhabit a universe where zombies roam the countryside. Elizabeth and her sisters are transformed into a small fighting force, highly-trained in zombie-killing, while Elizabeth's love interest Mr. Darcy is an acclaimed zombie hunter. Makes sense.

According to Grahame-Smith, the original novel was almost begging to have conflict with zombies added to the mix. Here's what he told The Daily Beast in 2009:

"You have this fiercely independent heroine, you have this dashing heroic gentleman, you have a militia camped out for seemingly no reason whatsoever nearby, and people are always walking here and there and taking carriage rides here and there. It was just ripe for gore and senseless violence. From my perspective anyway."

The new take also arguably increases the story's representation of feminism. In the original novel, Elizabeth was an independent woman who refused to follow social norms and instead blazed her own trail, marrying who she chose instead of who was chosen for her. In Pride and Prejudice and Zombies, Elizabeth has more or less the same attitude, but she also knows that she can literally take care of herself, never needing or wanting a man to come to her rescue. As she says in the trailer, "I shall never relinquish my sword for a ring."

More like this
9 Must-Read New Books Out This Week
By K.W. Colyard
The Monster In 'The Essex Serpent' Was Inspired By A Real Local Legend
By Sophie McEvoy
Yomi Adegoke On The Offline Diaries & The Power Of Representation
By Jessica Morgan
Conversations With Friends' Endometriosis Scenes Are As Brutal As It Gets
By Ivana Rihter
Get Even More From Bustle — Sign Up For The Newsletter