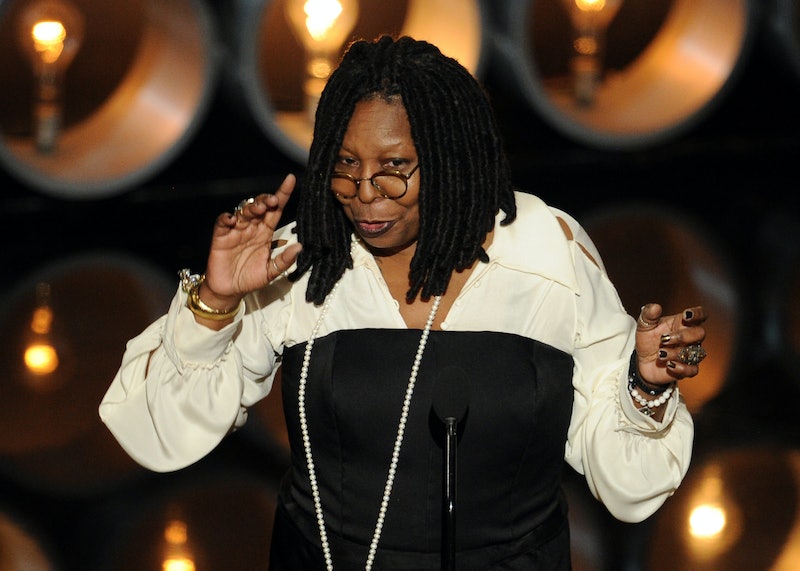 How will the Academy of Motion Picture Arts and Sciences react in the face of the enormous backlash that has ensued after they nominated 20 white performers in the four Acting categories for the another year in a row? That's likely been the question on every award show lover's mind ever since the nominee were announced two weeks ago. Some steps have been admirable — like kickstarting an initiative to increase diversity of membership — but still, considering how long the diversity issue has plagued Hollywood, it's not enough. However, this Thursday, the first batch of presenters for the 2016 Oscars ceremony were announced... and it's actually a pretty diverse bunch!

The list includes five performers of color — Benicio del Toro, Whoopi Goldberg, Kevin Hart, The Weeknd, Pharrell Williams — and six white performers — Tina Fey, Lady Gaga, Ryan Gosling, Sam Smith, Charlize Theron, Jacob Tremblay. (Smith and Tremblay both stand out because one is an out gay man and the other is nine years old, meaning Ryan Gosling is holding the "straight white man" card all on his lonesome.) Of course, more presenters will be added to the mix as the ceremony approaches; usually the total number of presenters is somewhere in the 40s. But, for now, this is a promising mix of diverse gender and ethnicity — even age!

The more cynical among us are likely wondering: Is the Academy only wrangling a diverse group of presenters for its optics, in order to appease the #OscarsSoWhite protesters, or is this kind of diversity typical of an Oscars ceremony? Last year, 15 of the 49 presenters were people of color, or 30.6 percent — much closer to the approximately 37 percent of the country's population that is non-white than the zero percent of non-white acting nominees that year (although still falling short). That list included Oscar winners Lupita Nyong'o and Octavia Spencer, as well as snubbed Selma actor David Oyelowo.

However, since last year also featured an embarrassing lack of diversity in its nominees, that doesn't really answer our question. Let's keep looking back. In 2014, the ceremony (during which 12 Years A Slave took home Best Picture) featured 12 non-white presenters out of 47 total, or 25.5 percent. That's less than last year, but not hugely. I don't know that we can attribute the addition of three non-white presenters to the total as a direct reaction to the all-white acting categories last year. In fact, the farther back we look, the fewer non-white presenters we find, even as the Academy was nominating non-white performers like Viola Davis, Demián Bichir, and Javier Bardem.

In 2013, only nine out of 43 presenters were non-white (20.9 percent); in 2012, only six out 35 (17.1 percent); and in 2011, a mere four out of 33 (12.1 percent). Let's compare that to the last time all 20 acting nominees were white: the 1996 ceremony, when Braveheart won Best Picture. That year, nine out of 42 presenters were non-white (21.4 percent), not including host Whoopi Goldberg — a marked increase over the ceremonies immediately before or after it (with only four non-white presenters in 1995 and five in 1997). Those numbers certainly suggest that the Academy made a concerted effort to feature more non-white presenters in 1996 than was the norm at the time.

In that sense, it's probably safe to say that the Academy may be trying harder to increase the diversity on the stage of the Dolby Theatre this year — but it's also safe to say that that's part of a larger trend rather than a specific reaction to the lack of diversity backlash. After all, the percentage of diverse presenters has increased by 18.5 points in the last five years — an increase that started taking effect long before this year's whitewashed ceremony.

More like this
The Church Of Scotland Votes To Allow Same-Sex Marriages
By Sam Ramsden
25 Quotes About Love To Share During Pride Month 2022
By Madeleine Aggeler and Emma Garza
'Heartstopper’s Kit Connor Revealed Why He Doesn't Label His Sexuality
By Nola Ojomu
'Gentleman Jack’s Cast & Crew Are Keen On Season 3, Too
By Frances Stewart
Get Even More From Bustle — Sign Up For The Newsletter