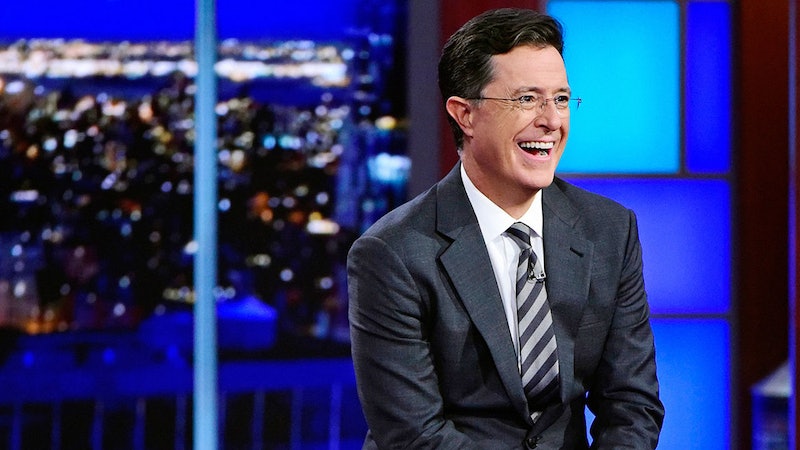 The highly coveted post-Super Bowl television event will belong to none other than the leading man of late night, Stephen Colbert. Of course, because the Super Bowl will be a massively tough act to follow, Colbert and Co. are pulling out all the stops. Sure, the Super Bowl's halftime show will allegedly include the likes of Beyoncé, Coldplay, and Bruno Mars, but guess what Stephen Colbert's post game lineup will include? An impressive set of actors and comedians, that's what! (Plus, Colbert himself, so there's that.) Anyway, back to the point: Will Ferrell, Tina Fey, Margot Robbie, Keegan-Michael Key, and Jordan Peele are stopping by The Late Show set on Sunday, Feb. 7, just after the game.

Colbert announced the impressive Feb. 7 guest list in a series of tweets. Since this is the first ever late night show to premiere after a Super Bowl game, fans (OK, me) are already speculating that some special things will go down. And with a guest list like this? I mean, Will Ferrell or Tina Fey alone would have been enough for me to watch, but add on Margot Robbie, and Key and Peele, and I'm done for. In fact, I'd go as far to say that this is even more exciting than the game itself (but I'm not much of a football fan, so perhaps my opinion should be voided).

Besides the incredible guests (!!!), here are some other reasons why you should get amped for the after Super Bowl Late Show.

As referenced by his tweets (and general demeanor), nothing brings a smile to all of our faces like the smile on Colbert's face. Not even hors d'oeuvres shaped like footballs. (OK, maybe those. Maybe.)

For The Opening Monologue

Laugh inducing, politically satirical, informative... what a nice respite from the previous 7,000 hours of people running into each other and arbitrarily trying to put balls on different parts of grass.

For Colbert's Commentary On The Halftime Show

Praying for something weird to happen so Colbert can put his spin on it. Please!

For Colbert's Commentary On The Commercials

We will need to discuss the oddities of that Budweiser spot.

For The Witticisms Between All The Comics

The rapport between all those comics?! Unsure on whether they will all sit together at once, but here's hoping there will be some crossover.

For The Questions Colbert Will Ask Everyone

Colbert's late night style differs from those of his counterparts in the sense that he seems to be genuinely curious in getting to know his guests, instead of just playing games with them (though no shade, that's fun to watch as well). I'll be on the edge of my seat to hear what questions he has prepared this time around.

No, seriously. All the guests will bring it, I'm sure, but for the sake of being candid, Tina Fey wins everything. That's just a fact.

The Late Show will be broadcast live from the Ed Sullivan Theater immediately following the end of the game.

More like this
Watch Benedict Cumberbatch Lead An ‘SNL’ Medieval History Lesson On Roe v. Wade
By Grace Wehniainen
What Is Jeanie Buss' Net Worth? The Lakers President Is Uber Rich
By Hugh McIntyre
What Is Barack Obama’s Net Worth? He Makes *Way* More Now As An Ex-President
By Hugh McIntyre
'The Spy Who Died Twice' Is Based On A Major British Scandal
By El Hunt
Get Even More From Bustle — Sign Up For The Newsletter