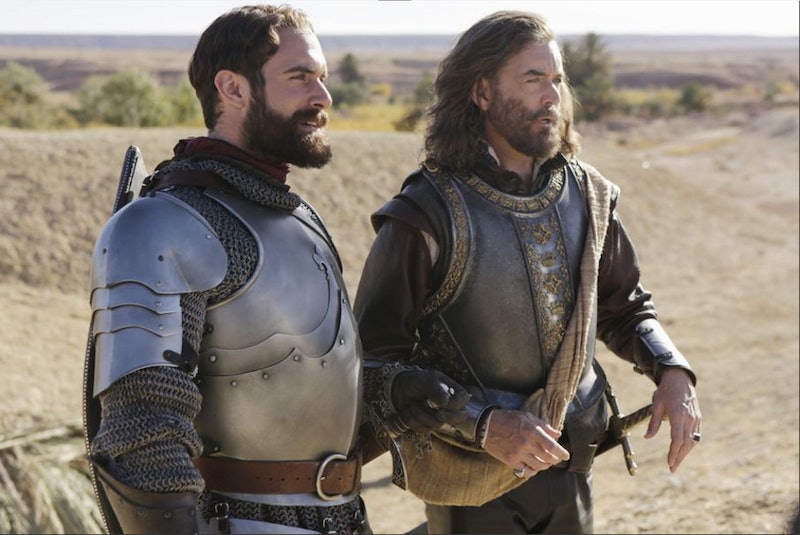 To be honest, my relationship with the season schedule of Galavant is complicated. Every one of the past few Sundays, I've been thrilled to have not one, but two episodes of ABC's medieval musical comedy to ease my end-of-the-weekend blues. But, those double episode nights have made Galavant 's delightfully silly Season 2 go by much too fast. This Sunday, ABC will air the final episodes of this chapter of Galavant's adventure, "The Battle Of The Three Armies" and "The One True King (To Unite Them All)." By the titles and by the trajectory of the hero's journey, I can tell that the show is building to a satisfying finale that will reunite Galavant and Isabella; settle the question of who rules the kingdom once and for all (my money is on Sid being secretly of royal blood); and, for his sake, advance the former King Richard's love life. If all this conclusiveness makes it sound like these episodes could be the series finale, that's because Galavant has not been renewed for Season 3, yet. Update: On May 12, ABC cancelled Galavant, as reported by The Hollywood Reporter.

Earlier: But, fans shouldn't give up hope. Entertainment Weekly reported that the series was renewed for its sophomore season in May 2015, when the fates of a spate of ABC shows were announced. That's over three months after the Season 1 finale aired. That's the good news. The bad news is that Season 2 of Galavant hasn't even been able to match the modest ratings of Season 1. If the network was hoping for word of mouth to spread in the hiatus, that show of faith was unfortunately not rewarded. Still, I'm clinging to the outside chance that another shocker renewal will come through, because these six singing actors need to guest star on Galavant in a potential next season.

Doesn't Galavant need a long lost sister? Or Isabella a childhood friend? With her flair for comedy and actual Disney princess voice, Bell would fit right into the show.

Parker was a Broadway baby growing up in New York City. And though she left key changes behind for Manolos, she could still belt out a tune on Galavant. And, she has princess experience, as you can see from this number from the musical Once Upon A Mattress.

Galavant is a little too used to being the heartthrob of the kingdom. I'd love to see what he'd do if Captain America (and his totally serviceable voice) came to town.

Daniel Radcliffe flung off his Hogwarts robes and hit the stage in the years after the Harry Potter franchise wrapped. In How To Succeed In Business...the actor showed that he had the tenacity, dedication, and jazz hands to make it in musical theater, and maybe in musical television?

Keke Palmer has the kind of pipes that make everyone in listening distance stop whatever they're doing when she opens her mouth. The sweet-voiced actress should follow up her turn as Marty in Grease Live! with a Galavant cameo.

She's already a Dame in the British Empire — that's practically next door to royalty. And she can sang.

But, even if these actors don't grace the show, I'm hoping we'll see Galavant Season 3 sometime next year.

More like this
‘Bridgerton’ Stars Explained Why Season 2’s Big Wedding Made Them So Emotional
By Stephanie Topacio Long
Everything To Know About The Possibility Of 'The Essex Serpent' Season 2
By Rachel Mantock
ITV’s 'Grace' Will Likely Return for A Third Season — & Many More After That
By El Hunt
The Time Traveler’s Wife Book Has A Heartbreaking Ending
By K.W. Colyard
Get Even More From Bustle — Sign Up For The Newsletter